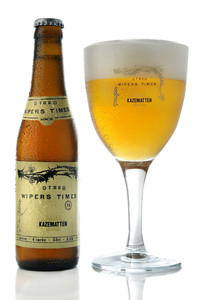 Wipers Times 14 is the first beer from Brouwerij Kazematten. It gets its name from the famous ‘trench gazette’ written by British soldiers during the First World War.

This small newspaper was an exceptional mix of jokes, black humour, sarcasm and poetry, and was very popular with British soldiers serving their country in the trenches of Flanders. It now has a special place in British literary heritage.

Among those herbs is the seed of the Maria thistle, also called the ‘Blessed Thistle’ among many other names, which has medicinal properties. This thistle was shown on the front page of the newspaper and now adorns the label of this beer.

Wipers Times 14 is a top-fermented beer brewed with 100% natural ingredients.

The beer takes on a golden blonde colour in the glass, producing a thin film of yeast and a light pearlisation below a covering of snowy-white froth.

Wipers Times 14 is served in the same chalice that is used for the Grotten Santé beer by Brouwerij De Kazematten.

This beer opens with zesty aromas, and impressions of cheese and vanilla.

It has a very mild and creamy flavour, delicately bitter on the outset, then zesty with touches of vanilla. There is a dry finish.

Wipers Times 14 pairs up well with salads, seafood and exotic dishes. It’s also a great aperitif. Don't be shy to experiment with this one yourself!

You can keep Wipers Times 14 in the bottle for up to 24 months. It can be stored in the barrel for six months.

The specific characteristics of this beer don't make it a "keeper", meaning that extra ageing will not enhance the taste. As with the majority of beers this one is brewed to drink young...

Always store your beer in an upright position in a cool, dry and dark place.

Thanks to the St. Bernardus connection the beers of De Kazematten are available around the globe.

A gift pack is available with a 75cl bottle and a glass at the brewery and via specialised channels.

Grotten Santé
Grottenbier, or ‘cave beer’ was created many years ago by one of the greatest Belgian brewers, the (late) Pierre Celis, the legendary founder of...Hoegaarden. His idea achieved widespread popularity, and has now found a new home ...
Facebook
Twitter
Google
Email
Pinterest
GET LATEST BEER NEWS