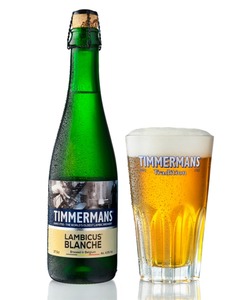 As its name suggests, Timmermans Lambicus Blanche is a cross between a lambic and a white beer. This refreshingly sour thirst quencher is reminiscent of the traditional farm beers brewed in the valley of the river Senne and the Pajottenland region to the south-west of Brussels.

Herbs and spices such as coriander and dried orange peel contribute to the fruity, light, subtly ‘spicy’ taste that is characteristic of white beer. Lambic is a flat beer (low in carbon dioxide) that is made through spontaneous fermentation. It is brewed with barley, wheat and aged hop.

The wort is boiled for two to five hours before cooling down overnight in an open cooling basin. During this cooling-down period, the wild yeasts that are found in the ambient air permeate the wort.

They play a major role in determining the taste and are resistant to alcohol. Once cooled down the beer is transferred to horizontal wooden barrels, usually made from oak, which are commonly known as pipes or used to fill large foeders. In either case, fermentation continues for several more months, if not years.

Lambic is traditionally brewed from late September to late April at a temperature below 15°C, as these circumstances ensure that the wild yeasts are present in the right proportions.

Timmermans Lambicus Blanche is a spontaneously fermented beer. No yeast is added as part of the brewing process.

The wort ferments in an entirely natural way; by coming into contact with the specific ambient microflora during the cooling down process in an open basin.

Timmermans Lambicus Blanche takes on a pale/golden yellow hue in the glass, covered by a cloud of snowy white froth.

Timmermans Lambicus Blanche is served in a robust lambic glass with a ridge pattern.

This thirst quencher yields surprisingly zesty and fruity aromas with impressions of coriander and orange zest. Slightly sour with a subtle hint of spices.

Recommended with zesty dishes from Asia, a scampi curry for example.

Nobody knows how long gueuze can be kept but as this is a blend with wheat beer this one can be stored for up to 18 months in a cool, dry and dark cellar.

Available in 37.5cl bottles and from the tap (15l). The brewery is part of Anthony Martin's Finest drinks which also includes the Bourgogne des Flandres and Waterloo breweries.

The company goes back over a century and started off as an importer and distributor. This means they know how to get beer on a shelf near you; you will have no trouble finding this beer outside of Belgium via the usual channels.

Timmermans Kriek Lambicus
Timmermans, the oldest lambic brewery in the world still in operation, offers an amazing range of lambic beers enriched with the aromas and flavours of strawberry, raspberry, blackthorn, peach and krieken cherries. The lambic, wh ...