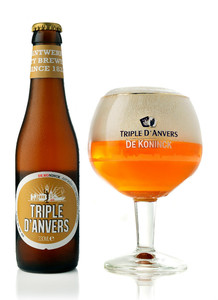 This beer’s complexity is first picked up by the nose. The beer has a slightly herbal touch, with a fruitiness from the yeast used – think aromas of pear and ripe banana. Pale malts and caramelised malts are also beautifully balanced here.

Initially, the De Koninck Tripel d’Anvers comes across as slightly sweet, but with a good equilibrium between hop bitters and fruitiness. This tripel owes its lively sparkling to the re-fermentation in the bottle, giving the beer its complexity and depth, with a lingering finish.

Tripels are a speciality of Belgian breweries. Belgian tripels have a predominantly golden blond colour, a shade darker than the strong blond beers, and contain a high volume of alcohol.

De Koninck Tripel d’Anvers is a worthy heir of this great tradition. Full in the mouth, as a real tripel should be, but very drinkable and a great thirst-quencher, all the same.

De Koninck Tripel d’Anvers is a high fermentation beer. The initial fermentation is held at temperatures between 25 and 27°C.

The beer will then re-ferment in the bottle; just before bottling, sugar and yeast are added to speed up re-fermentation.

De Koninck Tripel d’Anvers gives a golden blond colour in the glass. The beer is clear and does not have yeast deposits.

De Koninck Tripel d’Anvers is served in its own bulbous glass that depicts the Antwerp skyline.

This beautifully thirst-quenching tripel stands out due to its fruity aromas, the subtle interaction of the pale and caramelised malts, and the excellent balance achieved between hop bitters, fruitiness and a clean freshness.

This tripel is also a great companion with desserts including banana and white or milk chocolate.

This tripel can be stored for two years, which is one year longer than the bottled 'bolleke'. On tap it will keep for nine months. Always store the bottles in a vertical position in a dark and cool room.

There is no point in keeping this beer for longer, as there will be no further positive evolution in taste.

De Koninck Tripel d’Anvers is available in 33cl bottles and in 20 litre barrels This brew may be slightly harder to find than the classic 'bolleke'.

Nevertheless the beer is relatively easy to get hold of through the usual channels – specialised beer shops and drinks stores.

De Koninck
This Antwerp classic, launched over a century ago in 1913, catches your eye straight away. That's thanks to its intense mahogany colour and its robustly frothy collar. De Koninck has a complex aroma, with touches of toffee, chest ...