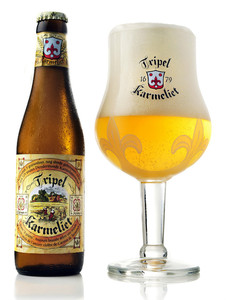 The Carmelites from Dendermonde in East Flanders were brewing a three-grain beer in the 1600s. This information, published in a recent book on local brewing history, happened to come to light after Brouwerij Bosteels (located in Buggenhout) had decided to start brewing a three-grain beer as its next specialty. It was only after the beer was created that the name of the Carmelites was linked to the beer.

Tripel Karmeliet was launched in 1996 and was received to great and fully-deserved acclaim. It is a Tripel (8.4 % in volume), but brewed with barley, wheat and oats. It could even be considered a six-grain beer as each of these grains is used in their raw as well as malted form.

In 2008 the beer won a Gold Medal at the World Beer Awards which led to demand exceeding supply, although production had already been increased by 30% by then. 2012 saw a number of cafés once again run out of supplies owing to the huge success of this popular tripel.

Colour varies from gold to bronze with a beautiful clarity. When poured correctly, this tripel will form an impressively voluminous and creamy head that lasts for a long time.

Tripel Karmeliet is served in one of the most elegant beer glasses to be found in Belgium. The glass was designed by Antoine Bosteels, one of the managers of the brewery, and is decorated with a stylised French lily or fleur-de-lys. The flower is used as a traditional decoration motif and not as a symbol of France

This three-grain beer brewed with Steiermark hops has good herbal flavours. It owes its fruity character (banana and vanilla) to the home-cultured yeast.

The vanilla mingles with the orange-like aroma from the hops. Not only does it have the lightness and freshness of the wheat, it also has the creaminess of oats and a herbal, lemony dryness almost reminiscent of quinine.

There is plenty of citrus in the note, also bitter lemon and sugar. A bit of malt on the tongue combined with sweet ripe fruit - exotic like banana. The finish also offers light citrusy touches but sweet malts as well.

The citrus aromas and the ripe fruits are beautifully complemented with ginger. This degustation beer makes a perfect pairing with mussels, served with black and white rice for example.

It can also be used in the preparation of certain dishes, for example to add to stock for cooking mussels.

The best before date on the bottle indicates 24 months. Like DeuS, the taste of this beer will not improve by longer storage periods. Simply put, this beer is brewed to be consumed.

Tripel Karmeliet is available in 33cl and 75cl bottles and on tap. Without a doubt, it is the most popular beer produced by Bosteels. Despite rumours that demand exceeds supply, this beer is widely available throughout Belgium.

It can be found in cafés, specialty stores and supermarkets. Just like the other Bosteels beers, you may come across it far outside the country.

Pauwel Kwak
In the 18th century there was a very well-known brewer in the Dendermonde area; his name was Pauwel Kwak. He brewed his own beer, which was dark and heavy. He also has had a coaching inn on the road between Mechelen and Gent, wher ...

DeuS Brut des Flandres
DeuS Brut des Flandres is a unique brew that was introduced to the world in 2002. It is a sparkling, honest and pure beer created with just water, yeast, malt and hops. The carefully selected yeast cultures add a mild taste of gin ...
Facebook
Twitter
Google
Email
Pinterest
GET LATEST BEER NEWS