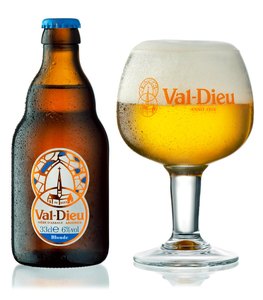 Belgium is proud of its abbey beers and their centuries-old tradition. These include the beers brewed by Val-Dieu, near Liège. The current brewers were inspired by the traditional recipes created by the monks.

In the Val-Dieu Abbey, the brewery is located within the walls of the abbey, which is the exception rather than the rule nowadays. These beers have two main characteristics: all of them are produced using the infusion method and all re-ferment in the bottle.

Val-Dieu Blonde is an enjoyable thirst-quencher. Using Belgian criteria, it is classed as a relatively light beer that will please most if not all drinkers. This blonde makes for a refreshing aperitif and is also well suited to accompany a meal or finish it off nicely.

The beer has a slightly bitter taste that is pleasant without drying out your taste buds. Val-Dieu Blonde can be served chilled.

Val-Dieu Blonde is a top-fermented beer that re-ferments in the bottle.

Val-Dieu Blonde has a slight yeast cloud. This gold-coloured beer is topped with an abundant white head of froth with fine pearlisation. Despite its delicacy, this head stays around for quite a while.

The chalice used to serve the Val-Dieu beers is reminiscent of Christian liturgy, giving the beer an allure that is almost sacred. Engraved at the bottom of the glass are the linked rings, the emblem of the brewery. If you are lucky, you will see the shape of the double rings slowly materialising on the froth when the beer is poured.

This beer will impress you with its fruity aromas of banana and cuberdon (fruit gum) sweets. You will also come across floral traces and citrus and spice tastes.

This beer goes easy on the malt and is only slightly bitter with an unobtrusive alcohol content. In summary: a refreshing thirst-quencher.

Val-Dieu Blonde is a refreshing aperitif beer that will also provide a beautiful finish to a meal. At the table, this any-occasion beer will suit a wide range of dishes.

If you want to try it with its own local dishes, go for a pairing with a cheeseburger covered in Val-Dieu cheese, a chunk of Herve cheese or a Herve soufflé, a quiche with Aubel ham seasoned with lovage, coquilles St. Jacques with chicory, cod fillet with grilled vegetables or smoked trout with a fennel salad.

In the bottle: 24 months. On tap: 9 months. Bottles should be stored in a vertical position.

The beer can be stored for up to three years after bottling without the taste or colour being affected. The beer should be kept in a cool, dark place.

Val-Dieu Blonde is available in 33cl and 75cl bottles and on tap (20l). As the brewery also exports their beer you will be able to pick it up abroad via the usual channels.

Val-Dieu Brune
The beers of Val-Dieu subscribe to the rich tradition of Belgian abbey beers. The brewer’s inspiration is found in the recipes laid down many centuries ago by the monks. This is no coincidence. This abbey site has been home to br ...
Facebook
Twitter
Google
Email
Pinterest
GET LATEST BEER NEWS