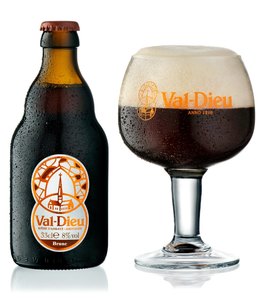 The beers of Val-Dieu subscribe to the rich tradition of Belgian abbey beers. The brewer’s inspiration is found in the recipes laid down many centuries ago by the monks. This is no coincidence.

This abbey site has been home to brewing activity since human records began and, to this day, the Val-Dieu beers are brewed within the abbey walls. Tradition is felt strongly here. Beer is produced using the tried and tested infusion method and all Val-Dieu beers re-ferment in the bottle.

The beer style of the Val-Dieu Brune is occasionally described as a ‘dubbel’. This usually indicates a traditional top-fermented beer that re-ferments in the bottle, with a medium brown to dark brown colour. However, make no mistake, this all-purpose beer turns out to be surprisingly rich and complex once tasted.

The Val-Dieu Brune has plenty of body and offers slightly sweet impressions coupled with hints of bitterness. Store the beer for a number of years and you will be rewarded with developing aromas of red fruits and Madeira wine.

The brewery of course produces more than just "La Brune" so if you like this one why not taste their La Blonde, La Triple, their Grand Cru and (seasonal) Winter.

Val-Dieu Brune is a top-fermented beer that re-ferments in the bottle.

Once poured, Val-Dieu Bruin takes on a slightly cloudy dark brown colour topped by a delicate cream-coloured head of froth.

The imposing chalice that bears witness to a great tradition also contributes to the experience. Gaze down into the bottom of the glass and you will discover the beautifully engraved double-ringed symbol, the emblem of the abbey. If you are serving the beer correctly you should see the double-ring symbol materialise slowly but clearly on the frothy head.

Val-Dieu Brune is a rich and complex beer offering a multitude of aromas: strong impressions of banana and cuberdon sweets (a Belgian fruit gum sweet), in addition to caramel, chocolate, coffee (mocha) and traces of smoke.

This balanced beer has plenty of body with sweet touches as well as traces of bitterness, complementing one another without ever becoming overpowering. This beer must not be served too chilled. Its taste and aroma of this beer are best enjoyed at room temperature.

The mild Val-Dieu Brune makes a great pairing with firm and robust cheeses such as the local Herve cheese, blue cheeses of the Roquefort type or a Vieux Comté.

When it comes to main courses, classic regional dishes spring to mind: pork chops, venison, sausages, tripe or black pudding. Also, this dark beer, with its aromas of chocolate and coffee, goes down very well in combination with a chocolate dessert.

Val-Dieu Brune will keep in the bottle for 24 months and 9 months on tap. Bottles must be stored vertically in a cool and dark environment. The beer can be kept for up to three years after bottling without its taste or colour being affected.

Val-Dieu Brune is available in 33cl and 75cl bottles and in the region around the brewery itself you will also have no trouble finding it on tap (20l).