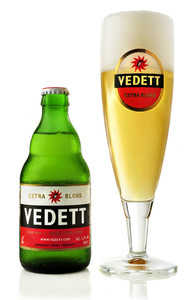 Duvel-Moortgat has been brewing export pilsners for many years, and right up to the present-day the brewery has been well-known for its BEL pils.

The Vedett Extra Blond brings all this pils experience together, but represents, without a doubt, the Duvel-Moortgat brewery’s quirkiest and most out-of-the-box brand. The beer was refreshed and re-launched in 2003, but it has been in production since the 1940s.

Its fresh appearance incorporates everything you might expect from a premium pilsner: straw-coloured with a snowy-white head, and beautiful pearlisation in the glass. It’s an excellent thirst-quencher, right from the first mouthful, which is immediately followed by a subtly bitter aftertaste.

Both the aroma and the taste of this beer are characterised by a finely-balanced hoppiness, with a slight touch of vanilla and a fruitiness that carries through to the finish.

The mildly malted character remains pleasantly in the background, which gives the beer an outstandingly refreshing taste without losing its full mouth feel.

The beer is most often served in a stemmed Vedett flute glass, but is occasionally served in a smaller, more compact Vedett glass. The brewery also recently launched a series of 'fantasy' glasses in all shapes and sizes.

A pleasantly hoppy and slightly malty aroma. An unusual taste, dominated by the hops’ powerful bitterness. Fairly dry with a hint of lemon.

This beer will keep for one year after bottling, or for nine months on tap, without the taste or colour being affected. It is best stored in a cool and dark room.

However, in common with all pilsners, a Vedett is best drunk when it is as fresh as possible.

Vedett Extra Blond is available in 33cl bottles and also on tap (in the UK and France only). Vedett is represented at a number of events, where you will have the chance to grab your own personalised bottle, with your picture on the label.

As Vedett takes up a prominent place within the Duvel range – and is exported widely – this beer is very easy to get hold of, both in Belgium and abroad. The brewery also has Vedett on its own web-store.