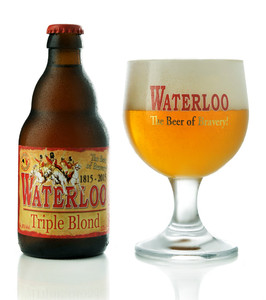 We Belgians are keen on our ‘tripels’. And we enjoy our strong blond beers. The use of the term ‘tripel/triple’ denotes beers with larger amounts of ingredients added to the mash, but over the years ‘tripel’ has turned into rather a generic term than a specific beer style.

Waterloo Triple Blond is a testament to bravery on two sides, a reference to the famous battle that took place in 1815 in the vicinity of the Ferme de Mont Saint-Jean where this beer is brewed today.

Waterloo Triple Blond is a typically Belgian tripel, a sturdy thirst-quencher with plenty of complexity too. At the first tasting you will be amazed by the sweet touch assaulting your taste buds.

Not far behind is the hop-bitter taste that permeates your palate all the way down to the back of your mouth.

Visit the Ferme de Mont Saint-Jean and you can almost hear the cannons booming. During the battle of Waterloo British troops received medical treatment in a field hospital at the farm.

Fortnately these days the only bombardment is that of our taste buds as we sip from a stone chalice. Hop bitter mingles with the subtle character of the malt. Is this proof of the courage of the brewer?

Waterloo Triple Blond is a golden-yellow beer, clear with a slight pearlisation in the glass, under a sturdy head of creamy froth.

Waterloo Triple Blond is served in its traditional, artisan stone chalice or in a branded Waterloo chalice-shaped glass.

This tripel yields surprisingly fruity and zesty aromas of hops, reinforced by hints of green apple and lime tree.

The initial taste is sweet but then the hop comes to the fore, displaying its complexity and subtlety with the support of the delicate, versatile malt.

This is a beer that tastes full in the mouth and packs quite a punch.

Will keep in the bottle for 24 months. On tap, 9 months is the recommended storage period.

As with all tripel-styled beers this one should not be stored for prolonged periods; it is a beer to savour within the time frame recommended by the brewer.

Brasserie de Waterloo is part of the John Martin Group, famous for their Timmermans and Bourgogne des Flandres beers. This means that due to the distribution and export activities of this brewery group you should have no trouble picking up this beer in both Belgium or abroad.

Waterloo Récolte
Waterloo Récolte is a traditional Belgian farm beer, in the same family as saisons from Hainaut or the white beers of the Brabant region. All the ingredients can be sourced from the fertile fields around Waterloo and in the near ...