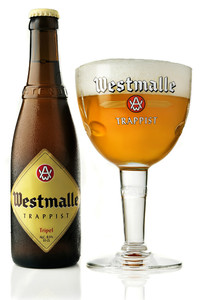 In 1934, the successful opening of the new Westmalle brewery was celebrated with a ground-breaking new ‘super beer’, brewed on the very same premises. Widely acknowledged as the first 'tripel' in the world, it was based on a recipe by Henri Vanderlinden, master-brewer of nearby Witkap in Brasschaat. He was then acting as an advisor to Westmalle.

The word ‘tripel’ makes reference to the fact that ingredients are used in quantities larger than usual. It is a strong, predominantly blond beer with a strong taste of malts and/or hop bitters. You can tell the Westmalle Tripel from the Dubbel by its label, which looks antique and yellowed, and the bottle cap in the same colour stamped with the brewery’s initials.

The Tripel has since turned into something of a ‘deerne’ (or a beloved wench) by its ever-growing horde of fans It was also given the pet-name of ‘champagne campinoise’ – the champagne of the Kempen. At the same time as the Tripel, the characteristic 33cl bottles, with the ring around the neck, were introduced.

This beer was considered to be very strong, especially in comparison with what else was being brewed around that time. The Westmalle Tripel continued to build on its characteristically strong and refined character, by using only natural ingredients in the brewing process – such as real hop flowers from Eastern Europe – and the highest quality barley malt.

Many decades on, this brew is still worthy of one of her other beloved nicknames – ‘the mother of all tripels’ – with her dominant but refined hop bitterness combined with a fruity sweetness. She could also be considered a mother with many children: the tripel-style is one of the most popular styles with budding hobby brewers, both in Belgium and far beyond its borders.

Westmalle Tripel is a high fermentation beer with in-bottle re-fermentation.

This beer is brewed with barley malts, hops, sugar, yeast and water.

Its deeply golden-yellow colour brings to mind the vivacity of autumn colours. If this beer is poured at a low temperature, a cold cloudy mist may be seen shimmering in the glass. All of this is topped off with a luxurious, but delicate, collar of creamy froth – the not-quite-white jewel in the crown.

Traditionally served in the Westmalle chalice, with the characteristic raised 'Westmalle trappist' inscription in relief gold. It is underpinned by the winged brewery logo, sporting the brewery’s initials. At the top of the stem of the glass you will find the ring which also famously adorns the 33cl bottles.

This Triple lures you in with its sweet banana aromas, but then provides a hoppy bitterness as a background to the aroma symphony. Its malty body is enriched with yeasty alcohol esters and hop flowers. The character is predominantly herbal and earthy but, it is enlivened by CO2 pearls, ensuring a lively character overall.

A stew made with this Trappist beer could really be a classic from Grandma’s kitchen – that is, if your Grandma is from the Kempen. A chilly autumn day calls for just such a beef stew, thickened with 'peperkoek', accompanied by crushed potatoes, and a salad of chicory on the side.

This tripel is also an ideal match for another Belgian classic: chicory rolled in ham, covered in a béchamel or cheese sauce and braised in the oven. Taking gastronomy up a notch, guinea fowl with a sauce of bitter almonds, accompanied by rice croquettes – or sole accompanied by shrimps in a creamy sauce – will make a perfect pairing.

Best stored in a dark and cool space. Take note of the best-before date. This brew’s hoppy character will diminish the longer it is stored. The taste of small (33cl) bottles will evolve differently from that of the larger ones (75cl). In contrast to Trappists beers like the Rochefort 10, or the Westvleteren 12, this beer is not one to experiment with by storing it several years.

While its Westmalle companion beer, the Dubbel, is one of the few Belgian Trappist beers available on tap, sadly this isn't a delivery channel that applies to the Tripel. Consequently, Westmalle Tripel is only available either in small bottles (33cl) or in large 75cl bottles.

That said, alongside possibly the Chimay beers, the Westmalle beers are probably the most widely distributed of the Belgian Trappists. The Tripel should therefore be easy to get hold of, both in Belgium and far beyond its borders.

Westmalle Dubbel
It was Prior Alexius who, at the start of the 19th-century, decided to motivate the Westmalle brothers with his so-called 'liquid sandwiches'. Every single morning he would offer breakfast accompanied by two glasses of beer ...
Facebook
Twitter
Google
Email
Pinterest
GET LATEST BEER NEWS