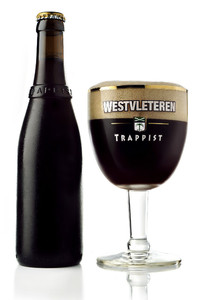 Westvleteren 12 (XII) - The legendary, close to mythical Trappist from the Sint-Sixtus Abbey of Westvleteren. Global winner of a wide range of titles, prizes and medals, acclaimed by many, desired by the masses.

Their first title of Best Beer In The World, awarded in 2005 by ratebeer.com, triggered and fueled a hype as never witnessed before in the entire history of beer. The street where the abbey is situated could not handle the traffic and was made one-way shortly after winning the Best Beer award.

The fame of Westvleteren 12 (Abtsbier),has (had) an undeniable and recurring effect on the popularity of Belgian Trappist - and specialty beers worldwide. To us, this is the true added value of the beer.

It’s the heaviest and most prestigious of the beers bottled by the monks in Westvleteren. It can be recognised by the yellow cap (none of the Westies carry a label). The exact variety or mixture of hops is not disclosed by the monks of Sint-Sixtus, but they’re local. They started making beer not that long after the monastery got established in its current form back in 1831.

This wasn’t immediately the Westvleteren as we know it today. Back then it only had an alcohol percentage of 2% ABV, so in fact it even was a different beer all together. The production of the much worshipped Westvleteren 12 dates back to the beginning of World War II.

According to some it’s somewhat overrated, the hype may have been (and still is) a bit over the top. And granted, there are a lot of great and even better beers out there. But still, this really is one of the best beers in the world, it has become bigger than tradition or craftmanship.

Westvleteren 12 is more than just the Sint-Sixtus monks life-supporting flagship…it can truly be called a Belgian national beer treasure.

A dark, though clear, reddish/burgundy brown.

Trappist Westvleteren serving glass, there is really no alternative for this beer.

Balanced taste, exceptionally complex with an aftertaste that lasts and ends with a dry finish. A taste and experience that is as individual as the person drinking it.

The beer certainly is worth pairing up with a cheese called Trappiste de Belval. This is a traditional French Trappist cheese made by female monks belonging to the same order as the Sint-Sixtus Abbey.

The cheese itself is also special as it gets treated and refined with beer from Westvleteren. A true and new taste goal to set for any gastro-orientated Westy fan.

You can actually find an array of local Belgian products made with Westvleteren, from chocolate truffels to desserts. Although the 12 is a versatile beer to cook with. It just comes down to the fact that anything marked Westvleteren sells.

As the province of West Flanders has a high density of top restaurants you can be certain to find a Michelin star chef using the beer in one of his dishes.

This is one of the great beers to store and age in optimised conditions, it can without a doubt be kept for decades. This again depends a lot on personal taste, some beer enthusiasts find the Westvleteren 12 best between 2 and 5 years.

What is certain is that this is a 'must have' beer to complete your cherished collection of cellar beers. The taste continues to evolve, it develops a more pronounced character and takes on some wine-like characteristics as with many beers that age well.

A Westvleteren 12 that has aged for 10 years will keep much of the same aromas and tastes. A lot of them, not to say most will just have gotten stronger and more complex over time.

The hop bitterness on the other hand will have completely faded as well as most of the carbonization. The sweetness will have stayed and will be more noticeable.

The alcohol becomes somewhat port-like and it becomes an overall thicker, much browner and richer beer. We predict that in twenty years from now, people will be paying small fortunes for a case of aged Westvleteren 12. The hype is definitely here to stay.

Its availability, or rather the lack of, is a legend completely on its own. Westvleteren 12 is one of the most exclusive beers in the world, even the serving glasses are rare. This means you need to be very patient to order and buy a crate directly from the Sint-Sixtus Abbey.

Since September 2006 the beer also needs to be ordered by phone. This is only made possible at set times and dates. The exact window of opportunity is advertised on the Sint-Sixtus site as well as the type of beer and number of cases you may be able to get.

In order to make it a bit of a challenge, there’s only a single phone line available and the monks of Westvleteren don’t do e-orders…That means, that in reality only 1 or 2% of the callers actually get through with an average result of 45 non-frustrated customers per day they take calls from.

Officially it’s only for sale through the monastery and at the visitors center “In de Vrede”. There you can taste their Trappists or even buy a six pack of Westvleteren of their beers.

When and if you finally succeed in placing an order, you get to buy and pick up one, two or maybe even three of the classic wooden cases, holding 24 bottles each. The number of cases and the kind of beer you get depends on what they have available, it is not always the 12.Oh…and you’re also asked NOT to resell your order.

However…without having seen statistics on the subject, this must be one of the most resold and traded beers around. Westvleteren 12 has developed its own global, out-of-control, micro-beer economy. So you will be able to buy it online, get it from specialised beer shops and resellers or drink it at (very) specialised beer cafés - but this will come at a certain extra cost, what else did you expect?

There have been reports of cases of Westvleteren 12 getting sold off at €400 locally and even $800 in the US. Because Westvleteren is such a cash cow beer some have even started selling it under the counter at specialised bars and cafés around Belgium. The black market revenue this beer generates is huge.

Westvleteren Blond
Westvleteren Blond - The lightest beer of the Sint-Sixtus family, when confined to its bottle, only to be recognized by the green cap topping it off. This is the beer that the monks themselves drink as their day-to-day thirst quen ...

Westvleteren 8
Westvleteren 8 is 12’s little and lesser known brother. It’s sadly also sometimes less appreciated, and is said by some to be the least popular (recognised by its blue bottle cap) of the active varieties made by the Sint-Sixtus mo ...
Facebook
Twitter
Google
Email
Pinterest
GET LATEST BEER NEWS