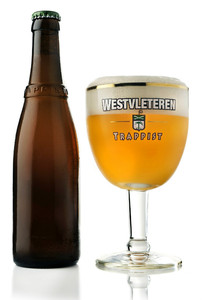 Westvleteren Blond - The lightest beer of the Sint-Sixtus family, when confined to its bottle, only to be recognized by the green cap topping it off. This is the beer that the monks themselves drink as their day-to-day thirst quenching brew.

They use to have the Westvleteren 6 (red bottle cap – dark beer – 6.2% ABV) for that purpose (and before that they even had a Westvleteren 4!). But… they sadly stopped brewing it back at the end of 1998, beginning of 1999. No need to even starting to explain how hard it would be just trying to get hold of a single bottle…

Like always with Westvleteren, we don’t know anything about what’s actually in the brew. The 3 varieties of local hops and the yeast from Westmalle are the only things we’re certain of, for the rest your guess would and should be as good as ours.

There are enough clones around, who try to imitate Westvleteren, so maybe you can check them to complete your recipes. Or you can also not bother… and leave it an enigmatic and romantic mystery.

The fact however remains that this isn’t a beer to be copied, imitated or cloned. It isn’t even possible comparing it to the Westvleteren 8 or 12.

It’s a different beer altogether, to see and appreciate the true quality of this world class blond it needs to be compared with similar styled blonde beers with a similar alcohol percentage.

Clear blondish straw colour. when refrigerated, the beer will automatically get hazy.

One can notice a lot of (green) apple as does it have some citrus flavouring to it.

This beer can almost lyrically be described as spring in a glass as it gets topped off with some nice hints of hay and freshly cut grass.

This really is a perfect beer to combine with fresh seafood like scallops, oysters or any dish with freshly cooked grey shrimp (crangon crangon) from the North Sea.

It’s also great to drink with a steaming pot of mussels or you can even use some to prepare the mussels in. The blonde Westy goes well with assorted cheeses too, preferably the hard and semi-hard varieties.

The only Westvleteren beer in production that cannot be kept (maximum 1 year). Westvleteren Blond is best drunk as soon as you can lay hands on it as well as at the youngest age possible.

Ageing or holding on to the blond for a special occasion will affect the beer’s fruitiness and hops taste.

The story is the same as with any of the three beers from Westvleteren. It can be a nightmare getting hold of them, but it is possible at the right price.

When checking the availability-page of Sint-Sixtus you will also notice that it isn’t brewed as much as the 12 or the 8. Combined with its limited sustainability it’s even sometimes harder to get hold of than the 12.

We’re sure there are more beer lovers out there that have experienced tasting the 12 than this much sought after blond.

For any further clarification on the subject, ordering details and much more please visit our page on Westvleteren 12, 8 and the brewery. And don’t blame us if you end up having nightmares.

Westvleteren 8
Westvleteren 8 is 12’s little and lesser known brother. It’s sadly also sometimes less appreciated, and is said by some to be the least popular (recognised by its blue bottle cap) of the active varieties made by the Sint-Sixtus ...

Westvleteren 12 (XII)
Westvleteren 12 (XII) - The legendary, close to mythical Trappist from the Sint-Sixtus Abbey of Westvleteren. Global winner of a wide range of titles, prizes and medals, acclaimed by many, desired by the masses. Their first title ...
Facebook
Twitter
Google
Email
Pinterest
GET LATEST BEER NEWS