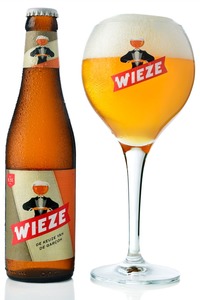 Even in country that is as steeped in beer as Belgium is the Wieze brand is iconic. That’s in part down to the Wieze October festivals, inspired by the famous Munich beer fests, that were held for many years until 1987, winning a legendary reputation.

However, the roots of Wieze beers go back much further in time, more than a century in fact. In 1866 Petrus Josephus Van Roy started brewing on his farm in Wieze.

The eponymous brand was well known for its art deco ‘waiter logo’ designed by graphic designer Raymond Van Doren. After the Van Roy business went bankrupt the beer started on a journey around several breweries before it found a home at De Brabandere, best known for its Bavik pils, Kwaremont, Petrus Tradition and its sour beers.

De Brabandere is putting a lot of support behind this ‘beer recommended by the waiter’. Its Wieze has found an excellent fit within the tradition of strong Belgian blond beers that re-ferment in the bottle. It is a complex, zesty yet quaffable beer with a delicate bitterness and subtle hints of citrus fruits.

Wieze holds a great appeal for lovers of nostalgia and all things retro. If the waiter had the choice, he would still go for a Wieze - do you agree with him?

This beer, with its golden-blonde colour, usually has a clear appearance, but may be slightly cloudy as a consequence of the re-fermentation process.

Sparkling bubble rise in the glass below a covering of white froth.

Wieze is served in an elegant, balloon-shaped glass on a tall stem that allows its aromas to develop to the full.

This quaffable tripel will surprise you with a complex character that combines a delicate, slightly zesty bitterness and touches of citrus.

Wieze is highly recommended alongside mussels, zesty oriental dishes like a curry, or a blue-veined cheese of the Roquefort type.

The recommended storage period is 24 months for bottled beer and 6 months in the barrel.

Always store (upright) in a dark and cool environment.

Brouwerij De Brabandere export their beers around the world and although this beer is one with a local story and heritage there is no doubt you will be able to get your hands on this one wherever you are.

Petrus Dubbel
The strong brown dubbel, a beer style that originated in abbey breweries, has evolved into a generic term. Call ‘Dubbel!’ across a café counter and, without exception, you will be served a quite strong, brown beer in which the mal ...
Facebook
Twitter
Google
Email
Pinterest
GET LATEST BEER NEWS