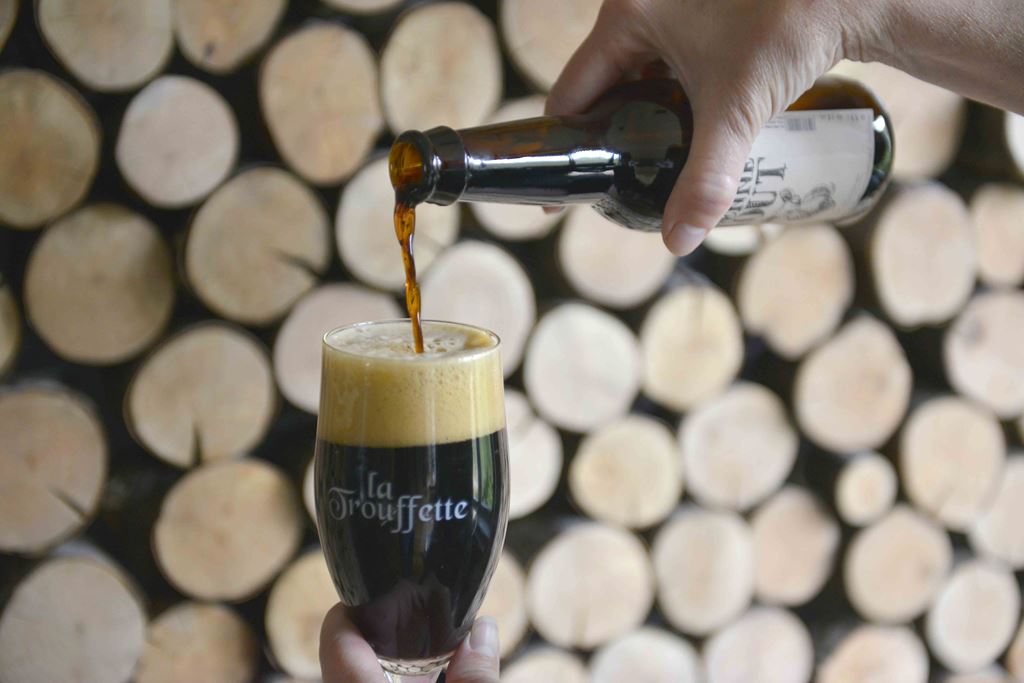 Passion is the starting point for many a brewer’s adventure, and Philippe Minne, engineer by trade, is no exception to the rule. For a dozen years or so, he was a hobby brewer, learning all the technical aspects of brewing. It was a great start for a fledgling professional brewer.

Philippe caught an incurable case of the brewing bug after his many visits to brewers in the area. In search of a location to set up their own brewery, Philippe and his wife Catherine met organic farmer Philippe Meurisse.

Soon, the deal was done and in 2008 the two Philippes established a brewery at a farm near Bastogne, the town which gave them their name.

The brewing equipment came from Brasserie de Rulles. Philippe Minne is the main brewer, assisted by Philippe Meurisse, who also shows the visitors around, Catherine handles admin and sales support.

Brasserie de Bastogne is part of the new wave of Belgian microbreweries.

A sustainable way of doing business and a focus on regional products are paramount for these guys; authenticity oozes from every pore. For example, their Trouffette beers pay homage to the carnival traditions of Bastogne. The label is adorned with a lad riding a boar with a barrel around its neck – he’s a rascal who has much in common with folk hero Tijl Uylenspiegel.

The Bastogne Pale Ale is the Belgian response to the popular IPA (India Pale Ale), although with a less pronounced bitter taste than its American cousins.

At the heart of Brasserie de Bastogne’s philosophy is the aim to produce balanced, artisan beers with character and an uncompromisingly pure taste.

This brewery has further surprises in store. There is an imperial stout, Ardenne Stout, a pure malt beer with aromas of whisky and wood. 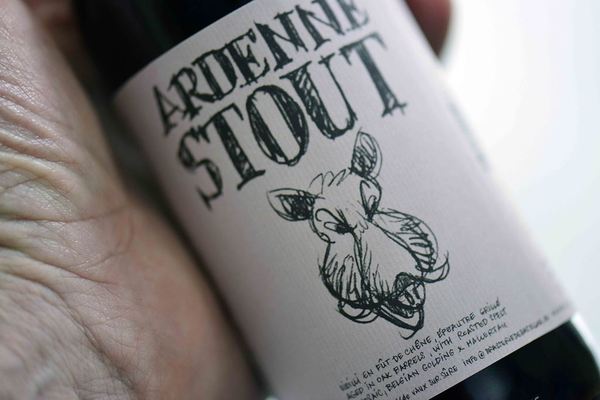 They also produce a saison, re-fermented using wild yeasts from the Brettanomyces family.

Close to half of that is destined for export, mainly to Italy.

The brewery may move to a different location in the Ardennes, as Philippe and Catherine are planning to set up an entirely new brewery closer to their home in Marche-en-Famenne. 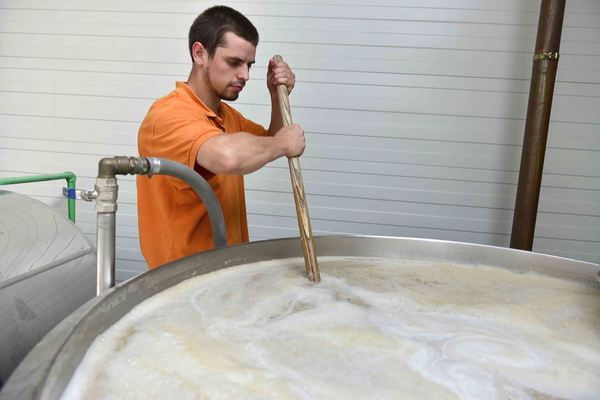 Once an engineer, always an engineer. Philippe Minne wants his brewing to be safe and secure - everything has to be spic and span, with no half measures.

As a hobby brewer, he acquainted himself with all aspects of his chosen trade, conducting experiments with wild hops and taking charge of the malting of the farm-grown barley…

His passion for pure ingredients is evident. Philippe uses 20 varieties of hops and 18 different malts.

He uses hop pellets – instead of hop extracts – and often adds fresh hop cones to his brews.

The yeast is sourced from the Orval brewery, which is also consulted by Philippe when he needs analysis.

Just like the brewers at nearby Brasserie de Rulles, the Bastogne brewery uses open fermentation in stainless steel, covered basins.

The layer of yeast at the top protects the beer from oxygen and harmful bacteria and provides an escape route for the carbon dioxide.

The yeast brings surprisingly fruity aromas of mango and banana to the brewery’s beers. All of the Bastogne beers re-ferment in the bottle, taking around six weeks in total to produce. This is a brewery that doesn’t shy away from a challenge or two.

A recent addition to the range is a saison beer that re-ferments in the bottle after the addition of wild yeasts and takes three months to mature. 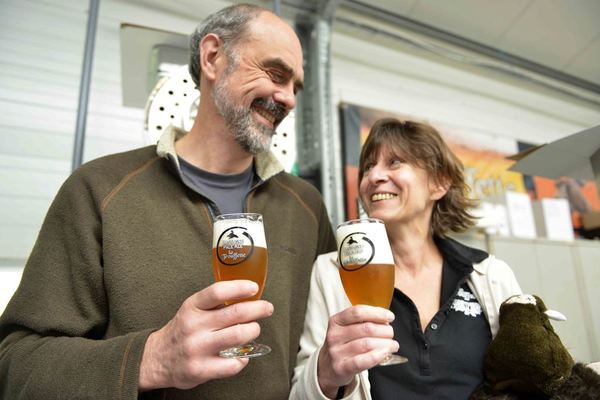 Philippe Minne is the grandson and great-grandson of a brewing family from the village of Val St-Lambert in the Liège region. He became intrigued by the stories of his father, who would regale his family with their ancestral brewing history.

For many years, Philippe paired his steady job as an engineer in a Liège metal factory with hobby brewing.

In 2014 however, Philippe took the audacious step of becoming a full-time brewer.

In the brewery he can rely on his assistant, Marc Cleeremans, who learned the ins and outs of the trade as an apprentice with the Rochefort brewery.

Philippe and Catherine Minne have established themselves as regional micro brewers and have been accepted by the community. They take part in the annual, international Brassigaume beer festival, initially set up by the Brasserie de Rulles.

Catherine rejoices in the current success of the microbreweries in her region as they contribute to a rich local brewing tradition.

Beer lovers now have an alternative to replace the standard taste of industrial beer.

Key virtues for these brewers are character, authenticity and purity.

They try to use locally sourced ingredients whenever possible. When a new beer is launched, it will fit in with the brewer’s own particular taste.

There are no commercial compromises; taste is paramount and business comes second. 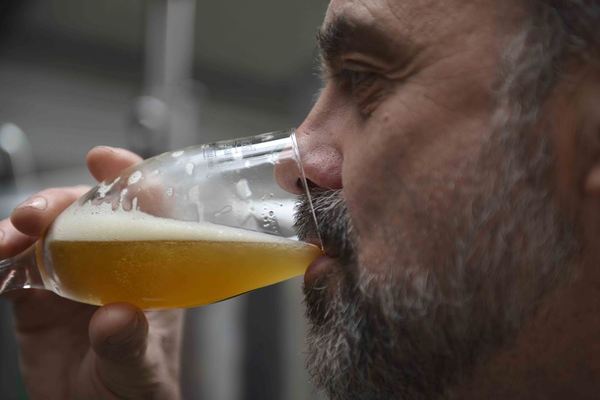 Brasserie de Bastogne sits in a green oasis. The brewery is housed in a fully functioning industrial unit right next to the farm. This is where the brewer meets and greets you before guiding you around the brewery, explaining the production process in full.

In this compact area, you get a quick overview of the brewing process. You discover how the mash is made, the way the wort is heated and filtered before being boiled with the addition of hops, before cooling down once again.

The tour also covers the topics of filtration, storage, bottling and re-fermentation.

Brasserie de Bastogne opens its doors to groups of 15 to 50 people, by appointment only. Contact the brewery directly or book your visit through the Martelange tourist office. A guided visit of the brewery takes about an hour and culminates in a tasting of three or four beers.

A visit to Brasserie de Bastogne makes a perfect combination with a trip to the nearby city of Bastogne, primarily known for the Battle of the Bulge fought at the end of the Second World War. The brand new Bastogne War Museum, right next to the Mardasson Memorial, tells the whole story.

The area is also a hotspot for hiking. The important nature reserve of Forêt de la Haute Sûre et d’Anlier, all 80,000 hectares of it, is just around the corner. 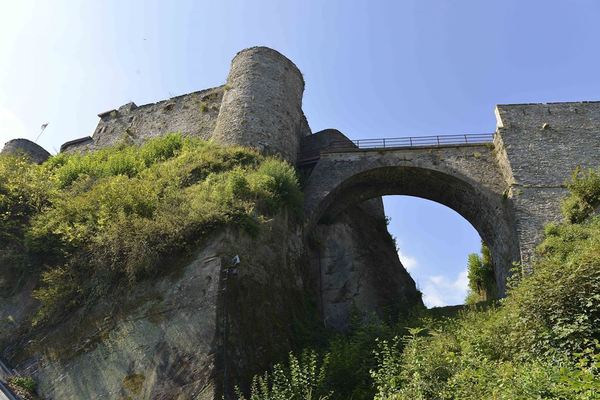 The brewery provides an excellent base to explore the Ardennes and lovers of outdoor activities will rejoice in the many activities on offer. This area is popular with parachute jumpers, hang gliders, rock climbers, kayakers, mountain bikers, horse riders, hikers, fishermen and, in winter, people flock to the area to practice cross-country skiing.

Nearby Saint-Hubert is located on the 160-km Trans Ardennes hiking trail that runs between La Roche and Bouillon.

This trail is divided into seven daily hikes of between 17 and 25 km, with twelve additional loops.

Packages can be arranged, with your baggage driven from one B&B to the next while you walk the path. If your ambition does not extend that far, just follow one of the many signposted, themed walks or venture out with your GPS.

Close to Saint-Hubert is the Fourneau Saint-Michel, an open air museum that focuses on the traditional architecture of the region. In the Iron Museum, next to the Al Pele tavern, a rather primitive blast furnace is on display.

This church also has a crypt in the Romanesque style.

Saint-Hubert is the “European capital of hunting and nature” where, every autumn, a blessing of the hunting dogs takes place.

You can also discover the Roman city of Aarlen (Arlon) with its archaeology museum and medieval centre.

Further south lies the unique Orval Trappist abbey. Here you can visit the ruins of the medieval abbey, the herb garden and the brewery museum.

Vaux-sur-Sûre is 164 km away from Brussels. Take the E411 towards Luxembourg, leaving at exit 27 to take the N85. From Liège, by car, the journey is 104 km on the E25 motorway, leaving at exit 56 to take the N848 and the N85. Belleau, the hamlet that is home to the brewery, is hard to reach using public transport. The train journey from Brussels or Liège to Bastogne takes 3.5 hours.

There is a bus service to Belleau from Bastogne station, but it is only available on application and runs infrequently.

However, once you have reached your destination, all the ingredients for a successful holiday are there.

The tiny town of La Roche, on the banks of the River Ourthe, is guarded by a medieval stronghold. It is famous for its artisan pottery.

The Ourthe region is a hikers’ paradise. Its central attraction is the panorama from Le Rocher de Hérou in Nadrin.

A spectacular trail guides you towards the ‘5 Ourthes’. The Baraque de Fraiture, one of the highest peaks in the Ardennes, is favoured by cross-county skiers in winter and by hikers throughout the year. 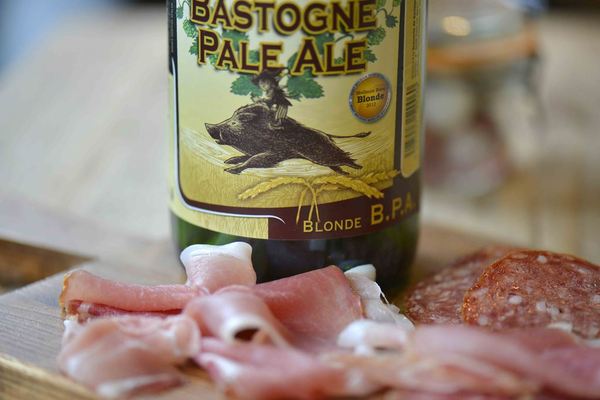 The Ardennes are fragrant with the smell of the forest and wood fires. In the autumn, game features prominently on local menus: venison, deer, wild boar, hare… Ardennes ham is another local delicacy. The hams are salted and allowed to mature for a couple of weeks.

The meat is then rinsed and spends several months in a cooling chamber before drying out for up to eight months at room temperature.

The dried hams are basted with a mixture of lard, olive oil and pepper.

Genuine Ardennes ham is a natural product and its taste can vary depending on the weather conditions when it was made.

Ardennes ham is often smoked on a fire made with beech wood or oak, just like the ubiquitous trout, another regional classic.

Other Ardennes specialties that fly off the shelves include sausages and paté. The window displays in many butcher’s shops tell the tale of the region’s meaty obsessions.

Other discoveries to be made include the ox steak from the nearby Gaume region or the classic, white-blue Belgian beef. Those of a sweet-toothed disposition will drool over the hand-made jam from Durbuy and the artisan Belgian chocolate from tiny workshops in places like Florenville and Habay-la-Neuve.