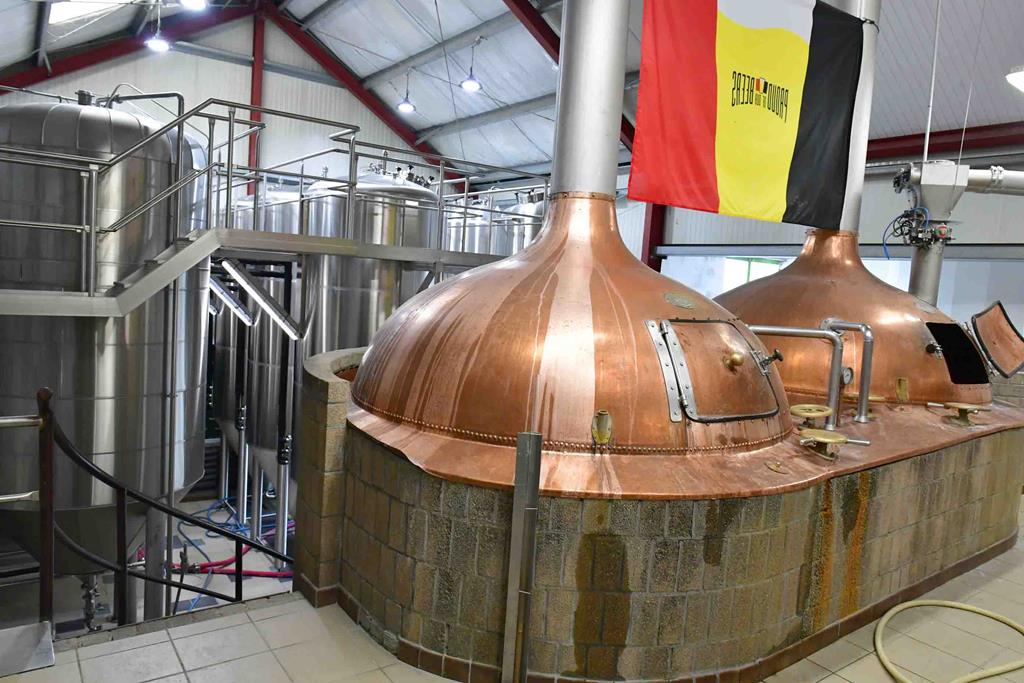 The story of Brasserie de Brunehaut begins in the year 1890, in the village of Guignies, now part of the municipality of Brunehaut. The Saint Joseph village brewery is set up in a farmhouse. Here, abbey beers are brewed, more specifically those from the former Saint-Martin abbey in nearby Doornik (Tournai), based on the original monks’ recipes.

In later years the brewery will be re-named ‘Brasserie Allard et Groetenbril’ after the owners’ family names. This village brewery is to provide the quarry labourers and land workers with beer for dozens of years to come.

The brewery closes its doors in 1989. One year on, the brewing equipment is moved to the current location of Brasserie de Brunehaut, a former roof tile factory located in Rongy.

The then new owners, Guy and Marie-Christine Valschaert, were in charge of the brewery until 2007. The same year sees the current owner, Marc-Antoine De Mees, start up his Brasserie de Brunehaut.

Marc-Antoine, an economist from Brussels, used to be in charge of Meura, a Belgian producer of brewery equipment. He is familiar with the world of Belgian brewing and knows how to run a brewery from a technical point of view. Besides this, he has many years’ experience as a crisis manager under his belt. Undoubtedly, he is the man who will take the accounts of this ailing brewery back into the black.

Marc-Antoine instantly recognises the international potential of the Saint-Martin abbey beers, the brewery’s flagship brand at the time of the take-over, and the Brunehaut beers.

The Brunehaut range is expanded with organic beers, to be followed by a gluten-free range. Both set themselves apart from the traditional abbey beers.

Quality is the name of the game. For example, the beers are crafted using the organic barley grown at the brewery farm next door. This barley is malted according to the brewer’s own specifications. In the meantime he is researching traditional varieties of grain so he can perfect the quality and the taste of his beer range. 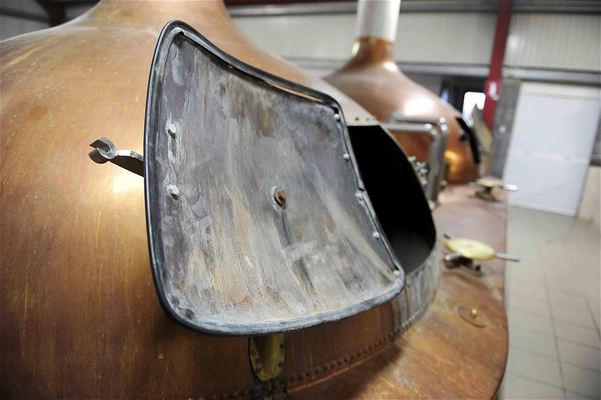 The brewery is now experiencing steady growth. The Saint-Martin and Brunehaut beers are exported to as many as 25 countries, with the USA accounting for three quarters of turnover. Brunehaut has successfully joined the wave of organic and gluten-free beers that ‘still taste like a real beer’.

Saint-Martin, heir to the former Saint-Martin abbey in Doornik, forms part of the tradition of recognised Belgian abbey beers that are produced using herbs. The blonde abbey beer will amaze you with its touches of juniper berries.

The brown will strike you with its liquorice aromas and the Christmas beer packs a punch with its aromas of cloves and cinnamon.

All of these are complex degustation beers that taste full in the mouth and are re-fermented both in the bottle and in the barrel. The organic and gluten-free Brunehaut beers are going back to the very basics: they contain only water, yeast, hops and malt.

These beers are brewed with three different hops as well as a variety of malts. Each brew is produced in a volume of 80 hectolitres which is quite a lot for a Belgian microbrewery. Brunehaut draws its iron-rich water from a well that is 70 metres deep. Part of the iron content is removed from the water before use.

To get the beer to ferment and re-ferment, the brewer predominantly uses dry yeasts as well as the extremely delicate Brunehaut Blonde house yeast.

This has been propagated from a single original cell and is added anew each time.

All of the Brunehaut beers, including the Saint-Martin, are remarkable in that they re-ferment both in the bottle and in the barrel. 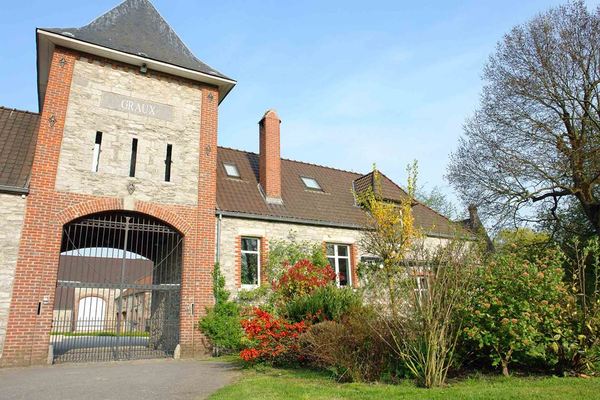 Brasserie de Brunehaut want you to taste a real beer. Main brewer Damien Delnest: “Niche beers like our gluten-free, organic Brunehaut Blonde and Ambrée compel us to work in an artisan way. It is quite a challenge to achieve consistent quality, working with relatively large volumes per brew.

With stronger beers, the alcohol should not be dominant. And we want our beers to be as pure as possible.”

The entire production process takes approximately one month from brewing, up to and including main fermentation, maturation and re-fermentation.

Marc-Antoine De Mees is frequently carrying out tests in collaboration with his team and does not shy away from experimenting. On the one hand, you have the ‘short chain beers’ brewed with organic barley produced by the brewery’s own farm, Domaine de Graux. There are surprising variations on the well-known theme such as the Brunehaut Pomfraiz', an unsweetened fruit beer based on the Brunehaut Blanche white beer, then re-fermented using strawberry and apple juice.

On the other hand, you will find the traditional abbey beers. But then, the brewer will surprise you with a limited edition of 200 bottles of quadrupel that have matured in oak barrels for a total of four months.

“Now and again, our brewers need a challenge,” Marc-Antoine jokes. The common theme linking all these stories? The quest for a pure taste. Marc-Antoine is unlikely to succumb to the latest hype in the beer world. Far from it in fact. His respect for terroir, tradition and the Belgian brewing expertise simply won’t allow it. 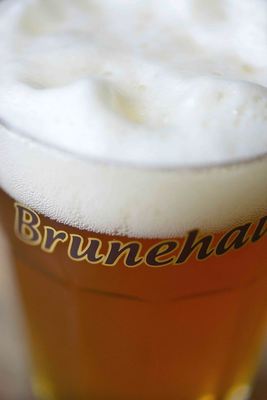 Take a tour of Brasserie de Brunehaut and you will meet its owner, Marc-Antoine De Mees, face-to-face. It is he who narrates the entire story of the brewery, from 1890 to modern times. “I myself want to explain how we work here. After all, our visitors are our best ambassadors,” he states.

You can visit the brewery during the week, but by prior arrangement only.

You will be able to follow the entire production process, from seeing the mash emerge from the mashing basin down to filtration, boiling, adding the hops, maturation, re-fermentation, bottling and the stay in the warm chambers.

Your tour concludes with a tasting of a beer of your choice and you are given some beers to take home with you.

If you are interested in finding out more, you can ask to visit the brewery farm and discover the meaning given to ‘terroir’ in this particular corner of Hainaut.

Domaine de Graux is a beautifully restored, historic farmhouse built in a square shape, with 120 hectares (almost 300 acres) of agricultural land attached. Besides the cultivation of organic barley, you will find tall fruit trees here, of the old-fashioned variety, such as apple, pear, cherry, plum and quince. 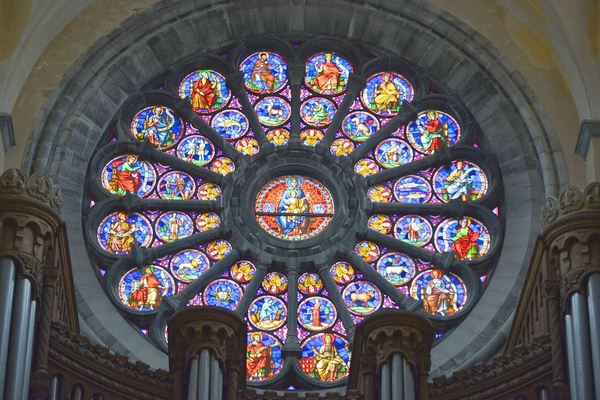 The village of Brunehaut owes its name to the Roman army road that once extended between Amiens and Cologne. The community of Brunehaut comprises of various villages on the banks of the River Scheldt, close to the French border, within a patchwork of marshes, fields, forests, orchards and rose gardens.

Here and there you will come across small castles, sturdy rectangular farm buildings and smallholdings. Brasserie de Brunehaut is located at twelve kilometres from Doornik, one of the most ancient cities in Belgium, marked out by its Roman roots.

Not much is left of the Abbey of Saint-Martin, the origin of the name and recipe of the abbey beers.

There is only the former abbatial palace, currently the site of the town hall, the subterranean crypt and the ‘tithe barn’ where the farmers used to come in order to pay a 10 per cent tax on their harvest.

The 12th century Belfort tower, a Unesco World Heritage site, affords a splendid view of the city. Place Saint-Pierre, where you can admire several neo-classical buildings, is located in the oldest part of the city.

Discover a number of buildings dating back to the 17th and 18th century including the former Soeurs Noires nunnery, the Bishop’s Palace and the Hôtel des Anciens Prêtres. The most eye-catching building is the Cathedral with its five spires, also a Unesco World Heritage Site, built in a number of architectural styles including those from the Roman, Gothic and Renaissance periods.

At Grote Markt you come across the completely renovated Lakenhalle (Linen Hall – 13th century), erected from the hard blue stone that is local to this area. Doornik also offers many samples of the art of bourgeois building in the Romanesque and Art Nouveau styles.

To this day, the Pont des Trous (13th century), a feat of medieval military architecture, links both banks of the Scheldt. Walkers will enjoy a signposted 2-kilometre walk through the ancient, Unesco-preserved, ancient city centre.

Taste the regional beers in one of the typical cafés you will come across, Les Amis Réunis for example, where they are always happy for you to join in with a popular game. 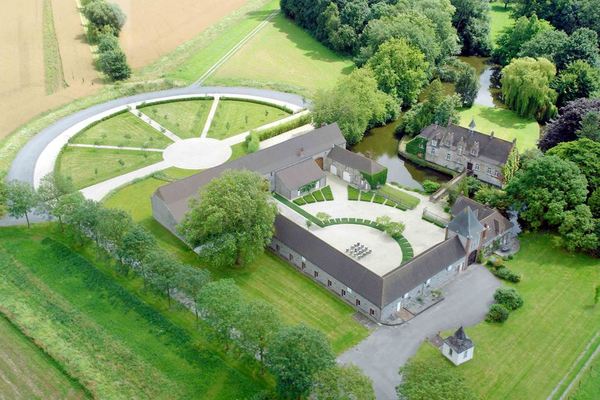 From Brussels, drive to Rongy using the E19 towards Bergen, exit 21, followed by the E429 direction Lille, the A16 and the E42 to Bergen (Mons), exit 31: Antoing. This drive, covering a distance of 110km, will take around one-and-a-half hours.

From Doornik railway station, bus line 98 will take you to Rongy in about 40 minutes. The bus service runs three times daily.

We can recommend the area around the brewery to both hikers and bikers.

There are over 60 signposted walks throughout nature parks, forests and on the banks of the River Scheldt. Or you can use the WandelGPS app.

Cyclists will discover the cycling node network, where, local tourist office map in hand, you just follow the numbers of your chosen route from node to node. This network has now mapped out 1,600 kilometres of cycle tracks.

All tracks are within a rural environment and, especially near the Scheldt, not particularly hilly. 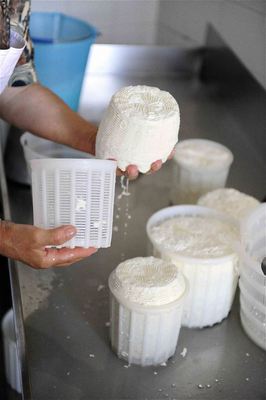 The small farm on the estate is home to a herd of goats managed by local cheese makers. The cheese dairy itself as well as the shop are located just a kilometre down the road. Finally, part of Domaine de Graux is dedicated to hosting seminars and conferences.

In this region, characteristic local produce naturally includes the Brunehaut beers. You will also come across speculaas, chocolate and the Vitelotte Négresse potato variety.

If you have a sweet tooth you will not be disappointed by the Palet de Dame, a round buttery cake covered in apricot jam with icing on top. This delicacy is offered by most bakers in Doornik.

A typical Doornik stew is the ‘lapin à la tournaisienne’: rabbit with prunes and onions, simmered in a sauce of Saint-Martin Blonde. This typical dish would not be complete without a Doornik salad, made with wheat, apples, onions, chicory, pickled red cabbage and green beans.

At the Sel et Poivre restaurant in Hollain they are busy exploring the culinary opportunities offered by the de Brunehaut beers. Main courses include Dover Sole in a sauce of Brunehaut Blanche white beer. Finally, a typical Doornik dish is the ‘mutiau’: finely ground pig’s head blended with shallots, parsley and various herbs, served with a dollop of mustard; accompanied by a beer from the Brunehaut brewery, of course.