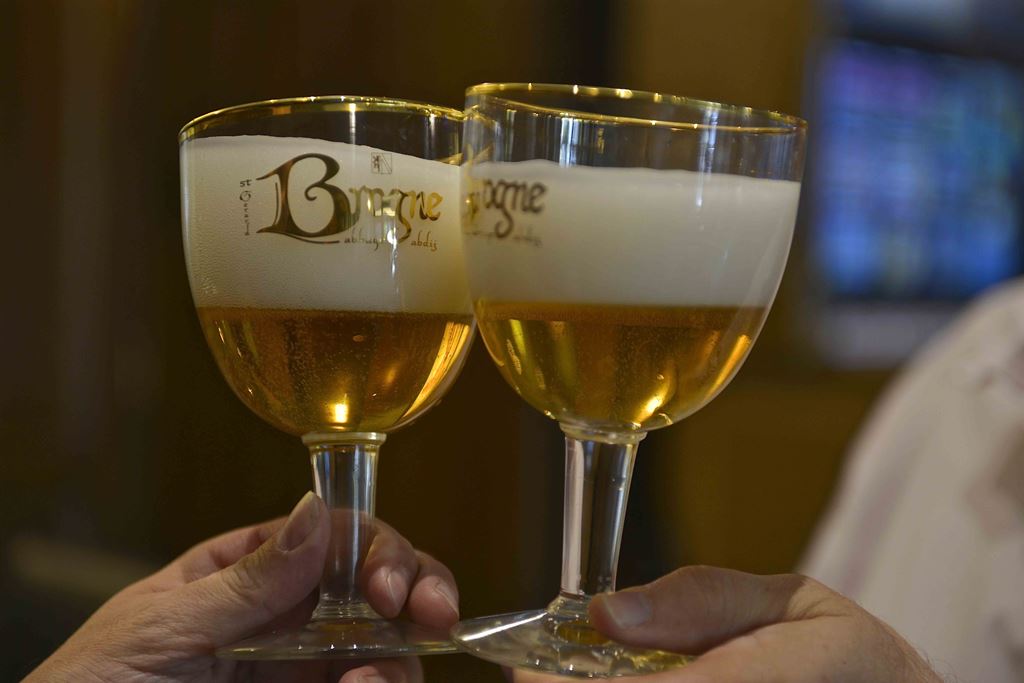 Around the year 880, during a hunt, Saint Peter made an appearance to Gérard de Brogne, a nobleman from the village of Stave, about 20km away from the current site of the abbey. The Saint bestowed upon the knight the task of founding an Abbey on his lands.

Gérard promptly made his way to the Benedictine abbey of Saint-Denis, on the outskirts of the city of Paris, and joined the order returning around 917 carrying a reliquary containing one of the arms of Saint Stephen.

Brogne Abbey, located on the Burnot river and close to two springs, was inaugurated in 919.

The abbey soon became a pilgrimage destination. The spring water was said to have health-giving properties and to be capable of performing all sorts of miracles.

During its history the abbey has been plundered, razed and rebuilt on various occasions.

The last destruction took place at the time of the French Revolution.

The current abbey is built on the remains of four previous ones. The last monks left Brogne in the 1970s and the building has been owned by Mettet council ever since.

In 2013, brewer Bruno Deghorain, known for Brasserie La Binchoise in Binche, together with his business partner Gaby Smet, conceived a plan to set up a microbrewery on the site and brew an abbey beer once again, restarting a tradition that the archives show goes back at Brogne to 986.

They are primarily sold locally and to organic food distributors.

In addition, the brewery exports small volumes to Switzerland, Italy and other countries. 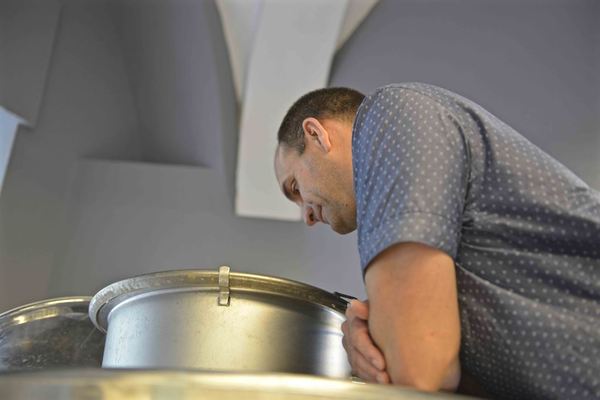 Brogne is one of many abbeys which brewed beer on site. However, the original recipes of the Brogne beers have vanished without a trace. The beers now brewed at Brogne are the first organic abbey beers in Belgium.

The beers from Abbaye de Brogne are relatively light and quite dry for the abbey style.

The blonde is brewed with Strisselspalt, Aramis and Triskel organic hops from the Alsace region, accounting for its delicate bitterness.

The taste of pure malt comes from Munich and pale malts.

To produce the Abbaye de Brogne Brune a caramel malt is added, hence its coffee aromas. Candy sugar is used to set the re-fermentation process into motion.

The beers are fermented using liquid yeast that is recovered from previous brews after which they re-ferment using a separate, dry yeast.

The striking aspects of these beers flavours include fruity esters and phenolic acids from the yeast, which also provides touches of clove and vanilla.

In the brewer’s own words, his beers are, ‘very quaffable but with a full-mouthed taste that is all their own.’

The blonde reminds you of a tripel, but is quite a bit lighter than that style of beer. Brogne produces a brew four times per month. 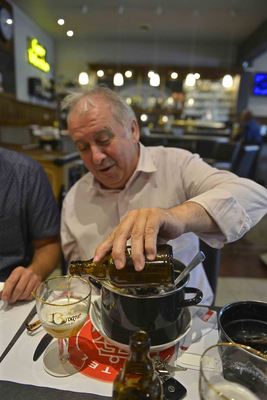 His brewery is located in an ancient former maltings in the shade of Binche city walls.

Bruno is quite partial to historic locations and shares his passion with his business partner, Gaby Smet, whose career includes stints with the commercial departments of AB Inbev and Alken-Maes as well as positions in the hospitality sector and off-licences.

It was through Brogne abbey beer, introduced in 1982 by Brasserie Defosses but later brewed by Affligem and Lefèbvre, that the pair discovered the abbey.

Bruno and Gaby purchased the Abbaye de Brogne brand in 2009 and, following negotiations with Mettet council, they were granted permission to set up a microbrewery in the abbey.

Since then, the pair has also installed a microbrewery in the ruins of the abbey of Villers-la-Ville, where another eponymous abbey beer is flowing out of the tanks. Before long they will set to work at Bonne Espérance Abbey in Binche. Bruno Deghorain likes a challenge.

For example, he produces a limited amount of an Abbeye de Brogne strong amber beer, known as barley wine, that matures in cognac barrels. He is keen to make his own mark rather than launching yet another abbey beer that is hard to tell apart from the others on the market. 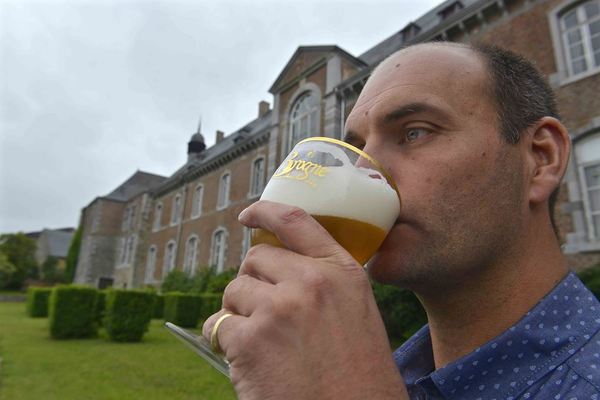 You can visit the abbey and its brewery every first Sunday of the month, or arrange tours by appointment at other times. All visits are free. After a tour of the brewery and a taste of its beers, you can sample the local cuisine in the restaurants in the refectory and the splendid 13th-century crypt under the abbot’s private chapel.

Brogne Abbey used to be entirely self-sufficient. Its gardens provide a view of the former tannery (17th-18th century) and the abbey farm with its splendid pair of towers, now in private hands.

Your eye is caught by the handsome foyer, the majestic staircase, the council chamber and the kitchen with its delicate plaster decoration.

The former dormitories and monks’ cells have been transformed into a hotel that sleeps up to 45 guests.

Brogne Abbey isn’t just about beer, Belgian wine is also celebrated here with a wine museum. The current entrance to the abbey is at the rear, at road level.

The abbey church that was located on the other side of this road has been destroyed, and the well that used to yield its beneficial waters has disappeared below the road. Brogne is nestled in a region that is dotted with abbeys, including those of Maredsous, Maredret and Floreffe. 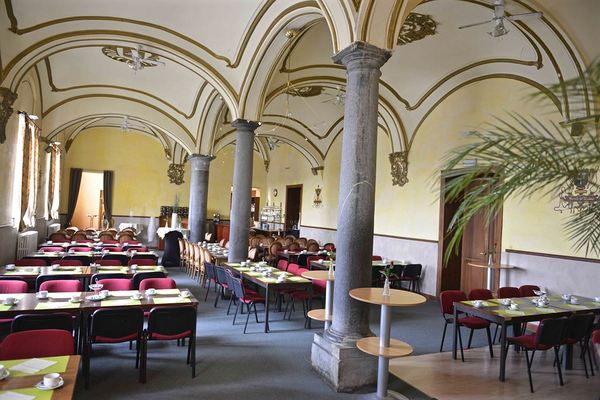 The abbey is located close to the picturesque Molignée Valley. The “railbikes” are a different and fun way to explore the region by pedalling along the tracks of the abandoned railway line between Falaën’s old station and the stop at Maredsous.

The magnificent fortified farmhouse at Falaën is well worth a visit. The ruins Montaigle Castle can be found in their strategic, elevated setting. Traditional pottery is kept alive at Maredsous and Maredret, where traditional stoneware beer mugs are crafted in the abbey workshops.

Those with an interest in beer history don’t have far to travel. Lustin beer museum, with its many examples of Belgian beer history, is close by, as is the Romedenne beer transport museum that offers a unique collection of beer trucks and carts.

This region has much to offer to hikers and cyclists. If you don’t harbour ambitions to be the next great climber, seek out the flat RaVel cycling trails that follow the course of the river Meuse, towpaths and ancient railway tracks. Mountain bikers are spoilt for choice with numerous trails through forests, meadows and fields.

If you prefer to spend your leisure time on the water, hire a kayak to explore the river Lesse. The descent down to its convergence with the Meuse in Anseremme is a classic. And if you prefer rock climbing, the area offers many challenging climbs, particularly on the cliffs of Freyr sur Meuse. 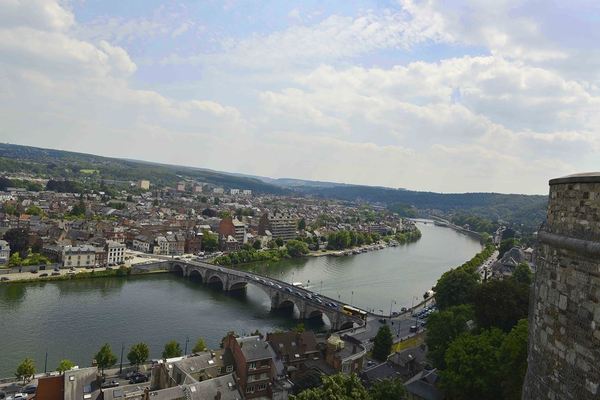 From Brussels, travelling by car, the abbey is a 75-minute drive. Take the E411 towards Namur (Namen) followed by the E42 to Mons (Bergen), leave at exit 12 to take the N4 towards Floreffe. By public transport, take the train to Namur, followed by bus 64 to Biesme. The bus trip takes around 45 minutes.

The abbey lies close to the Valley of the Meuse, an area that attracts many tourists and provides plenty for them to see and do.

Admire Namur’s historic city centre, the museum dedicated to the artist and printmaker Félicien Rops, the Groesbeek-de-Croix museum that takes you back to the 18th century and, last but not least, the city’s cathedral.

The climb up the steps of the citadel is rewarded with a splendid panorama of the city and the river Meuse. In the City of Dinant you can stroll along the banks of the Meuse.

Explore the splendid cave of La Merveilleuse and admire the river valley on a boat trip towards Givet or Namur.

Not far away you will find the medieval towns of Poilvache, Bouvignes and Montaigle, Freÿr Castle – often called Versailles-on-the-Meuse – as well as the castles of Crupet and Vêves. Don’t forget to pay a visit to the exceptional 18th-century Annevoie water gardens with their splendid fountains. 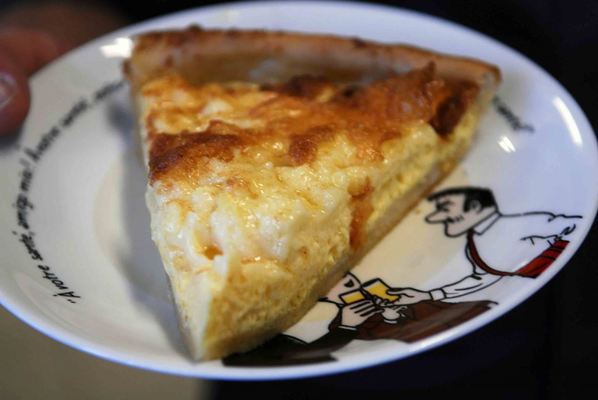 The valley of the river Meuse has always been a fertile, agricultural area whose citizens enjoy the fine-living Burgundian lifestyle. The neighbouring small town of Ciney is where the Belgian Blue originates, a breed of cattle famous for its low-fat beef with a delicate taste.

Wépion strawberries are cultivated in open fields, benefiting from the chalky soil.

In late spring these are sold from roadside stalls.

Gourmets tuck into the very best quality snails, or escargots, which in this region go by the name of ‘petits gris de Namur’.

They have all been gathered locally. A specialty of Dinant is the rock-hard couque de Dinant. If you want to keep all of your teeth, we recommend you soak this biscuit in your mouth for a while before chewing.

Another insider favourite is the local flamiche quiche, made from the Boulette de Romedenne cheese with a generous addition of real farm butter and eggs.

The dairy farmers of the valley of the Molignée have plenty of cheeses to offer, including the semi-hard Molignard, the soft Falaën, the low-fat Boulette de Chertin and a range of goat’s cheeses that include the Tomme de Chèvre.

Going back to where we started, the owners of the abbey have discovered the culinary properties of abbey beers. Their Abbaye de Brogne beers are now used to prepare dishes such as meat balls, bread, mussels and cheese.