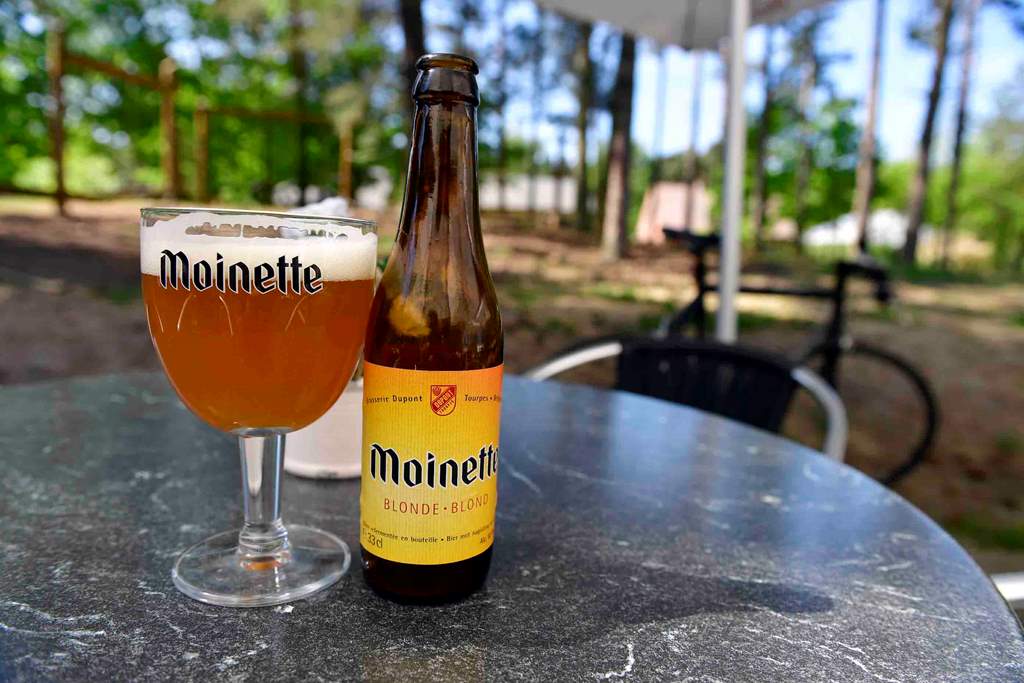 The Beginning – In 1920 Louis Dupont, an agricultural engineer, was planning to buy a farm in Canada when his father Alfred put a stop to his dreams of emigration by purchasing the Rimaux-Deridder farm/brewery (founded 1759) in Tourpes for him instead.

The brewing kept the workforce busy during the quiet winter months, and, after maturing in wooden barrels, the beers kept them happy at their work in the fields in the summer.

Dupont has been brewing them since 1844, but the tradition of this seasonal beer, or saison, harks back all the way to the 17th century.

Sylva took over management of the brewery in 1964. He was a true visionary. Working with Roger Lanneau he pioneered a new generation of bottling equipment that reduced beer oxidation - a real breakthrough. The Dupont brewery did follow fashion to launch its own pils but, has largely stayed true to top-fermented beers and in particular, the Saison.

Under the leadership of Sylva’s sons Claude and Marc the brewery continued to grow.

Marc’s cousin, brewing engineer Olivier Dedeycker, officially joined the brewery in 1990. In 2002 he, with nine relatives, took over the company, with Marc Rosier remaining active until 2012. Nowadays Olivier is the only family member taking an active part in the management of the brewery. Under his leadership, the brewery has undergone a thorough face-lift with the addition of a new brewhall, warehouses, warm rooms and a brewery shop.

For a long time, the Dupont Brewery was a regional brewery selling its products locally.

But by 1986 production had reached 400,000 litres per annum, and over the last 20 years or so, the brewery has become a global reference for saison.

In the 1980s this traditional Hainault beer style was in decline, but the recent, renewed interest in speciality beers saw the saison style make a come-back.

Dupont has been exporting since 1992. In 2015 they should produce 2 million litres of beer, 40% of which is destined for export to countries such as the USA, Japan, Canada, Italy, the Netherlands, France, Denmark and Great Britain.

The Dupont Brewery keeps growing, investing in logistics as they do, while remaining true to traditional brewing processes. Recent additions to the range include Bons Voeux, an heir to Dupont’s Christmas beers and Moinette, a stronger version of the traditional saison style. 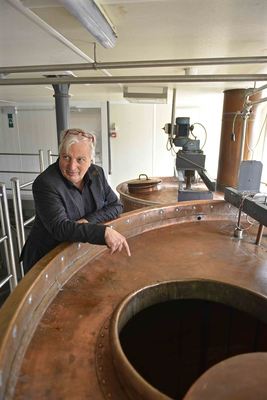 The brewhall is an astonishing combination of the old and the new. Beside the stainless steel basins used for mashing and filtration, two vintage copper boiling kettles, dating back to 1920, are still in use, heated on the naked flame of a gas burner.

The mashing basin is filled with finely ground barley malt and hard water pumped up from a well. The mash is heated to 72°C, converting the starches into sugars.

The liquid wort then flows into that boiling kettle over the gas flame, which heats some of the mixture to a temperature of over 110°C, leading the sugars to caramelise slightly.

Hops are added during the one-and-a-half hour boiling stage, before the wort is poured into the centrifuge to cool down ready to ferment.

At Dupont’s they use traditional rectangular yeast basins with a flat bottom. To set the fermentation process in motion, a unique house yeast will convert the sugars in the wort into alcohol and carbon dioxide. 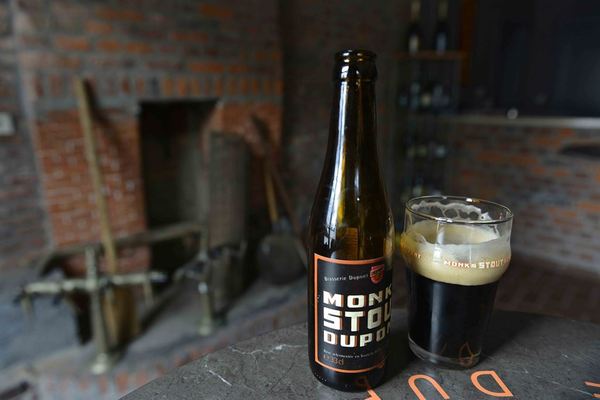 After around five days the process is halted by cooling down the mixture, ensuring that the beer contains some residual sugars.

The chilled beer will now mature in a storage tank for one to two weeks, sometimes even longer.

The yeast that remains in the fermentation tank will be used for the next brew, giving the yeast an active life of around two years.

Once matured, the beer goes back into the centrifuge before being pumped into the lagering tank.

Before bottling, the brewer checks the sugar content and, if necessary, adds liquid sugars as well as new yeast that will start the in-bottle fermentation. Most beers will spend a minimum of six weeks out of an average production time of eight weeks fermenting in the warm room. 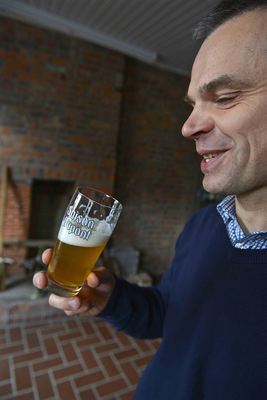 Olivier Dedeycker is the fourth scion of this brewing dynasty to take the helm at Dupont, a brewery with real living heritage. Olivier adheres to tradition and to Dupont’s local roots. This is a brewery that would rather brew a small amount of a high-quality beer than thousands of litres of a poor one. And they have never been slaves to the latest fashions.

The characteristic taste of the Dupont beers is preserved by continuing to heat the kettle over an open flame, producing a slightly caramelised wort that contributes to the beers’ complex character.

And you’ll always get a taste of hop bitter from these dry, well-fermented beers. Another Dupont characteristic is unfiltered beers; only a centrifuge is used to make sure the aroma and taste are spot-on.

All Dupont beers undergo a re-fermentation process. In search of ever greater quality, Brasserie Dupont has even commissioned a unique piece of bottling machinery, installed in the warm rooms, capable of placing large bottles horizontally into crates to enhance the taste.

Olivier was infected by the brewing virus at a very young age. Through the years he has had personal experience of every job in the brewery. This uncompromising dedication has earned him a lot of respect in the beer world. 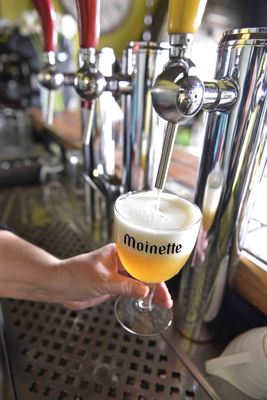 Tourpes has all the charm of a Belgian country village. The silence around the brewery is so complete that you could hear a pin drop. The Rue de la Brasserie used to be the main road through the village, but is now completely enclosed by a brewery that has undergone a complete transformation in recent years.

Tours are held on the first Saturday of each month, led by guides who speak English, French and Dutch. Visitors get an overview of the entire production process.

The tour starts in the brewhall with its vintage copper kettles right next to the brand new equipment, the old and the new hand in hand.

You will see the boiling kettle over the naked flame of a gas burner – a traditional technique that gives Dupont beers their special taste.

The tour covers the brewing process, the centrifuge, fermentation, lagering, bottling (with special equipment that places the bottles into the crates lying down ready to ferment in the warm rooms), and storage.

At the end of the tour, several tastings await, and there is the opportunity to purchase beer from the brewery shop. The Dupont brewery also has its own cheese dairy. Reservations are not necessary for individuals, but groups should contact the brewery before visiting. 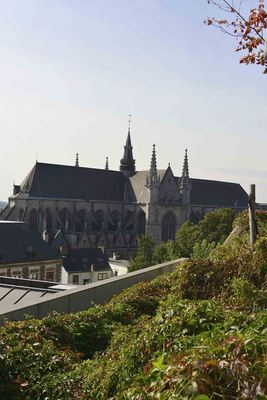 There is plenty to see and do in this part of Hainaut. The ‘Giant city’ of Ath honours its own Goliath at the annual Ducasse parade in August. Visit Mons to admire its historic city centre with the Grand Marché, the eclectic Town Hall and the BAM Modern Art museum just around the corner.

Other must-sees include the clock tower and the Church of St. Waltrude with its authentic Car d’Or carriage that is used to display the relics of the Holy Waltrude every year at the Ducasse procession.

On the outskirts of the city you will discover former mines now playing home to a contemporary art museum called MAC’S in Le Grand Hornu, and the PASS museum dedicated to science.

Tournai is one of Belgium’s oldest cities. Its shining glory is the Romanesque cathedral with its five spires, now a UNESCO World Heritage site.

The historic city centre will keep you busy with its City Hall, housed in the former Abbots’ Palace, the Musée de la Tapisserie (the Tapestry Museum with its collection of local wall hangings), and the Musée Royal d’Armes et d’Histoire Militaire (a military museum).

And the province of Hainaut has much more to offer. There is the authentic medieval hospital of Notre Dame de la Rose in Lessines, the Pairi Daiza animal park in Brugelette, majestic Beloeil Castle, the Church of St-Géry built in a Romanesque style.

The archaeological site at Aubechies gives a vivid picture of the pre-historic and Gallo-Roman eras. Here, you can also taste the house beer, Cervisia brewed by Dupont. 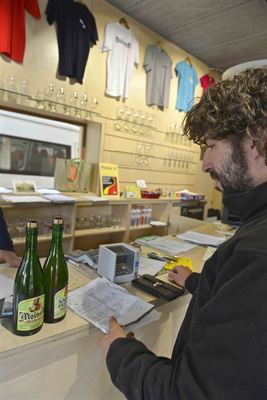 Tourpes is in the municipality of Leuze-en-Hainaut and is centrally located within a triangle formed by Ath, Tournai (Doornik) and Mons (Bergen). It is 74km from Brussels.

By car from Brussels, it is an hour’s drive. Take the E411 road to Charleroi, followed by the E429 signposted for Lille and Mons. Take exit 30 towards Ath, then the N7 to Leuze.

From Brussels, the train journey to Leuze takes one hour. Bus 86A will take you to Tourpes.

The quiet, green area around the brewery is a cyclist’s paradise. For those without a GPS, we recommend the 30-km cycle track from Tournai to Templeuve.

The flat RaVel 1, from West Celles to Tournai to Antoing (35.7 km) follows the course of the River Scheldt for quite a while. It is highly recommended for its many beautiful views. There is always the cycling node network to plan your route.

There is plenty to see and do in the area surrounding the brewery. The village of Tourpes offers a number of splendid historic farmhouses, the Cense de l’Avocat and the Cense du Chic for example. 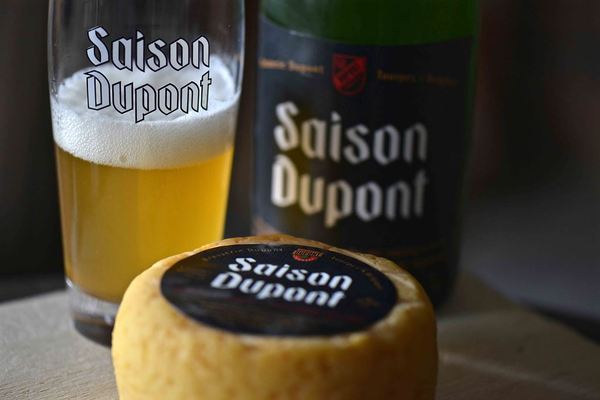 Dupont produces beautiful cheese as well as fine beer, and the Dupont cheese maker has plenty of local inspiration. There are two Moinettes, both hard cheeses, one young and one mature. Carré à la Moinette is a cheese with a soft, rinsed crust.

Several cheeses are made from curds containing beer, hops or malt, and the Saison Dupont cheese bears the name of this brewery’s most famous beer.

The dairy also produces beer cheeses for the Dubuisson and Cantillon breweries. The village of Tourpes is surrounded by rich agricultural land, and you don’t have to look far to find high-quality grains, vegetables or fruits.

Here you will see the famous Belgian Blue cattle grazing quietly. They are known for their lean meat. If you order a steak in a local restaurant, chances are that it will come from one of these famous double-muscled bovines.

Hainaut has a rich folklore that’s still very much alive. The annual Ducasse parade in Ath heralds the baking of the Gouyasse 'tarte à maste'.

This cake is baked in honour of Goliath (Gouyasse), the local giant hero, and contains a type of dry bread called mastellen as well as almonds and raisins.

The most typical dish of Mons is a rabbit and prune casserole; great with beer by the way.

In Tournai they are fond of ballons tournaisiens, liquorice sweets, or Belgian waffles with a generous filling of brown sugar.