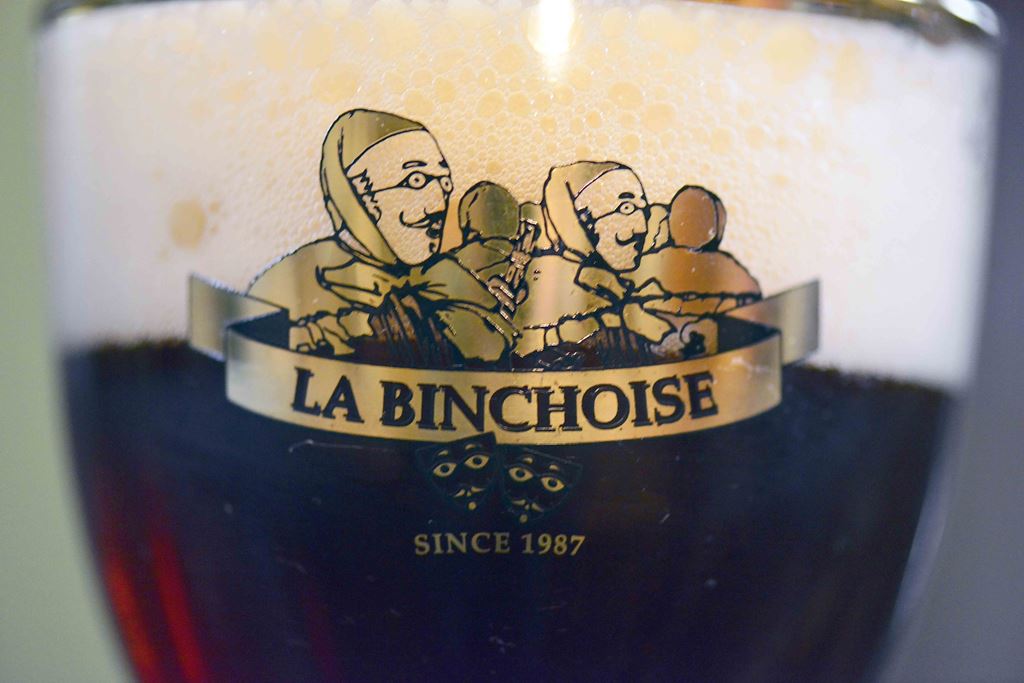 In the year 1836 the Pourbaix family established a brewery with in-house maltings attached at the foot of the impressive and very well preserved medieval walls surrounding the city of Binche.

In 1871 it was acquired by Jules Paternotte who came from the nearby village of Buvrinnes.

His brewery closed its doors in 1929 and the Binche city authorities took over the building.

A man called Oscar Roulez then constructed a malt works opposite the old brewery.

When the city ordered the demolition of all the buildings adjoining the walls, the maltings moved into the empty brewery building.

The maltings closed its doors in 1960 and the buildings were used as warehouses for almost 30 years.

In 1989 André Graux fired up the brewing kettle once again, developing and launching two beers, Fakir and Réserve Marie de Hongrie. Fakir was André’s own nickname. Marie de Hongrie (Mary of Hungary) was a reference to the former Governor of the Netherlands, the sister of the Emperor Charles V who liked to spend time in her Binche palace.

In 1990 brewer Bruno Deghorain started as an apprentice at the brewery. He became a full employee in 1997 and took ownership of the brewery in 2001 with his business partners Christophe Wanty, Gabriël Smet and Jean Fadel.

La Binchoise, a city beer introduced in 1995, is based on an old light blond beer brewed by the local Meunier brewery in the 1960s.

Binchoise has reached iconic status in its home city and is happily downed by the Gilles (masked carnival revellers, to be chosen as a Gilles is a great honour) in celebration of the world-famous carnival.

The traditional beers produced by La Binchoise are selling well in their home region and are starting to conquer the export market, France in particular. The brewery’s production has now reached around 750,000 litres per year. 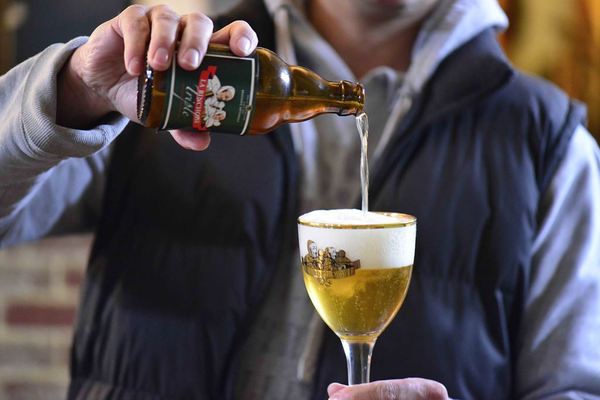 La Binchoise focuses on producing beers with a pure taste. The beer is the star, marketing comes second. Wherever possible, the beers are brewed with local ingredients such as Belgian hops and malt.

All the beers are given plenty of time to ferment and will only be sent to sale after a production time of at least six weeks.

They are brewed with the tap water provided by the city, which is quite rich in calcium.

The proprietary yeast used by La Binchoise is fairly neutral. It provides a large quantity of phenolic acid at temperatures between 27 and 28°C.

This acid produces flavours in beer that are often described as ‘smokey’ or ‘spicy’, sometimes ‘medicinal’.

This yeast also flocculates beautifully, clumping and falling to the bottom of the liquid, and so clears the beer in a natural way.

The recipe for La Binchoise Blonde was inspired by the blond Fakir, developed by André Graux all those years ago, although the new beer is stronger. The use of coriander and orange peel lends it an aroma and taste not dissimilar to a white beer.

At the start of 2008 the brewer introduced an extraordinary new beer. La Binchoise XO, matured in recycled Armagnac barrels, confuses the taste buds.

This strong beer with its complex blend of beer and fruit flavours from the Armagnac, is the odd one out within the brewery’s range.

The idea came to fruition with the production of a barrel-aged beer, matured in recycled Armagnac barrels from the Landes region in France. Classic fermentation in a horizontal barrel is followed by cold storage and light dry hopping with fresh hops. Subsequently the beer spends a long, a very long time indeed, maturing in the barrel. XO is fermented with a proprietary yeast.

The result: a beer that retains its character but is permeated with the full aromas and rich flavour of the distillate. It is highly recommended with roast venison, deer in a chasseur or pepper sauce, for example. 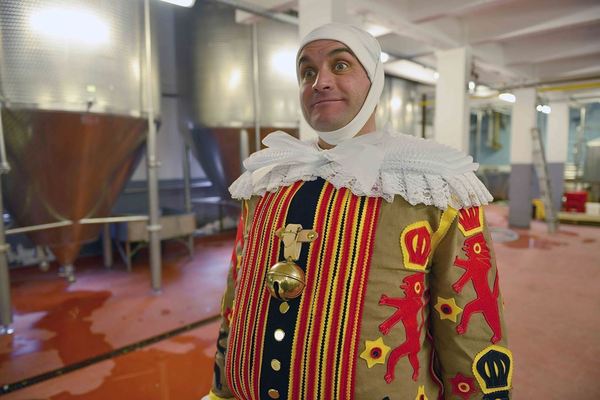 Brewer Bruno Deghorain is a busy bee. Several new microbreweries revolve around him: Abbaye de Brogne, Villers-la-Ville, and soon also Bonne Espérance in the Binche area as well as Brasserie Scassènes (the former Brasserie d’Ecaussines) that used to be known for its Ultra beers and is now marketing the revamped 1830 range.

Bruno is a chemist with in-depth knowledge of the brewing world.

He was infected by the brewing virus during a visit to the pils brewery Brassico in Ghlin back in 1989.

His grandfather was a farmer and Bruno has inherited his passion for nature and for agricultural produce.

To Bruno, brewing is the art of transforming agricultural produce with the aid of science.

At the tender age of twelve he started brewing cider using baker’s yeast.

During his time at university Bruno was to meet future colleagues including Pierre Delcoigne of Brasserie des Légendes and Grégory Verhelst of Brasserie de Rulles. These two Belgian microbrewers happen – or perhaps it’s no coincidence – to be brewers with a real heart for their product and terroir.

However, at La Binchoise, Bruno is also focused on preserving small parcels of industrial heritage on a very human scale: the brewery buildings’ aesthetics appeal to him as well. 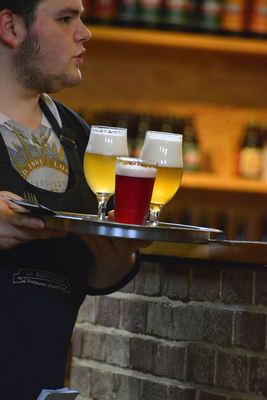 Brasserie La Binchoise is housed in historic maltings at the foot of the Binche city walls. The brewery tour is an induction into the secrets of the brewing process.

from the milling of the malt and the production of the mash, through to the boiling and the addition of the hops, filtration, cooling down, fermentation, cold storage, bottling and finally, the re-fermentation in the bottle.

The visit includes a tasting, both before and after the tour, in the cosy brewery tavern decorated in a vintage industrial theme.

The tavern is located amidst the concrete malt silos and, on its walls, displays vintage enamel beer advertising signs.

So, out and about in the area, what is there to see and do? If you are interested in industrial archaeology, make your way to the site of an old coal mine at Bois-du-Luc (La Louvière).

Another unique destination is the UNESCO-listed hydraulic boat lift on the Centre Canal (Canal du Centre). Take a leisurely walk along the canal and observe the difference in height that is bridged by the boat lift.

But time hasn’t stood still here. Not far away you will find the modern boat lift of Strépy-Thieu (a vertical distance of 117 m) as well as the Ronquières Inclined Plane on the Brussels-Charleroi Canal.

Fancy a trip to a larger city? We can recommend Bergen (Mons), with its belfry, the Church of Saint-Waltrude, the Grand-Marché and BAM, the Museum of Contemporary Art.

On the edge of this very compact city you will find the impressive former mining sites of Le Grand Hornu, now hosting the MAC Museum of Contemporary Art, and PASS that has been converted into a science park. 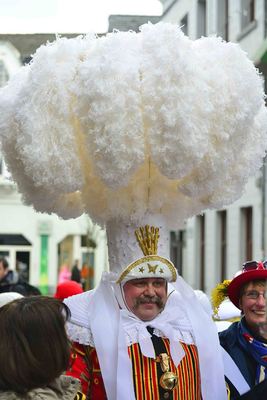 The Binche Carnival has been awarded UNESCO World Heritage status. This most famous carnival in Belgium defies categorisation. Its origins are unclear.

It is thought there may be a link with the Incas from Peru as the carnival costumes are so exotic.

If you want to find out more, the Binche carnival museum is the place to go.

This little city has carnival fever for three full days, culminating on Shrove Tuesday (Mardi Gras) when the masked Gilles make their appearance, dressed up to the nines.

Each will be wearing a linen suit with embroidered badges depicting lions, crowns and other insignia.

The suit is stuffed with straw to form a hump on the back and is topped off by a large white collar.

They often wear a mask underneath a white hood, topped off by an imposingly tall hat made with ostrich feathers.

Around their waists the Gilles wear a belt adorned with six to nine bells, called the apertintaille. They stamp their clogs in time with the entrancing rhythm of the tambourine, welcoming the springtime and chasing away the evil spirits with the noise of their bells and throwing oranges into the crowd as well.

The spectacle starts off with a dressing ritual at the home of every single Gille. Everyone is met individually and performs some dance steps in return.

From four o’clock in the morning, the carnival clubs make their way to their local caff, or stamcafé.

This trickle soon turns into a parade and all day long the clogs reverberate on the cobblestones, following the rhythm of the tambourine and the clamour of the bells.

Binche is attached to its carnival to such an extent that the cobbles in the streets will never be covered in tarmac that would dampen down the sound of the festival. 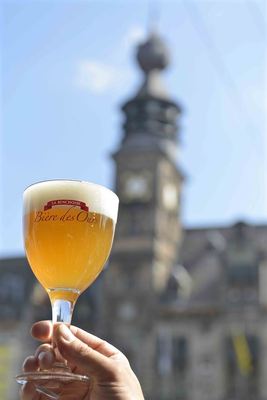 Binche is an hour’s drive from Brussels. Take the E19 towards Paris, leave at exit 21 for the N55. From Bergen (Mons) it only takes half-an-hour to reach Binche by car. From Brussels, by train, the trip takes one hour and twenty minutes.

This little city will amaze you with its unique surrounding walls (2.5 km in circumference and comprising 22 towers) – the only medieval city wall in Belgium that has remained virtually intact.

A tour of the walls reveals three centuries of military building craft. Some of the towers are open to the public.

At the southern point of the fortifications a park, open to the public, was established on the site of the former Binche castles.

In this area you will find the Collegiate Church of Sint-Ursmarus, built in a mixture of styles: Romanesque, Hainaut Gothic and Renaissance.

The former St. Augustine’s College is now home to the International Carnival and Mask Museum where you can find out more about the rich international carnival tradition and the way masks were used.

The 16th-century City Hall is constructed in the late Gothic style but has three surviving Gothic arcades from the 14th-15th century which are reminiscent of the former Meat Hall, long since disappeared. The belfry with its clock tower is now a UNESCO World Heritage site. 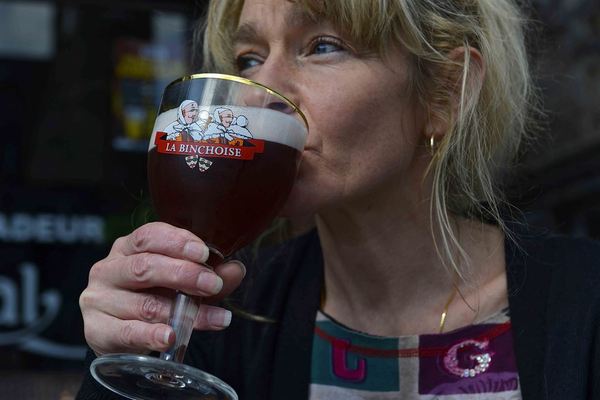 For Belgian chocolate, look no further than the artisan chocolatier Geoffroy Fauconnier.

As a Binchois born and bred, he has caught the carnival bug.

While you sample his pralines and truffles enquire after his oranges de Gilles and the moulded chocolate inspired by the famous mask.

His oranges pay homage to the oranges that the Gilles throw into the crowd at the Mardi Gras parade. If your taste veers towards the savoury, the double de Binche, a buckwheat pancake covered in zesty Herve cheese, will go down a treat.

The brewer suggests asparagus prepared in the Flemish way with clarified butter and a mimosa of hard-boiled egg, fresh parsley and a mousseline of potato.