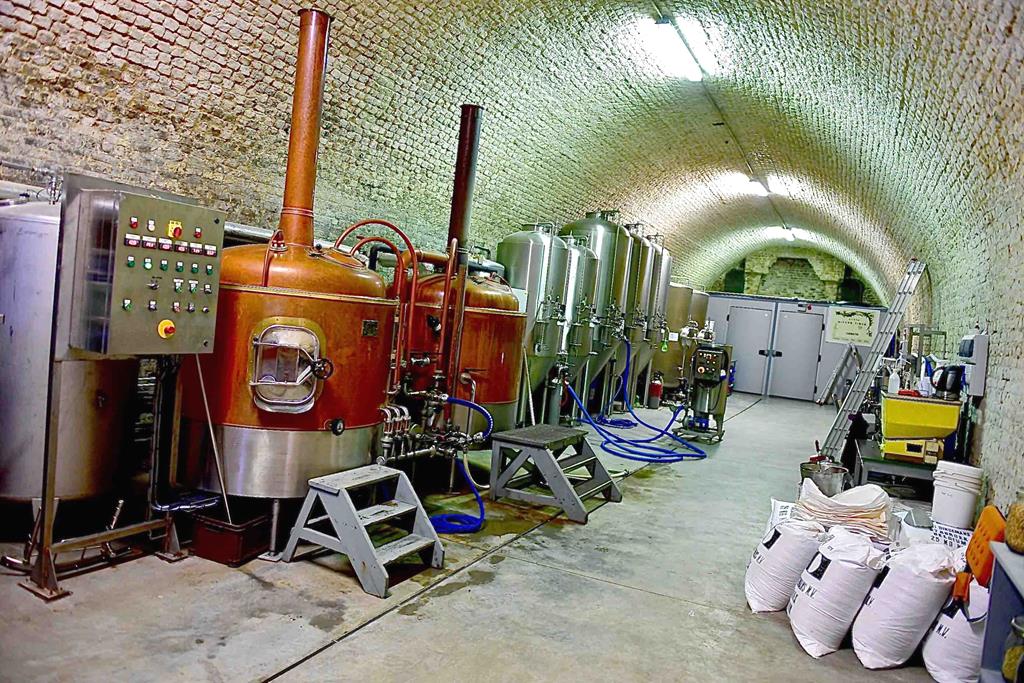 The Beginning – De Kazematten, the city brewery of Ypres, was launched in 2013 when two brewers joined together to turn their dreams into reality: Hans Depypere, the owner of the Sint-Bernardus brewery, and Rudy Ghequire, manager and brewmaster at Rodenbach’s. The microbrewery they founded is now managed by Julie, Hans’s daughter, and Rudy’s son, Maarten.

Brouwerij De Kazematten lives up to its name thanks to its unique location: the Ypres casemates or kazematten, fortified defensive positions that form an indelible part of the history of this 17th-century city with its thick enclosing walls.

Vauban, a renowned engineer who constructed fortifications for Louis XIV of France, built these particular casemates at Houten Paard in 1680.

Over the years these vaulted chambers have been used to store ammunition and other army supplies. With their gun emplacements, they stand out from the other souterrains or underground chambers around the city.

The casemates have also provided a home, of sorts, to the soldiers who have defended the city through its history. During the First World War – during which the city of Ypres was all but reduced to rubble - the British army established an officer’s mess in the kazematten alongside a command post, a field hospital, and a space where the weary soldiers could take a break from fighting.

These bolt holes were also the printing works for the famous soldiers’ newspaper The Wipers Times. This tiny but important publication provided the instant inspiration for the name of the brewery’s first blond beer.

Ypres’ newest brewery now also produces the beer formerly known as Grottenbier (literally “cave beer”) under its new name, Grotten Santé. The beer was previously brewed by the Sint-Bernardus brewery and matured in the marlstone caves near Kanne. 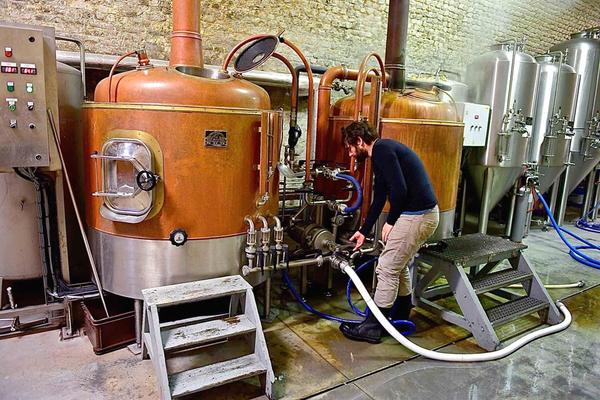 As soon as you walk in to De Kazematten you notice how small and compact the brewhall is, squeezed into a tunnel at the back of the thick fortified walls. Here you’ll find brewer Koen Hugelier going about his work in a very traditional fashion.

First of all, he treats the city’s tap water to make it suitable for brewing. A mash composed of water plus ground, malted and roughened grains is heated step-by-step until the starch is released and converted into fermentable sugars.

This process takes around one-and-a-half hours. The liquid wort is then filtered for three hours before cooling down in a plate cooler.

Hops and herbs are added to the sweet wort before the mixture is boiled for another 90 minutes.

Then the cooled wort is left to ferment and a yeast, suited to top-fermented beers, is added to the mix.

The main fermentation takes about a week. The beer is then transferred to a cold-storage area to mature for four weeks before it is bottled or transferred to barrels. Both The Wipers Times 14 and Grotten Santé spend some time in a warm room where they re-ferment in the bottle. 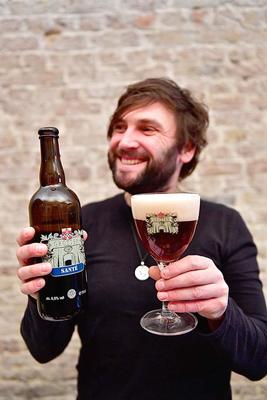 Brouwerij De Kazematten is the brainchild of Hans Depypere, the owner of the Sint-Bernardus brewery in Watou, to the west of Ypres, and Rudy Ghequire, site manager at Rodenbach’s in Roeselare, to the city’s north-east.

They have left nothing to chance in founding their microbrewery. Hans’s daughter Julie looks after management and administration, while Rudy’s son Maarten, a qualified bio-engineer, is in charge of production.

One of the team’s first moves was to appoint Koen Hugelier as head brewer.

Koen is a lab technician, qualified in medicine and pharmacy, and is also a trained zythologist.

He succumbed to the beer virus many years ago and is still in its grip. As if all of these achievements are not enough, Koen also teaches about beer and food pairing.

Koen knows his industry. He has already turned his knowledge into practice with his own range of seven beers, inspired by the Seven Deadly sins and brewed by Gulden Spoor.

He has mastered several very different beer styles: his chocolate beer and IPA give testimony to his manifold skills. 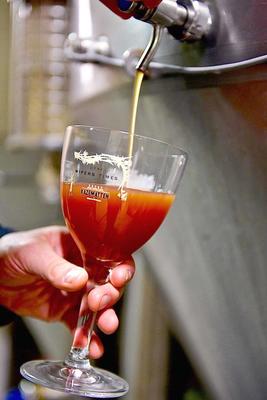 The brewery welcomes visitors every Saturday from 3pm to 5pm. Booking in advance is recommended. At De Kazematten brewery you can witness the entire brewing process in just one room. For any home brewers this is an ideal opportunity to learn through observation. The beers are bottled at and shipped from the Sint-Bernardus brewery in Watou.

Only 100 metres away from the Menin Gate in Ypres, behind the church of Sint-Jacob (St. James’s Church), you will find the Kazematten visitor centre. Here, five large, fully renovated rooms maintain their original architecture while being perfectly adapted for modern use.

A stylish, modern brasserie managed on behalf of the Sint-Bernardus brewery, provides plenty of opportunity to enjoy the beers made by De Kazematten and Sint-Bernardus. An exhibition touches on the Ten Centuries of Fortifications in Ypres, or Tien Eeuwen Ieperse Vestingen.

Here you can discover city’s rich – and bloody - past through first-hand accounts from historical witnesses. The exhibition also highlights the splendid wild life that has developed around the defensive walls. There is a signposted 2.6-km vestingroute path that takes you around the city’s defences. You can also find out more about the historic heritage of Ypres on the erfgoedwandelroute trail (5.3 km). 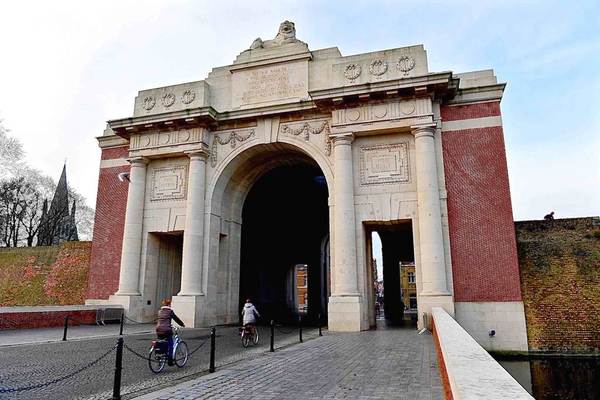 Trade flourished in Ypres in mediaeval times. Together with Bruges and Ghent, it was one of Flanders’ great linen production centres. The impressive Lakenhalle, or Cloth Hall, testifies to this glorious past.

The In Flanders Fields Museum housed in the Cloth Hall brings the history of WWI to life through personal statements and modern media.

From October 1914 to October 1918, the hotly contested frontline of the “war to end all war” was only a few kilometres from the city centre.

Five major battles were fought in the Ieperboog, also known as the Ypres Salient – a bulge in the front line. You can now explore this historic area by bike.

The signposted Ieperboog – Ypres Salient cycle trail (36 km) starts and finishes at Ypres’ central market square. You can join the trail at three other locations and on the way you will encounter cemeteries, battlefield sites, and monuments of the Great War. 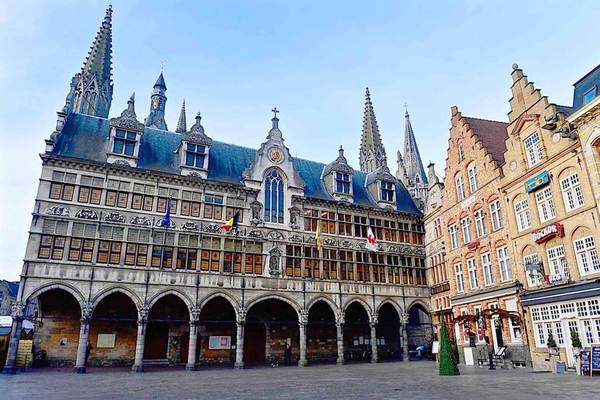 By car from Brussels the trip to Ypres takes around 90 minutes. Take the E17 towards Ghent and Kortrijk (Courtrai), followed by the A19 towards Ypres and the N37 to Ieper-Centrum (Ypres-Centre).

From Brussels by train allow two hours for your journey to Ypres. You may have to change trains at Ghent Sint-Pieters. From Ypres railway station, Bus 95 will take you to Rijselpoort (Lille Gate), not far from the brewery, within 10 minutes.

The streets, squares and gates of Ypres are steeped in history. Its Cathedral was reconstructed in the Gothic style and contains the graves of Jansenius, Bishop of Ypres and Robrecht (Robert) of Bethune, Count of Flanders.

You will also find a fine side altar with a beautiful retable (an altar backing) and the statue of Our Lady of Thuyne that is said to perform miracles. There is a live church-bell carillon concert, performed by the city carillonneur, every Saturday afternoon.

And the terrible impact of the First World War is still very tangible after all these years. Visit the Anglican Saint-George’s Memorial Church, and the Menin Gate, engraved with the names of 54,896 soldiers missing in action.

The wider region is home to around 75 Commonwealth war cemeteries. Tyne Cot in Passendaele (Zonnebeke) is the largest amongst them. The Ypres Salient driving route (70 km) takes you past the best-known war sites. You can also make use of an extensive cycle-path network – mapped by “nodes” - to explore the Westhoek by bike. 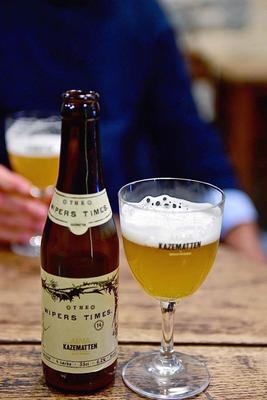 The locals of Ypres talk greedily about their meaty tapjesvleesch, kattenklauw (cat’s claw) cakes, endives grown in the cold ground, the butter from Diksmuide, blauwe patatten (blue potatoes) and their parsnips, an almost forgotten vegetable. And how could we forget about eel and herbs, as paling in ’t groen?

Tapjesvleesch – a joint of veal or pork - is placed in a stande to preserve it. This stande was just a stone or wood basin, filled with brine. After pickling, the meat was placed in another basin filled with water to draw out the salt. This gives the meat its pink colour.

It is then larded with bacon - tapjes in the local dialect. This delicately larded meat is now served as a stew, resting on a bed of diced vegetables and covered with a creamy sauce.

Paling in ’t groen or eel in a green sauce, is a classic regional dish thanks to a couple of nearby ponds: both the Zillebeke and Dikkebus are within easy reach of the city. This eel dish is made with sorrel, spinach, chervil, mint, tarragon, chives, lemon balm, shallots, egg yolk and cream.

Kattenklauw, literally meaning cat’s claw, is made with puff pastry, candy sugar, apples and raisins and filled with cream.

Of course, beer lovers will find much to their liking in the Westhoek area with its famous hop fields that are particularly prolific around Poperinge. Hop shoots are another local speciality, taking pride of place on restaurant menus in early spring. Enjoy them fresh from the fields, unless you’d prefer to wait for a hop paté!