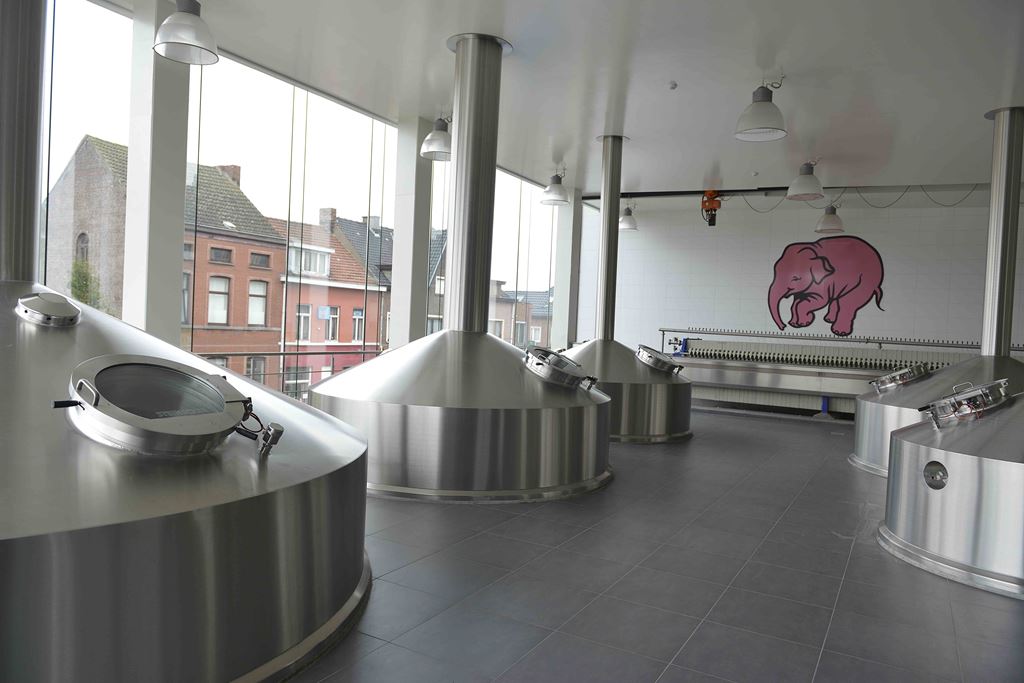 The beginning – There is documentary evidence dating brewing at the 'Appelhoek', in Melle near Ghent, back to 1654. In 1902, Leon Huyghe, from Poperinge, started work at the brewery, which still stands on the same site today.

Leon was married to a brewer’s daughter from Wolvertem, Delfina van Doorselaer. Four years later, he purchased the brewery, at the time called Brouwerij-Mouterij 'Den Appel' (The Apple).

Malt production ceased in 1913 and during the First World War the Germans requisitioned the brewing kettles to get their hands on the copper they were made of. But as soon as the war finished, the kettles were replaced.

By 1925, Leon’s son, Albert Huyghe, and son-in-law, Louis Droesbeque, had joined the company.

Three years later, a concrete construction replaces the old brewery buildings, and in 1939 an entirely new brewery is producing the beer. There is a name change too, from Brouwerij 'Den Appel' to Brouwerij Leon Huyghe. Golden Kenia, a premium pils, is introduced in 1945 and by the 1960s; the brewery was taking advantage of the demand for beers of the German ‘Dort’ type by launching their 'Eigerbrau' into a steadily growing range.

Jean De Laet, who is married to Albert’s daughter Any Huyghe, joined the brewery in the early 1980s. The company underwent a face lift and, over a period of 10 years, large investments were made.

The small-scale pils brewer turned itself into a modern brewery producing top-fermented beers. However, exports were yet to have much importance.

In 1985, Artevelde amber beer was launched. A brand new range of green peppermint beers called Minty was destined for France.

The Huyghe brewery soon started to market its first beers with in-bottle re-fermentation. Their range continued to expand with the addition of the dark Artevelde Grand Cru, Cuvée de Namur and La Poilluchette. Soon, 30 per cent of production was destined for export markets. The legendary blond Delirium Tremens first saw the light of day in 1988, with the “pink elephant” soon on the way to world domination. 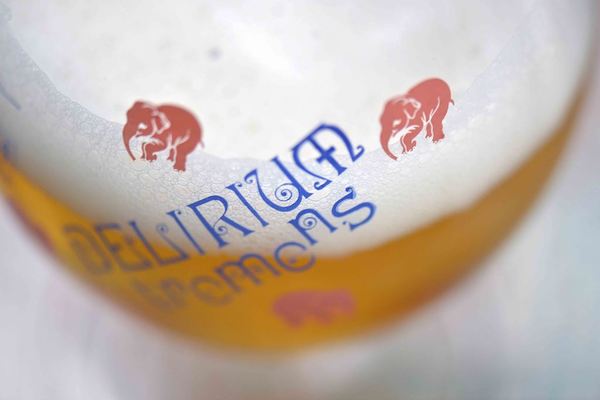 The bicentenary of the French Revolution was marked with the introduction of the golden blonde amber beer La Guillotine.

In 1992 the fourth generation took up its seat in the boardroom as Jean’s son, Alain De Laet, took the reins. It was a time of more investment and growth. Within five years production had doubled and exports accounted for more than 50% of turnover.

The brewery once again added to its range with table beers, Campus speciality beers, and the Aarschotse Bruine and the Sint-Idesbald abbey beers.

There were more new products: the six Floris fruit beers, all based on white beer, and the Floris white beer itself. The brewery’s production went to well over 10,000,000 litres-a-year. In 2012 a new brewing hall was inaugurated, pushing capacity to 35,000,000 litres and in 2013, the new blonde Averbode abbey beer completed the Huyghe range. For now. 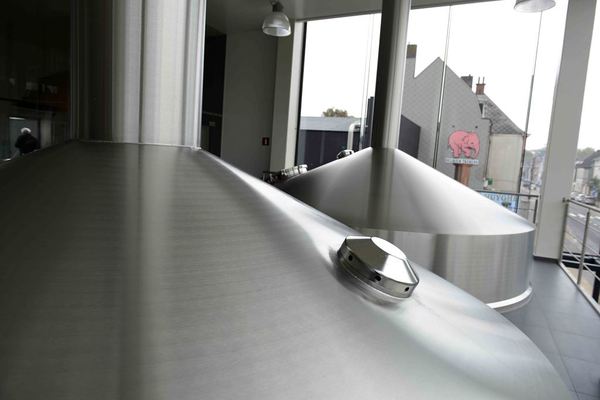 “Our engineers are able to use pretty much anything for their brews,” says Alain De Laet. “They brew fair trade beers (Mongozo with quinoa, banana, mango, coconut), but will also turn their hand to chocolate beer, orange-coloured pils or heavier beers that re-ferment in the bottle.”

Brewing so many beers is no easy task. Planning ahead, in particular, brings its challenges. However, it’s all in a day’s work for head brewer, Patrick De Waele, and his team.

The brewery uses five different yeasts for the main fermentation stage and a further three to promote re-fermentation.

When it comes to Delirium Tremens, the brewers use a particular home-cultivated yeast that is only used in the main fermentation of this special beer.

It’s this yeast that provides the fruity aromas of green apple with a trace of banana that are characteristic of this popular blonde.

Pils malt accounts for the pale colour, and aroma hops give a pleasant and somewhat dry-bitter taste. The water used at Huyghe’s comes from a well with a depth of 41 metres. This water is quite hard so it undergoes an iron-removal process and is also partly de-calcified to make it suitable for use in brewing.

The brewery’s other flagship brand is La Guillotine, a well-hopped amber beer with striking aromas of citrus thanks to dry hopping with American Cascade hops. One for the connoisseurs.

The latest shining star on the Huyghe firmament is the Averbode abbey beer.

This recently introduced brew deliberately sets itself apart from existing abbey beers with a hoppy character that is derived from the Challenger and Saaz hop cones used in a dry hopping process. This particular recipe was developed by the Huyghe brewery itself. 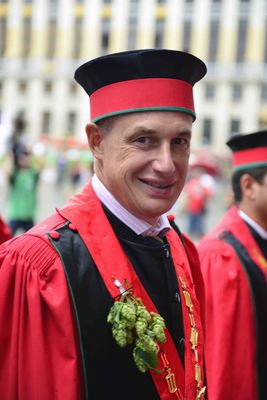 Alain De Laet has been in charge of the brewery since 2005. His father Jean De Laet now oversees the expansion of the international network of Delirium Cafés. These focus on speciality beers and provide a superb, world-wide testing facility for the brewery’s own products.

“We have set ourselves apart from the crowd,” Alain De Laet says. “Using the slogan “u vraagt, wij brouwen” (“you ask, we brew it”), we have been building our reputation since the 1980s and 1990s.”

The brewery’s phenomenal growth stems from those decades. In 1986, its annual production amounted to 1,300,000 litres. Huyghe was then a village brewery producing that Golden Kenia pils, table beer and lemonade for the local market only.

In 2014, production reached 17,500,000 l. Exports now account for 80 per cent of turnover, but demand in Belgium is increasing all the time too. In recent years the brewery has been focusing on its flagship brands: Delirium, La Guillotine and Averbode.

“We now produce 23 mother beers; up to 6 brews of 15,000 l every single day,” Alain De Let explains. “For example, all of our fruit beers have a white beer as their mother brew.” In other words: the brewer’s skill is in playing variations on a familiar theme. 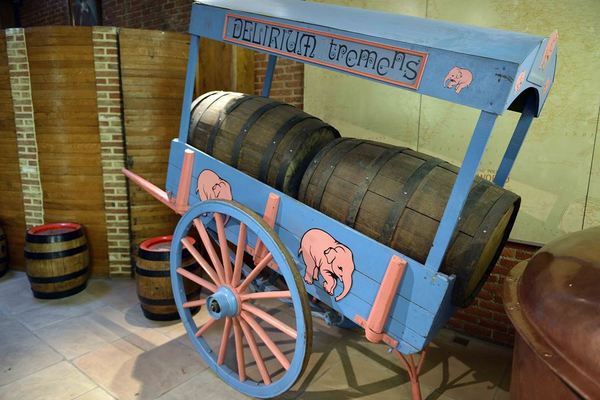 A visit to the Huyghe Brewery is a journey through time. The company video tells the story of a village brewery that grew into a formidable player on the international scene. Visit the old brewing hall (built in 1938 and no longer in use).

The new brewing hall (completed in 2012) is where Huyghe’s future lies. It oozes optimum performance and attention to quality.

Your visit will show you the entire brewing process in detail: filtration, fermentation, maturation, bottling, the barrel line and storage. To top off the experience, visitors are invited to taste the beers, on tap or in bottles. In the degustation room they can feast their eyes on the exhibits of this living museum while the head on their beer settles. The walls are festooned with ancient beer adverts; cabinets display vintage beer jugs and glasses.

One wall has been entirely taken over by a fresco depicting brewing scenes from the Middle Ages. Pink elephants wander around everywhere.

For those who want to continue their alcoholic haze outside the brewery, we recommend the Delirium-themed Café in Getrouwheidsgang in Brussels, close to Korte Beenhouwersstraat.

This is also the site of the Jeanneke Pis statue – a modern sister to the shameless Manneken-pis. Every year, members of the Brotherhood of the Pink Elephant, an association of Delirium Tremens fans, come to pay homage to her. 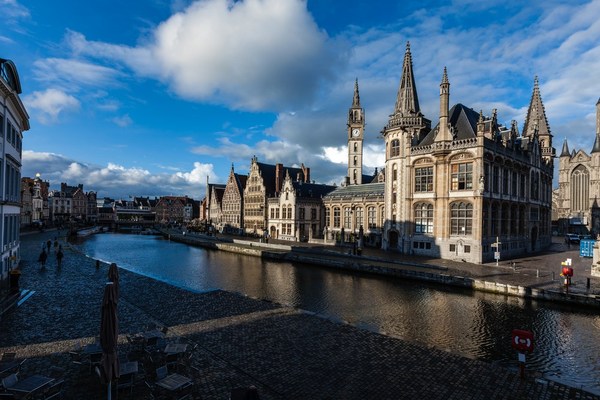 A brewery visit is a perfect opportunity to enjoy a sightseeing trip around Ghent too. Take plenty of time to view what this city, ranked among the most authentic historic cities in the world, has to offer. As in Bruges, there is water everywhere, and Ghent is perfect for a boat trip.

The lights come on in the evening, lending a beautifully romantic atmosphere to the historic city centre. Cars are banned from most parts of the city, which is tailor-made for walking and cycling.

The view of the medieval skyline, best seen from the Sint Michielsbrug (St Michael’s Bridge) will take your breath away. The Church of Saint Nicholas (Sint-Niklaas), the gothic Belfort tower and the Saint Bavo Cathedral (Sint-Baaf) are stars of this panorama.

The latter has become famous the world over as the home of the iconic triptych by the Van Eyck brothers: the Adoration of the Mystic Lamb.

In medieval times, Ghent harbour was located on Graslei and Korenlei. Today, the area is a heaven for those who like to shop, eat and drink in style. Explore the medieval Patershol quarter around Gravensteen castle and visit this impressive building before continuing your journey towards the nearby beguinage.

Culture lovers will simply love this city. Here, they can choose from 'the Huis van Alijn Museum', a 20th century culture collection incorporating its own puppet theatre.

Also worth a visit: the Design Museum; the Museum of Fine Arts with its collections of Belgian art; and the SMAK Museum of contemporary art.

The STAM City Museum, found at the historic Bijlokesite, explains the origins of Ghent tells the city’s story. If you are planning to visit during the summer, please bear in mind that the 'Gentse Feesten' festival is held during the third week in July.

The city will be overrun with visitors wanting to attend the largest open air festival in Europe. 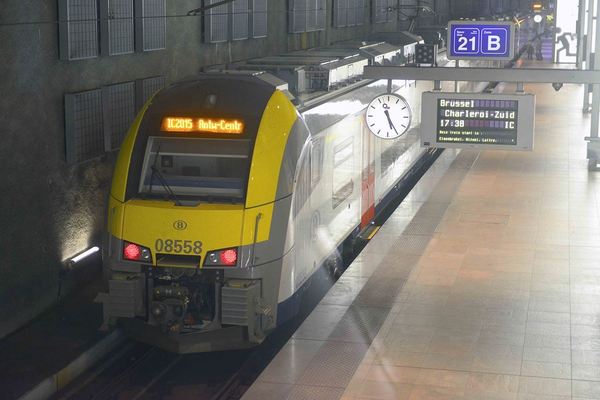 Without a doubt Melle’s main attraction is the splendid Sint-Maartenskerk (Church of Saint Martin), with an organ by the renowned Van Peteghem, a protected monument, and the Stations of the Cross.

Several handsome castles can be found in the vicinity of the Huyghe brewery. The round trip by bicycle from Melle to Ghent follows the course of the river Scheldt is 28km long in total.

The 'Rechtvaardige Rechtersroute' (48 km) cycle route lets you follow the traces of the panels of the famous triptych, The Adoration of the Mystic Lamb, that were stolen in 1934 (one was never returned). From Ghent you make your way by bike to Wetteren via Laarne and discover where the - alleged - art thief used to live and – perhaps – hid his loot.

Walkers can discover the valley of the Upper Scheldt and the Scheldemeersen nature reserve using the 'Slag bij Gavereroute' (7 km) footpath, named after the tragic battle that took place here in 1453. Finally, the river Scheldt can be seen in all her splendour from the 'Doornhammekeroute' (5.6 km) path in and around Zevergem. 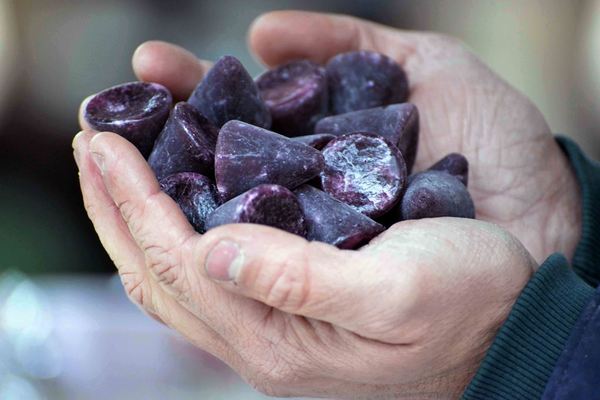 Ghent is synonymous with 'Gentse waterzooi', a broth made with chicken or fish, vegetables, cream and potatoes. Legend has it that the Emperor Charles V, born in Ghent in 1500, was very keen on it.

Other Ghent specialties include the zesty 'Gentse mosterd' (mustard) from Tierenteyn, a retro store with plenty of nostalgia; dry salted ham; red and blue veined cheeses and small unpasteurised goat’s cheeses, all of which take their part in the food landscape of this city.

Those with a sweet tooth can look forward to Gentse kriekspekken; the melt-in-the-mouth cuberdon (or neuzekes) sweets made with raspberry syrup and gum Arabic; the wafer-thin 'Gentse kletskoppen' biscuits and makrons baked with roast almonds.

'Gentse mokken' are buttery biscuits with a strong flavour of aniseed. 'Mastellen' are soft, round brioches with a hole in the middle.

Gourmets are very well served by the food on offer in this city. Aside from gastronomic venues, Ghent offers a wide range of cosy eetcafés, brasseries and bistros where you can get a drink and a bite to eat. This University City has hordes of students, so it is easy to find a budget-friendly place to fill your stomach.

Last but not least, there’s plenty here for vegetarians. Even if you don’t eat meat, Ghent will never leave you hungry. 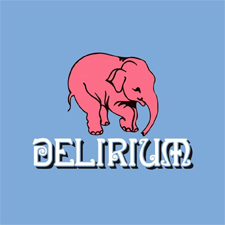