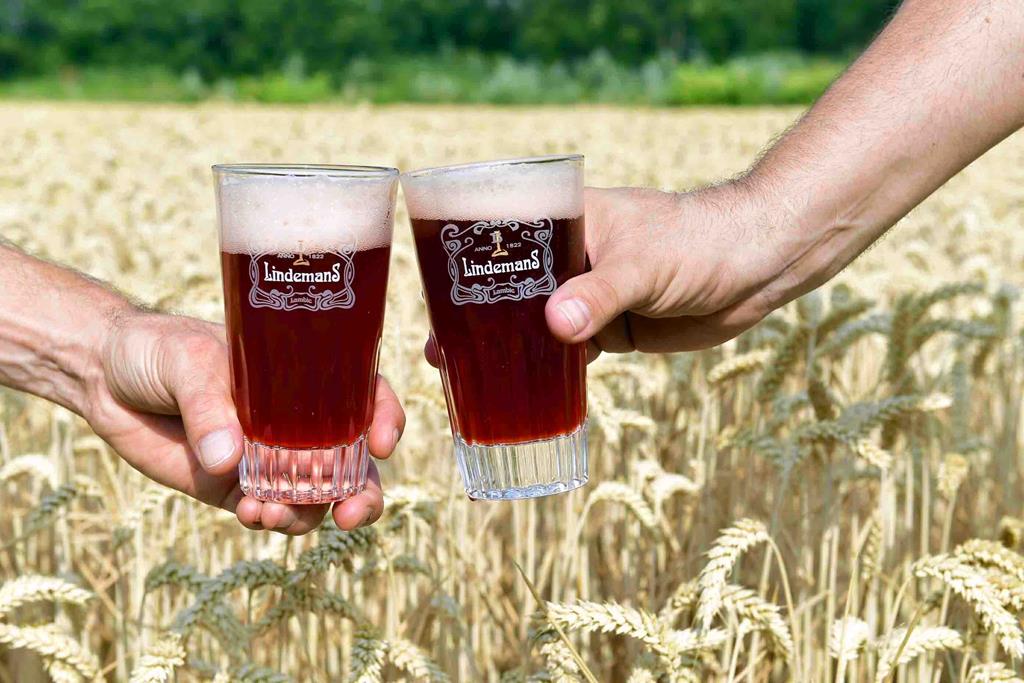 In 1822 Joos Frans Lindemans married a desirable farmer’s daughter called Françoise Josine Vandersmissen. And so the Lindemans family came to own a farm called, Hof ter Kwade Wegen. There was farming blood in Joos Frans’ veins, but his sights were set somewhat higher.

He was soon mayor of the small town of Vlezenbeek (close to Brussels) and in the evening, after ploughing his lands, Joos Frans took to brewing lambic (lambiek) beer.

During the winter months work would come to a standstill on his 75 hectares of farmland and meadows, and the farm hands, male and female, would be employed in the brewery.

What started off as a side activity gradually developed into the main business.

Several generations later, by the 1950s, brewing was the sole activity at Hof ter Kwade Wegen.

The know-how of making lambic beers had been passed from father to son.

In 1970 the brewery started shipping its beers outside Belgium. Its first export market was France. Only 10 years later, as much as 70 percent of its production was shipped abroad, mainly to the USA, France, Switzerland and Germany.

A sixth generation took over in 2006: cousins Dirk and Geert. They instigated an impressive investment programme that included a sizeable expansion of the maturation and fermentation chambers for their lambic.

Today the brewery is well placed to respond to increased demand from abroad. Lindemans is currently capable of producing 17,000,000 litres-a-year.

At some point the brewery stopped producing its fond gueuze, as all its lambic was being used to make the fruit beers that were so popular abroad. Export had become the main activity.

Lindemans Oude Gueuze Cuvée René has been produced since the late fifties, at the request of its American importer the name Cuvée René was launched in 1994. 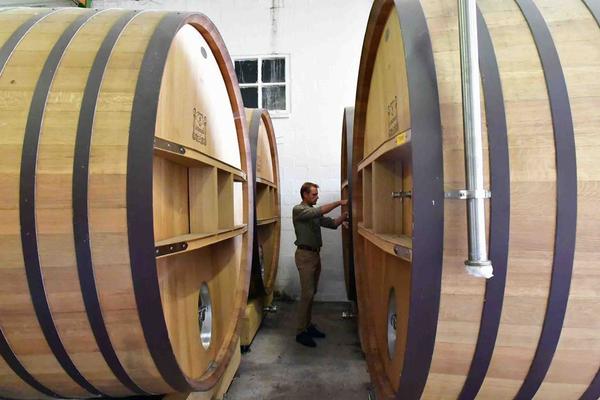 To produce a lambic, the brewer starts off with a wort that contains 70% barley malt and 30% wheat. During a boiling process that takes three to four hours the brewer will add aged hops.

So far, so good. But the unique character of a lambic will only come to the fore after the spontaneous fermentation that occurs later.

There is no need for the brewer to add yeast. In the valley of the Zenne, where the brewery is based, the air contains exceptional bacteria.

As the beer cools down in the open cooling basin, or koelschip, the wort will start to ferment spontaneously thanks to hundreds of local varieties of wild yeast, the Brettanomyces Bruxellensis and Brettanomyces Lambicus (often called Bretts).

This is a completely natural fermentation process without the need for any additives. It takes a long time and a lot of patience to produce a lambic.

It will spend at least one year in oak foeders (giant barrels) or stainless steel tanks to which oak chippings are added. During the first six to seven months the fermentation will convert sugars into alcohol and the agents that account for the lambic’s flavour and aroma.

A pure lambic beer tastes of cider with a hint of sherry. It is truly a beer for gourmets. In addition, lambic serves as the basis for other beers: gueuze, oude gueuze, kriek, oude kriek, faro and a range of fruit beers.

Oude Gueuze is a delicate and balanced blend of lambic of different ages, all of which are then matured in foeders.

Yeast and residual sugars from the beer start off an in-bottle re-fermentation.

To produce an Oude Kriek, krieken cherries (a rare variety of sour Morello cherries) ferment in the beer for a period of six months before the beer is bottled, after which it will re-ferment once more.

Fruit beers contain young lambic and fresh fruit juice, a blend that will re-ferment and macerate. 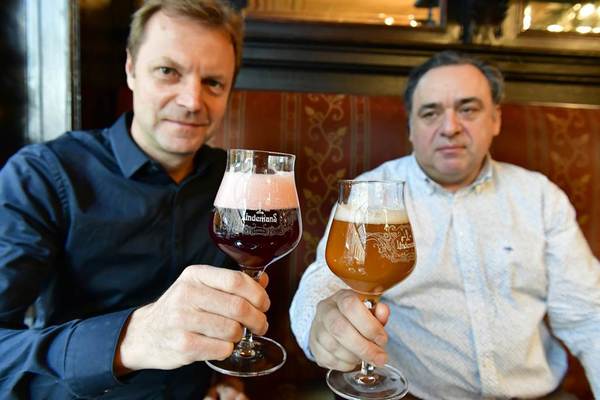 The Lindemans family chronicles provide a beautiful example of the evolution of an agricultural enterprise. It was a farm-brewery where brewing gradually became the main activity, to the point where farming fell by the wayside.

Joos Frans ‘Duc’ Lindemans – nicknames were used to tell people apart who shared a surname and were not always flattering – took over the family business from his father, Joos Frans Lindemans, the founder of the company.

In 1869 Duc oversaw the construction of new farm buildings, which remain standing to this day, as well as the brewing hall.

In those days the farm comprised 75 hectares of farmland and meadows.

The brewery was producing just lambic and faro; fruit beers wouldn’t be added to the list for many years. It was Duc’s son, Théophiel Martin, who gradually withdrew from agriculture in order to focus on the brewery.

Several generations later, in 1961, the brothers René and Nestor Lindemans, René having qualified as a brewing engineer in Ghent, brewed up their first Kriek using traditional methods.

In those days, gueuze and kriek were strictly niche products.

The brewery’s main business was producing lambic for private customers (usually farmers) and cafés that blended their own gueuze from various lambic beers.

The brothers were gueuzestekers (blenders of gueuze), but only in a modest way. And soon Lindemans was to become a pioneer in the production of kriek using cherry pulp, cherry juice and fermented krieken cherries. 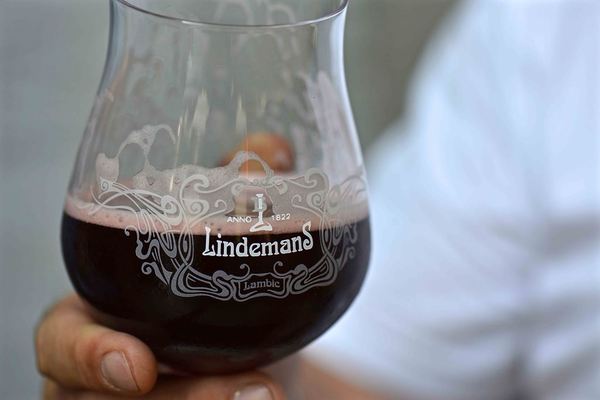 Brewery tours are conducted on work days between 8am and 6pm. The visit takes one hour and includes an overview of the region, the history of the brewery, and the lambic production process. At the end of the tour you are offered a tasting. The tour takes you on a journey through time.

In the old mill works you can view the mill that ‘breaks’ the wheat and the malt before they are transported to the brewhall.

Next to this building you will find the old brewery, dating back to 1869, and the newer brewhall that was built in 1909. The current brewing hall was constructed in 1992 and is able to produce 18,000 litres of wort for each brew.

The ground floor houses the pumps, valves and rudders that produce the brew and transport it to the storage facilities.

The brewery floor is home to four spectacular copper basins: the mashing basin, the mash vat, the filtering basin and the boiling kettle.

If you want to know everything there is to know about lambic beers, make your way to the nearby 'De Lambiek' visitor centre in Alsemberg. It will immerse you in the flavours, aromas, sounds and texture of lambic. The centre is also the starting point for a journey of discovery through lambic country (‘Lambiekland’), the Pajottenland region and the valley of the Zenne.

Many visitors take the opportunity to visit the nearby castles of Beersel and Gaasbeek and to admire the Herisem paper mill. 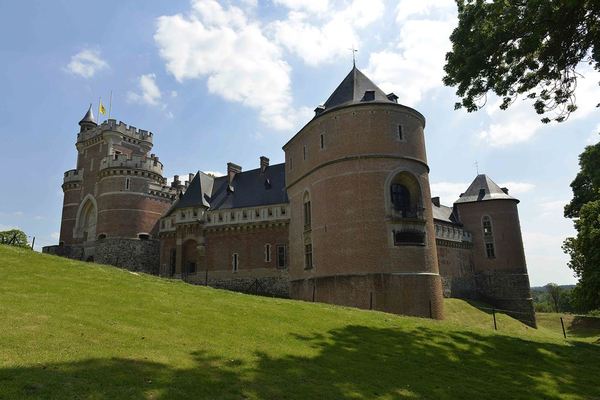 The Pajottenland region is an undulating, green oasis on the western verges of Brussels. The small town of Beersel, on the edge of the capital, has an imposing 15th-century moated castle.

Gaasbeek Castle with its extensive grounds is a reminder of the ancient Gaasbeek Manor that was established by the Duke of Brabant in 1236.

During the 17th century a French-style garden, a baroque pavilion and a chapel were added to the grounds.

Keep an eye out for the exhibitions that are held here from time to time.

The valley of the Pedebeek, another small stream, has the look of an idyllic Breughel landscape. If you want to extend your stay after visiting the brewery, Brussels makes for a great destination. Follow the Ninoofsesteenweg, the main road that takes you to the town of Ninove and from there on to Brussels.

It leads through the beautiful Pajottenland and passes several old lambic breweries and gueuzestekerij’, where the beer is blended.

Lambic beers such as gueuze, kriek and faro are typical Brussels drinks, and you can enjoy them in popular cafés, brasseries, taverns and staminees (tiny pubs).

Many restaurants serve lambic beers to enjoy with a meal, or have regional dishes containing lambic on their menus.

There is plenty to see and to do in Brussels.

Admire its historic city centre with the world-famous Grote Markt and the gothic City Hall, Koningsplein square, the Warandepark, the Grote Zavel, and the impressive Palace of Justice close to Vossenplein square where a flea market is held every morning.

This area is overflowing with antiques shops and sellers of curiosities and collectibles. The tourist office has all the information on Brussels’ many museums and cultural events. 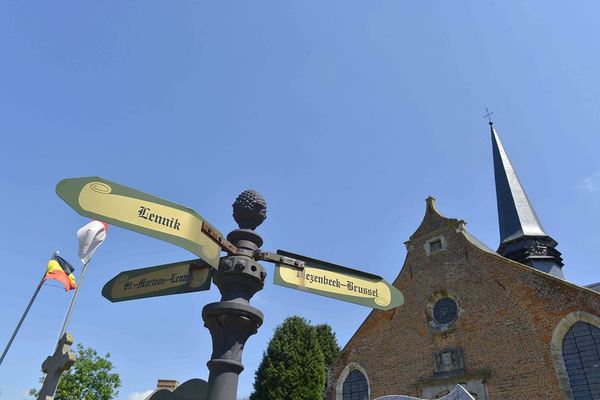 Vlezenbeek is only a 20-minute drive from Brussels. Coming from Paris: E19 Paris-Brussels. Take the outer ring road signposted towards Ghent. Leave at exit 15a, ‘ULB, ERASME’.

From Antwerp, Liège or Zaventem: take the E19 ‘Ring’ towards Ghent. Do not exit at Ghent but continue on the ring road towards Charleroi/Bergen (Mons). Leave the ring road at 15a, ‘ULB-ERASME’.

Ignore the Antwerp and Ghent exits and continue on the Ring towards Bergen (Mons)/Charleroi.

Exit at 15a ‘ULB-ERASME’. From exit 15a: leave the roundabout at the first exit onto Lenniksebaan.

You will find Lindemans on the right, 3km after the roundabout.

If you are using public transport, use bus route 141 from Brussels South railway station. The trip to Vlezenbeek takes half-an-hour. The Lindemans Brewery is at stop 22, code number 307249.

The Pajottenland is a paradise for hikers. The network of walking trails is connected by 270 nodes covering the area of Gooik, Lennik, Pepingen, Roosdaal and Sint-Pieters-Leeuw. The cycle network through Pajottenland and the Valley of the Zenne covers 410 km, connected by 70 nodes. 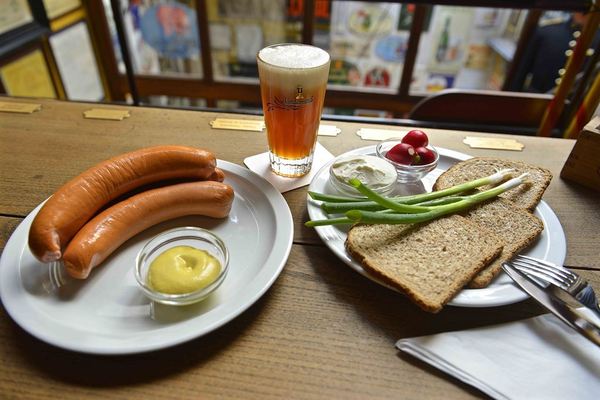 You won’t go hungry or thirsty in the Pajottenland region - far from it! Seated on a sunny terrace or safely within the walls of a convivial inn you’ll feel like a guest at one of the farmer’s wedding Pieter Breughel painted in the 16th century.

Pure and pure go well together on Pajottenland menus. A pure beer like a lambic, an oude gueuze or oude kriek is done justice by honest dishes such as cheese croquettes, meatballs in tomato sauce, a steak or a brochette (meat on a skewer).

There is nothing better to accompany an oude gueuze than a slice of farmer’s bread covered in cottage cheese, radishes and spring onions.

To take the gastronomic value up a notch or two, consider trying an oude kriek with a carpaccio of mature beef, celery, swede, smoked duck and aioli.

Or consider a pairing of an oude gueuze with a guinea fowl stew, roast pork, fillets of sole or a beef tartare made from the famous ‘white-blue’ cattle.

Why not try a lemon sole with asparagus, chicken and mushrooms or sweet and sour ribs on a bed of outdoor-grown chicory? Lambic beers stand up very well to a great variety of cheeses. They make a great counterpart to a strong, blue-veined cheese.

Kriek beers make a great accompaniment with desserts such as choux pastry with a strawberry or rhubarb filling, and work very well in combination with chocolate.