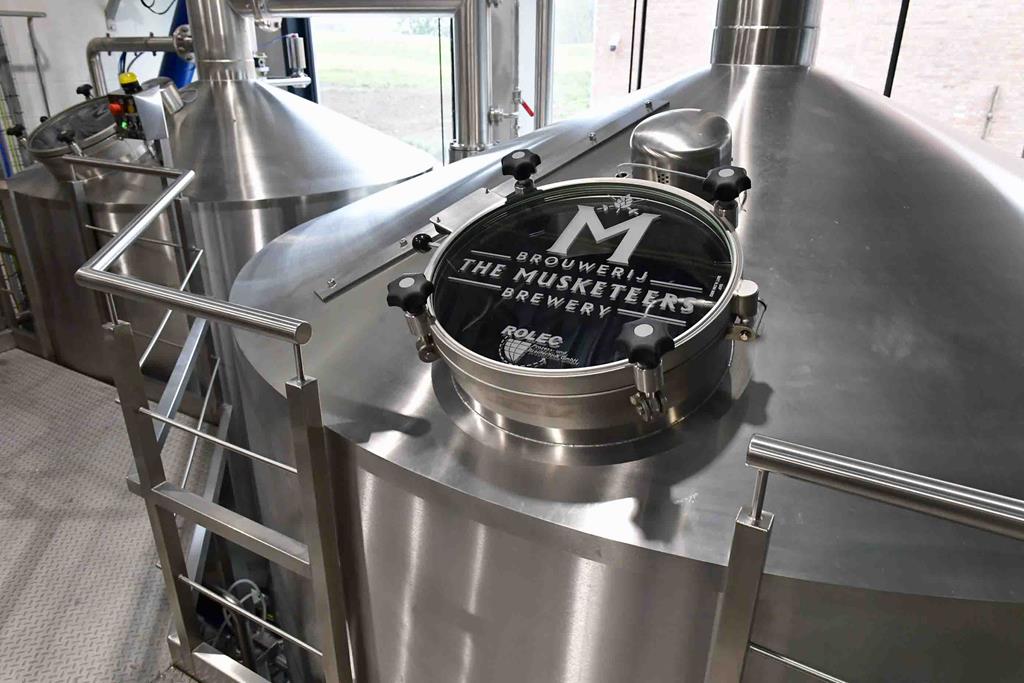 In 1999 four brewing engineers: Kristof De Roo, Stefaan Soetemans, Rikkert Maertens and Sven Suys joined forces to set up Brouwerij The Musketeers, a playful reference to the four musketeers by French author Alexandre Dumas. Their beers were initially produced in collaboration with the world-famous Proefbrouwerij in Lochristi.

In 2009 Stefaan and Kristof took the decision to develop and sell beers as a full-time job. Their work with brewer Dirk Naudts of the Proefbrouwerij, who was their teacher at the brewery school, endowed them with a wealth of first-hand experience. Quality has remained their priority ever since.

Troubadour Blond was the first beer to be launched, followed by Troubadour Magma in 2010, marking an important milestone. This combination of a Belgian tripel and an IPA (India Pale Ale) was well received at home as well as abroad.

The Musketeers continued to expand their range of Troubadour beers. Antigoon, the first in the Belgian Legends series, was launched in 2016, followed by Jack’s Precious IPA. These beers draw their inspiration from local legends and urban myths that get people talking at the bar.

In 2018 The Musketeers introduced the first brew in a range of experimental beers that was given the name of Bucket List. These beers are one-offs and they are produced in limited volumes. The Bucket List beers intend to build a bridge between Belgian tradition and the craft movement. The brewers go beyond the boundaries of established styles with, for example, a New England IPA, and also experiment with new varieties of hop and malt.

In 2019 The Musketeers inaugurated a brand new brewery of its sown, equipped with a high-technology brewhall, bottling line and warehouse, all on the site of a former brickyard.

The Musketeers brew three days a week and on average each batch is 50 hectolitres. Current production stands at 8,000hl but the brewers plan to double this by 2022. Half of the output is earmarked for export to fifteen countries around the globe, including The Netherlands, France, Spain, Italy, China and Russia. 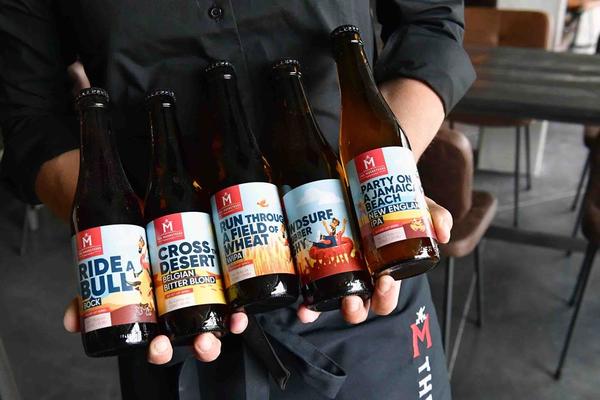 The Musketeers use tap water for their brewing. Brewers Kristof De Roo and Brecht De Causemaecker prefer to use a range of dry yeasts rather than propagating their own yeast. There is a for this; the brewer does not want you to tell the beer from its yeast, as is the case with several brewers who cultivate their own yeast.

All of the beers re-ferment in the bottle and some of them also undergo a prior fermentation in the barrel. The brewers pay a great deal of attention to the look of the beer that is purged and cold-stored depending on the requirements of the beer type.

Thanks to the whirlpool, the proteins in the boiled mash sink to the bottom, as they should.

The brewing process is monitored continuously to make sure that the beer ferments properly and is cooled down at the right point in time.

Years of experience gained from the close collaboration with brewer Dirk Naudts of De Proefbrouwerij are put to good use to achieve a high-quality, efficient output, with brewing volumes varying between 20 and 60hl and a density ranging from 12 to 22 Plato. On average it takes the brewer three to four weeks to produce tap beer and five to six weeks to fine-tune a bottled beer. 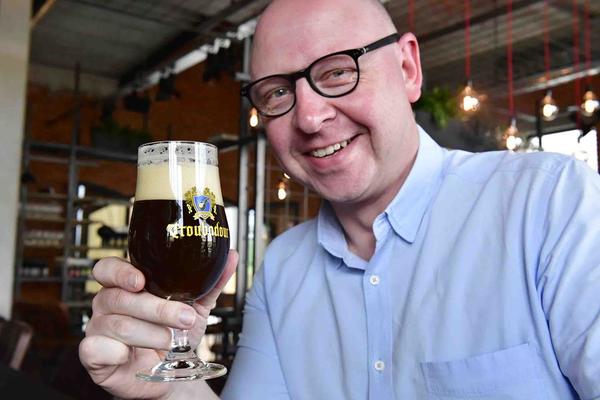 Throughout the years, The Musketeers have established a niche for themselves, halfway between the traditional breweries and the international craft movement. Their beers stand out through the choice of ingredients, which exotic aroma hops, and new brewing techniques such as dry hopping.

The brewers find their inspiration from all over the world. Nevertheless, they fit into the rich Belgian brewing tradition as they strive to create balance in the glass instead of producing extremely bitter or tart beers. With their Troubadour and Belgian Legends ranges, The Musketeers deliver easily quaffable beers with enough complexity [to satisfy discerning palates]. They view The Bucket List as their private playground where they can experiment to their hearts’ content with new combinations of beer styles, new ingredients and so on. Some of their creations are tried out by customers in the brewery café. If such a test brew goes down well there is every chance that it will be included in the standard range. This is how the brewers challenge themselves continuously to come up with new creations

You can visit this brand new, sustainable brewery by special arrangement. The guided tour takes approx. 45 minutes. The old brickyard in Reepstraat was converted into a contemporary brewery café with an industrial look and feel. The brewing hall, the warehouse and the offices are located in new premises adjacent to the café. A splendid glass walkway connects the two buildings.

The brewers want people to start up a conversation whilst enjoying their beer. This is why they chose to incorporate plenty of glass walls in their design. Watch all of the goings-on in the brewery from the café from which, behind a large pane of glass, you look directly into the brew hall. You are welcome to taste the beers in the brewery café from Wednesday to Sunday between 2pm and 10pm (opens at 11am on Sundays). The beers plus various gifts and gadgets are for sale in the brewery store. The brewery is located next to the grounds of the Wase Golf (golf school) and is close to the nodes of walking and cycling routes in the green Waasland area. This tourist attraction is a great starting point for a journey of discovery through the verdant Waasland.

Nature lovers will find plenty to enjoy in the Waasland. The Boudelo Foundation, most of which lies to the south of the Stekene canal, is a veritable natural where silence reigns supreme. You will find similar peace and quiet in the nearby Stropersbos with its signposted walks. A little further on, towards the Western Scheldt, you will find a nature reserve that is known as the Verdronken Land van Saeftinge (drowned land of Saeftinghe). Take a guided tour and discover how the tides still exert their impact on the ever-changing landscape. The Waasland is also home to legendary scoundrel Reynaert de Vos, a well-known icon in local literature. Take your bike and go in pursuit of the fox. You can choose from three signposted trails: the Canteclaerroute (46 km), Nobelroute (50 km) or the Tibeertroute (50 km). If you want to find out more about the local area, we recommend the Tempusroute (38 km).

The Wire of Death (Dodendraad) at the Klingspoor railway museum is a reminder of the First World War when, in an attempt to prevent smuggling across the Dutch border, the German occupiers erected an electrified fence.

A great day on the bike is guaranteed if you make your way from node to node on the cycling network. There is also plenty of fun to be had by cyclists along the dykes of the rivers Scheldt and Durme. If you are on a family trip, we recommend you visit the provincial domain of Puyenbroeck in Wachtebeke. Culture lovers will enjoy a visit to the De Verbeke Foundation, a museum and sculpture garden in Stekene where culture and nature go hand in hand.

The brewery is half an hour’s drive from Antwerp on the E34 (turn off at Kemzeke) or 45 minutes from Ghent on the E17 (exit at Waasmunster). From Brussels, getting there should take no more than an hour via the A12 then the N16 towards Temse and St-Niklaas. Are you travelling on public transport? By train from Brussels, you get to Sint-Niklaas in an hour. Add half an hour for the bus (routes 21, 22, 27), or take the direct bus route 85 from Antwerp (www.delijn.be). If you want to reach the brewery by bike, there is a safe route that follows an ancient railway line between Hulst and Sint-Niklaas. A charging point for electric bikes is provided.

If you want to explore the Waasland you simply must visit its ‘capital’ Sint-Niklaas which has the largest market square in the country (3.2 hectares). Admire its town hall in neo-gothic style, the neo-Romanesque Church of Our Lady, the predominantly gothic Church of St. Nicholas, the classicist old parsonage, Walburg Castle - a moated castle in the middle of the city and surrounded by parkland -, the many splendid mansions that were once the property of textile barons as well as several farmhouses in the typical Waasland style. Local history is brought to life in the SteM municipal museum, located in a former weaving mill and dyeing works. The Mercator museum tells the story of cartography, in chronological order from ancient times up to the modern day, with a focus on the life and works of local cartographer Gerard De Cremer (16th century). If you prefer to view the Waasland from a bird’s eye perspective, we recommend you book yourself on a balloon trip. This is only one of the many activities in and around the the town of Sint-Niklaas.

You can eat and drink to your heart’s content in the rural Waasland area. The proximity of the Scheldt and Durme rivers explains the many regional specialties made with river fish, like ‘paling in ‘t groen’, a dish prepared with eel and garnished with local herbs, that is served served in glass dishes. If fruit is your thing, you don’t have to go far afield as this area is known for its fruit produce. There is a 9km long fruit route suitable for walkers and cyclists so they can explore the orchards of the region. The hop jenever distilled by the Verhofstede brewery crosses the bridge between beer and spirits. Verhofstede’s own hop extract provides the taste and the alcohol from the grain takes care of the finish. One of the specialties offered by the butchers of Waasland is a spicy, zesty sandwich spread known as ‘boulliesla’. It uses ground beef, a mustard vinaigrette, and onions steeped in vinegar.

The Musketeers have also developed a Troubadour cheese that suits their beers to a tee. Discover successful food pairings with the beers from Brouwerij The Musketeers in the brewery café or else in the brasserie at Wase Golf. Another culinary recommendation is restaurant Beurre Noir at Sint-Gillis-Waas. Their beer cuisine comprises dishes prepared with Belgian beer and fits perfectly into the Belgian tradition. In recent years chefs and sommeliers have developed an interest in the art of combining beer and food, working with either contrasting or complementary aromas and tastes. Why not find out for yourself? Pop into a café-diner, brasserie or restaurant and ask a sommelier or chef for their advice.

In 1997 Pierre and Vinciane Delcoigne purchased Irchonwelz, a 12th-century castle, with the inten...
Read More
GET LATEST BEER NEWS