A meandering journey through Beerland 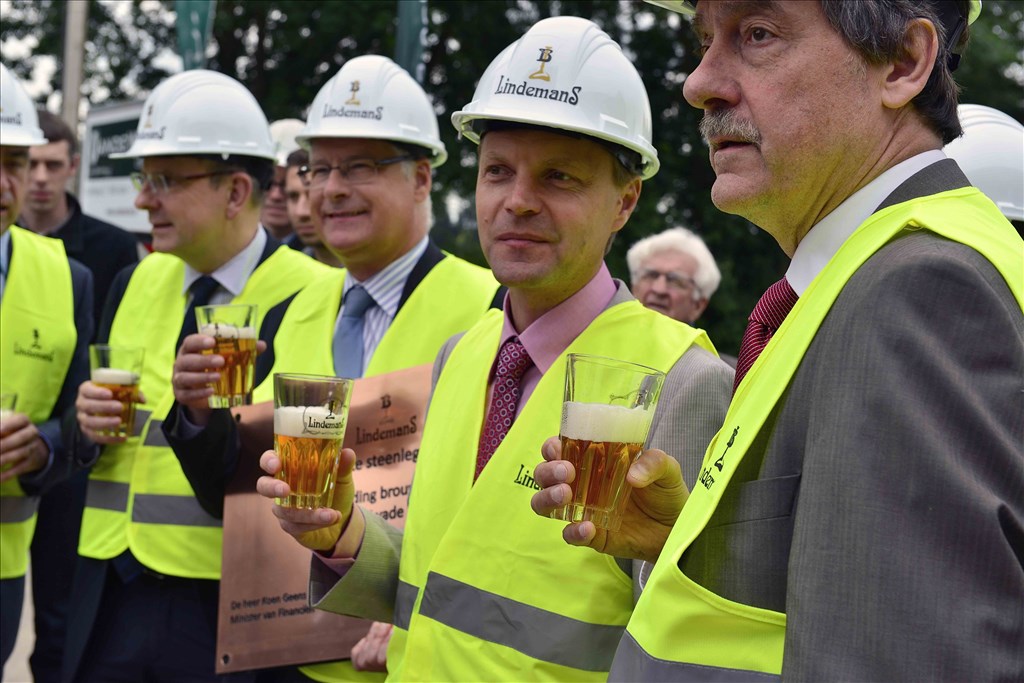 VLEZENBEEK - At long last, summer has officially arrived in the country. After a cold, wet and above all unpredictable spring the barometer has promised to be on its best behaviour. It’s raining barbecues, street parties, fairs and beer festivals. I’ve made a promising start to the week with a visit to a... building site.

I travelled to Vlezenbeek in the heart of the Pajottenland region. Lovers of lambic and oude gueuze are familiar with this area outside Brussels. This is the kingdom of the brettanomyces bacteria.

They’re floating in the air and ‘infect’ the lambic beer as it cools down during its spontaneous fermentation. Lindemans is a well-known name in the world of gueuze.

The sixth generation of the Lindemans family now hold the reins of the company. This, the largest independent lambic brewery, produced well over 8,500,000 litres last year.

Over half finds its way to the USA, France, Russia, Switzerland, China and Japan. “Exports are booming,” manager-shareholder Geert Lindemans tells us. “There is so much demand from abroad that we are in urgent need of warehousing, botlling and packing capacity.”

Which is why I find myself here today. There are plans for a new building and we have been invited to watch Finance Minister Koen Geens lay the first stone. The ceremony is managed very carefully. As is proper, the minister only gets his drink when the work is done.

The risk of a crookedly placed first stone is not one the family is willing to take. You don’t improvise when there is an investment of €15 million at stake.

Geert Lindemans: “We want to be able to store more lambic. It’s a fact that the traditional brewing process takes up a lot of space because of the long fermentation and maturation.

We brew during the winter but our beers are mainly consumed during the warmer months. So, we must be able to store the entire annual production.”

The building will not only be used for storage. It will also house offices, quality control and a new visitors’ centre for 100 guests. It should all be ready by April 2014.

In addition to Oude Gueuze, Oude Kriek, Gieuze, Kriek and Faro the Lindemans brewery produces many other lambic-based fruit beers, such as Framboise, Cassis, Apple and Pecheresse. 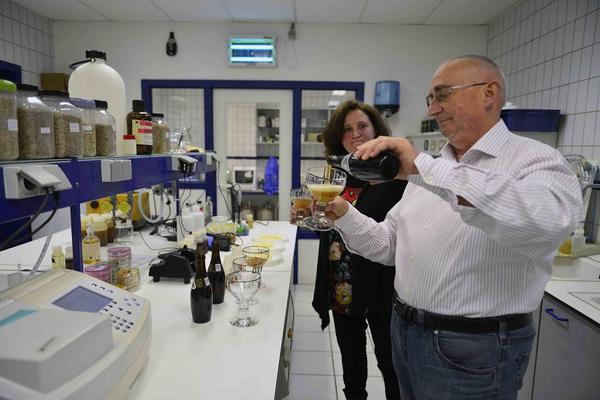 A change of scene. I’m enjoying a day in the Ardennes. As I get closer to Orval, any trace of stress melts away. Brewmaster Jean-Marie Rock prepares the degustation for his team. He is taking the tops off bottles of... Bud and adds various tablets. I enquire about the purpose of this ritual.

“We find a neutral beer and add various aromas. Our people must be able to detect the correct tastes,” Jea-Marie says. “This allows them to taste ‘technically’.” Jean-Marie has been with Orval for 28 years and is close to drawing his pension.

Before the end of the year he will pass his baton to Anne-Françoise Pypaert. However, enjoying a well-deserved rest could not be further from his mind. This sprightly sexagenarian will be starting up a new brewery. We’ll talk more later about this new adventure...

Anne-Françoise gives me the tour. She tells me that the entire brewing process takes up to nine weeks. Orval is only ready to drink when the wild yeasts, the brettanomyces, have done their work. “We will let the bottles rest for five weeks so that the in-bottle fermentation is progressing well,” Anne-Françoise informs us.

“Local beer lovers will then wait another six months before cracking open their vieille Orval. This will result in a more rounded and somewhat milder beer.”

We lunch in L’Ange Gardien, the on-site restaurant where I taste the ligher green Orval. This is what the monks have with their meals and it’s a beautiful pairing with Orval cheese.

Before my day draws to a close, I take a walk through the medieval abbey ruins. Legend has it that Countess Mathilde spent some time here pondering her future after the death of her husband Godfried the Hunchback.

In an unguarded moment she dropped her wedding ring into the well. She prayed avidly to the Virgin Mary, whereupon a trout suddenly jumped out of the water and returned the ring to her. The fish holding the ring was to find it way into the Orval logo.

Today, no matter how hard I try, I am unable to pull off this trick. There is no trace of fish in Mathilde’s well. But thanks to the water, the beer is delicious. 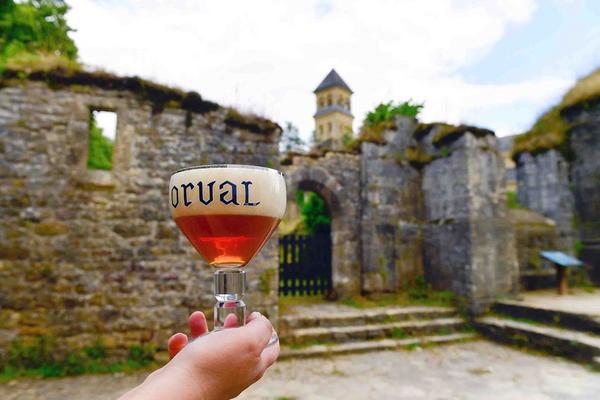