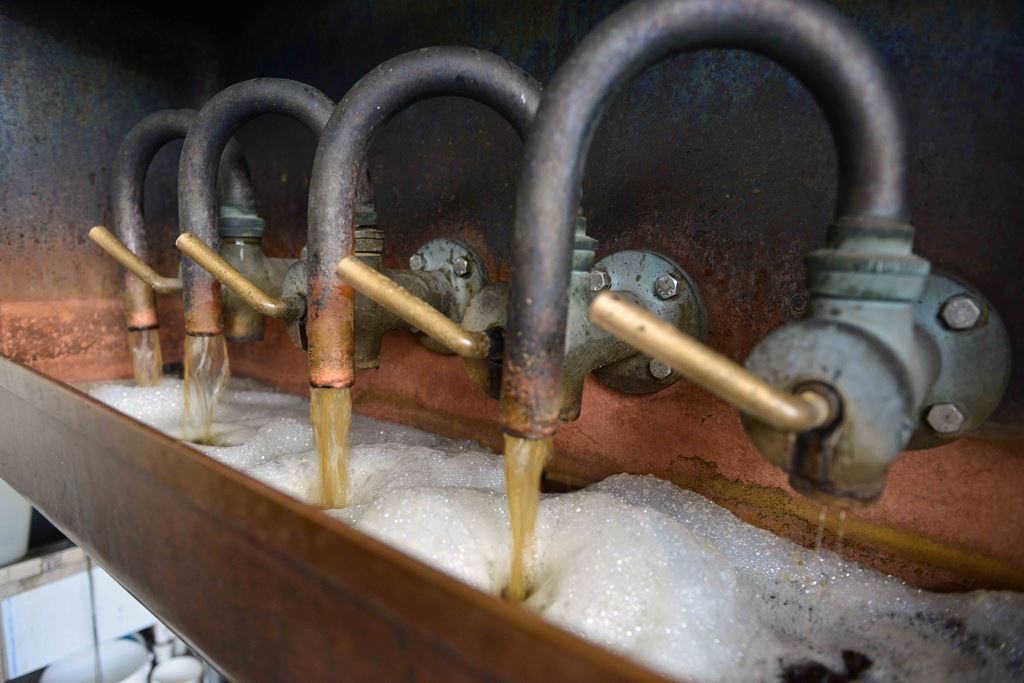 VICHTE - It might be a cliché for those producing brews as rooted in history as 'roodbruin' is. But Karel and his brother Peter really are scions of a brewing dynasty. “We have been brewing here since 1817,” he tells us. “Can you see the chimney in the courtyard? That used to be part of the malthouse.”

Not that the old ways have persisted unchanged. The fortunes of their Verhaeghe-Vichte family-run brewery have ebbed and flowed, just like those of the red-brown beers they brew, beers so typical of West Flanders.

“My grandfather stopped producing malt in 1948. He could not make a living out of it,” says Karel. “If you want to work with different varieties of malt,” he continues, “you need larger volumes."

"Malting is now a stand-alone activity. There are industrial malt producing plants that supply the pils brewers, as well as a handful of semi-industrial maltings that focus on speciality malts”. The brothers have vivid recollections of how popular their Vichtenaar beer used to be in the local area.

Though the café taps have never actually stopped pouring this beer. The brothers do not think it is a coincidence that the 'roodbruin' beer style has held its own here, for so long, against the pils beers:

“This is essentially an agricultural region. The industrial revolution passed us by. As the area was sparsely populated it was not a market of interest for the large brewers."

"The textile industry brought increased prosperity and also, people are a lot more mobile these days. We’ve been lucky in that we were able to benefit from the speciality beers revival in the 1970s”, opines brother brewer, Peter Verhaeghe. 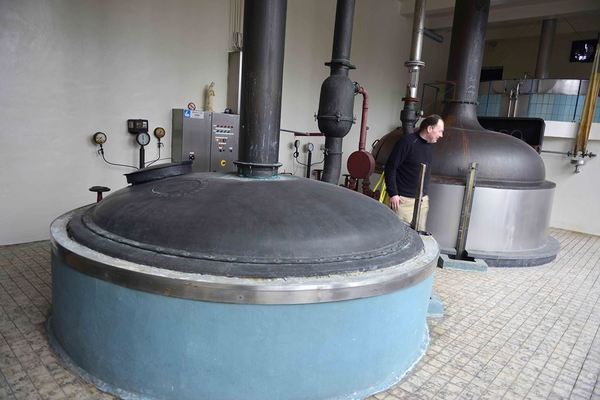 Karel and Peter Verhaeghe are now producing two stalwart West Flanders red-brown beers at their brew-house – the Vichtenaar (5.1% ABV) and Duchesse de Bourgogne (6.2% ABV). The Vichtenaar has a fresh, slightly sweet taste with a fruity finish, while the Duchesse de Bourgogne is a sweet and fruity beer with a pleasantly fresh, but slightly more sour ending, complemented with oaky aromas.

The 'Duchesse' is brewed with intensely roasted barley malts and aged hops. Its main fermentation and secondary maturation stages are followed by a third maturation phase, of around eighteen months, in oak barrels.

It is the tannins naturally present in the oak that lend the ‘Duchesse’ her fruity character. When the ‘Duchesse’ is fully matured she will be cut (blended) with younger, eight months old beer.

I think that this may be a beer suitable for laying down, and say as much. But Karel disagrees with me. “My personal recommendation is to drink our ‘Duchesse’ after half a year. Old beer really is a niche product for a small group of aficionados. A beer generally does not improve by storing it for longer, with the exception of 'lambiek' beers”.

The tradition of sour beers goes back to the Middle Ages, and the reasons for its development have a lot to do with the tricky matter of beer storage. Hops had not yet been introduced to this part of the world, and brewing was done with a herbal mixture called ‘gruit’. 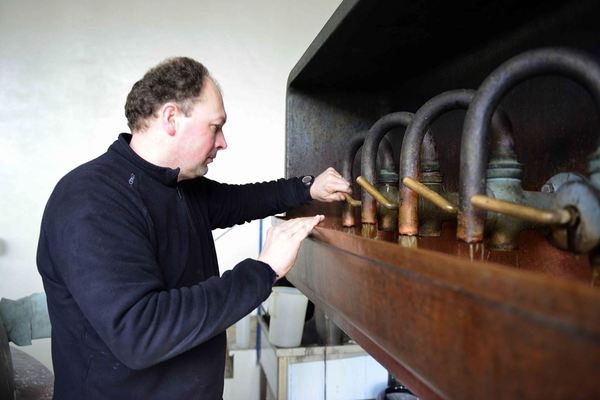 It was in the 12th century that the German abbess, Hildegard von Bingen, described the workings of hops. Gradually the imported hop plants pushed out the use of the ‘gruit’ mixture in most places, as hops turned out to be a better conservation agent. But not everywhere. The sour beers of West Flanders, and beyond, are the heirs of these 'gruit' beers. And the reason lay in that sourness.

Without hops, allowing the beer to turn sour was the only option, if you wanted to store it. But for those places where the souring technique had been mastered, hops weren't needed. It's for this reason that you will never find an overpowering bitterness in Oudenaards 'bruin' or West-Vlaams 'roodbruin' beer.

It is most noticeable that these two sour beer styles are found in the former County of Flanders – to the west of the river Scheldt – and not in the former Duchy of Brabant. It is Brabant where the hop plant was introduced earlier, simply due to its proximity to the Holy Roman Empire.

The brothers see West-Vlaams 'roodbruin' as a unique beer style, characteristic of one region, just like 'oude geuze' or 'saison'. “Together with our colleagues from Rodenbach, De Brabandere (Bavik) and Brouwerij Omer Vander Ghinste (Bockor), we have applied for European protection. We expect to gain this within one to two years.”

“This will entail official recognition of the production method, as well as its geographic origin. For the consumer, this means that he or she can quite quickly discover which beer is authentic, and the beer style that it belongs to,” Karel Verhaeghe explains. Such recognition would bring the Belgian beer revival of the 1970's to a successful conclusion. 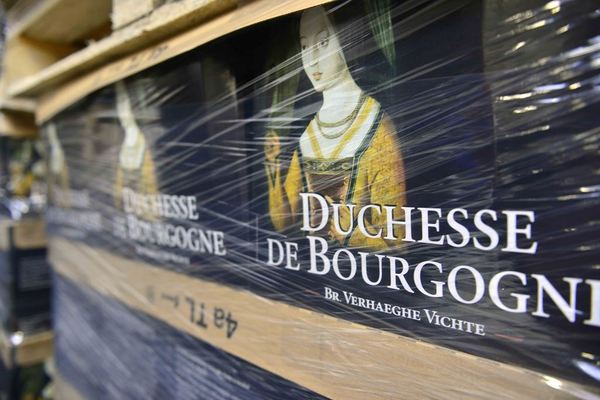 Back then, the public was getting bored with the omnipresent pils beer and ready for something else. It was in the 1970s that Pierre Celis successfully re-launched the Hoegaarden white beer. Then the early 1980s saw the rise of the first microbreweries (De Dolle Brouwers, Achouffe), while the 'lambiek' beers put themselves back on the map as well. In essence we saw a gradual return to the authentic tastes from days gone by.

A prime example is the Caves beer from the town of Lier that is now brewed by Verhaeghe-Vichte. “All of the seventeen breweries in Lier had closed their doors.

Then the ‘Heren van Lier’ Guild knocked on our door and asked us to brew this beer, with its medieval origins, once again. They asked us in particular because we still use wooden barrels”, the brewer explains.

In the meantime, a lot of beer has flowed through the taps. Within a borderless Europe, with its single currency and market, the audience for 'roodbruin' kept on growing. Nowadays, the entire world is at the brewers’ feet, thanks to the reach of the internet. And the big boys. One thing AB Inbev has done is put Belgian beer on the world map – and helping to make the ‘Belgian beer’ brand one that equals top quality.

The brothers fully recognise the importance of this focus on quality – and on continual improvement. “We produce authentic beers of consistent quality. This doesn’t stop us from changing and innovating, though, far from it.”

“We are making continuous investments in infrastructure. Quality shows in every detail. We pay attention to the packaging, for example. It should be pleasing to the eye,” says Karel.

However, the brothers would like to keep things on a modest footing. They don’t like anything too showy, so any merchandising proposals will most likely fall on stony ground. “We are selling beer and nothing else”, sums up their refreshingly straightforward attitude. 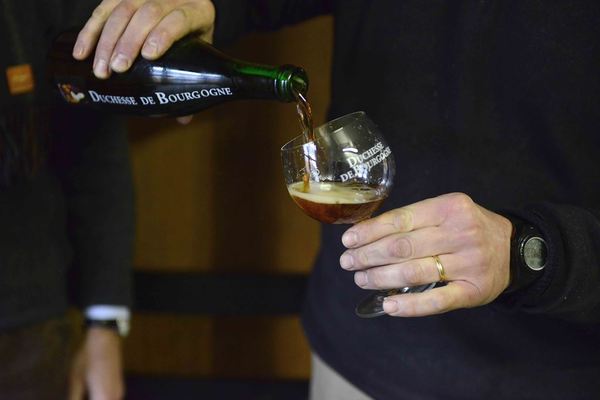 Karel Verhaeghe is forever singing the praises of Belgian beer culture. But he can also be unstinting in his criticism. His main regret is that the Belgians are not proud enough of their beer. “Often, foreigners know far more about our beers than we do! Belgians are very attached to a brand. They are led by marketing, stick to their favourite brand and are not curious enough."

"Such a crying shame, as there are so many hidden pearls in this beer country of ours”. During this discourse Karel is sipping from his glass and is visibly enjoying its contents.

“Beer culture involves slowly enjoying the riches contained in a glass of beer, being able to tell apart the aromas and the tastes, sharing with friends and mates. Brewing takes a lot of time, so you should take the time to discover a beer and taste it properly”. 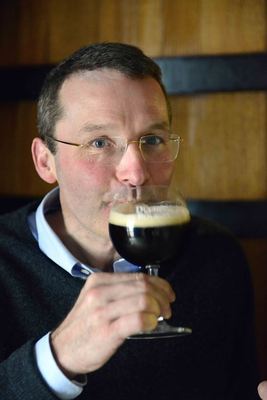