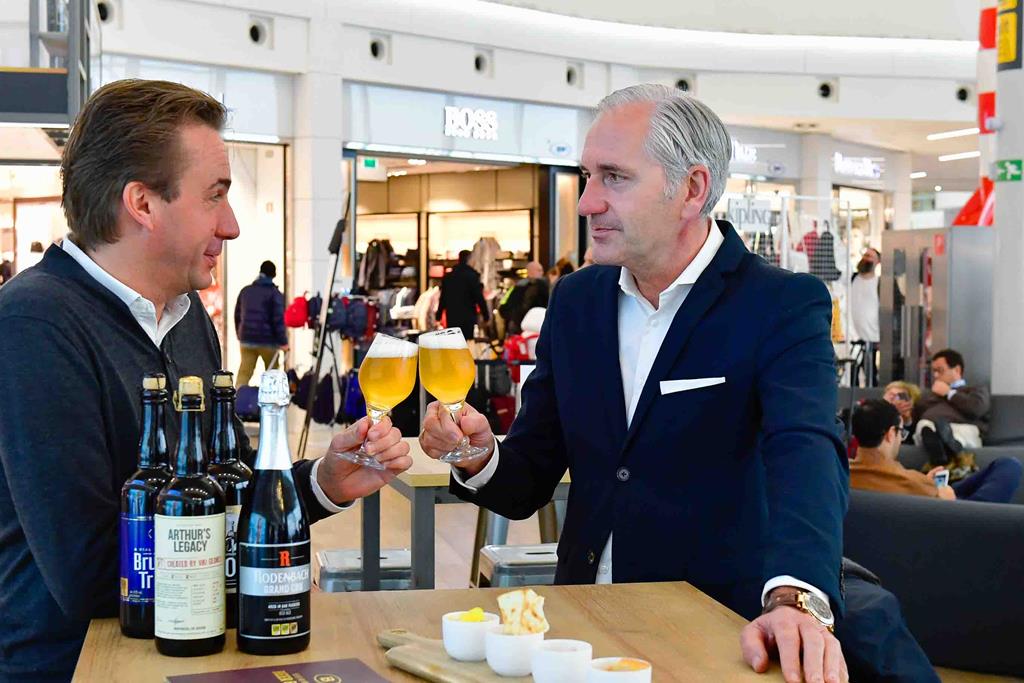 BRUSSELS/ZAVENTEM - This year Brussels Airport is 60 years young! The airport is planning to mark this milestone by showcasing the very best of Belgian produce, which would not be complete without chocolate and of course, beer. This is a great opportunity to show off the very best of our products, the Palm, De Hoorn and Rodenbach breweries quickly realised.

Between 17 September and 7 December their ‘World Beer Award winners’ Cornet, Rodenbach Grand Cru and Brugge Tripel are stealing the show at the Best of Belgium Beer & Bites pop-up zone located in the duty-free area of the airport. The beers are served in small, 18cl tasting glasses. The snacks served on the side show the signature of Viki Geunes, chef at Antwerp restaurant ‘t Zilte, winner of two Michelin stars. Viki has been collaborating with these breweries for over ten years and knows their beers inside out. What’s more, this chef has helped to develop beers for Rodenbach as well as the De Hoorn microbrewery. Needless to say, his Arthur’s Legacy by Viki Geunes joined the ranks of the beers on display.

If you like the taste of the beers, you can purchase the Best of Belgium beer box from the shop right next to the pop-up. Travellers who choose to sample all four beers with appetisers to match will enjoy a gastronomic meal consisting of a fish and meat course, a vegetarian dish and a dessert. If you want to try the beers on a more modest scale, you can just limit yourself to one single tasting or one, two or three combinations. 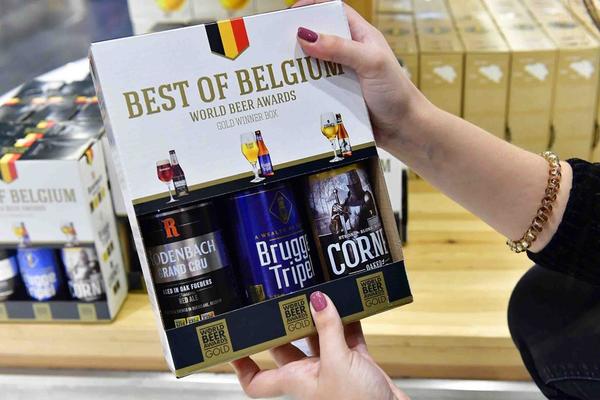 Cornet makes a perfect match with ‘Kalfskop, Belgian pickles, silverskin onions and a potato crunch’. The refreshingly sour flavours of this dish break through the touches of vanilla contained in the full-mouthed, wood-matured beer. Rodenbach Grand Cru is the chosen companion for ‘tomato, hand-peeled grey shrimps, horseradish and sourdough’. “Rodenbach with a shrimp-tomato combo has proved its worth as a classic pairing,” Viki feels. “The ‘soured ale’ is reminiscent of wine and provides a beautiful contrast with the underlying touches of sweetness, with the horseradish contributing a fiery note.”

Brugge Tripel is a surprising combination with ‘Bruges cheese, watercress, radish and mustard seed’. In this vegetarian appetiser the emphasis is on the herbs which are highlighted by this zesty, blonde beer. Boiled and pickled mustard seeds bring a hint of sour to the dish and are offset beautifully by the zesty watercress. Our tasting culminates with Arthur’s Legacy by Viky Geunes paired with ‘Dulcey chocolate, speculoos, orange and ginger’.

Viki: “The chocolate mousse is slightly caramelised and tastes of orange and ginger, two flavours that are also found in the beer, in addition to juniper berries and cloves.” Two Swedish travellers, one of whom swapped the Far North for San Francisco, are enjoying their Rodenbach Grand Cru and Cornet. A model from Las Vegas is sipping her Brugge Tripel and spooning up her cheese treat. Giorgio from the Italian city of Modena is taking things at a faster pace. He is visibly enjoying himself. Mission accomplished. 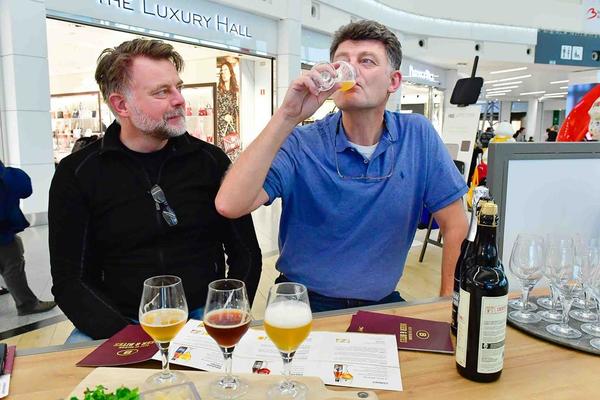 Travellers are hurrying to catch their flight, are relaxing before or after their flight or are killing time between flights. Every three months, 2.5 million people from around the world pass through the airport; up to 37,000 per day. “This is a showcase for the entire world,” finds Peter Buelens, PR & Communication Manager at brewery-owner Swinkels Family Brewers.

“But we are selling a good story. Taste the beers in combination with the appetisers and you are won over straight away. We did take a long time to develop this approach.”

The chef conceived the Best of Belgium Beer & Bites with the beers as the starting point.

Moreover, the concept is highly flexible and follows the pace of travellers, some of whom may be in a hurry, others less so. The cold dishes are ready in the blink of an eye and the matching beer is quickly bubbling in the glass. “By definition, this pop-up is only temporary but we expect the effect to linger for a long time,” Peter Buelens concludes.

“We developed this concept all on our own without the involvement of consultancy bureaus or other external parties. We have already received lots of positive comments from travellers. What’s more, we are convinced that this type of convenient, quick-to-implement food pairing at gastronomic level will serve as an inspiration to the hospitality industry.” 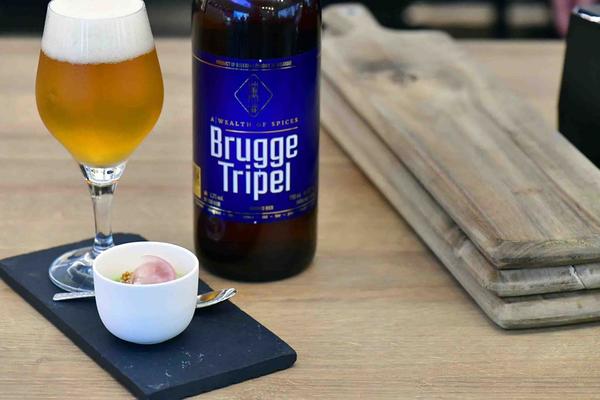