Cheese and Beer - A Marriage Made in Heaven 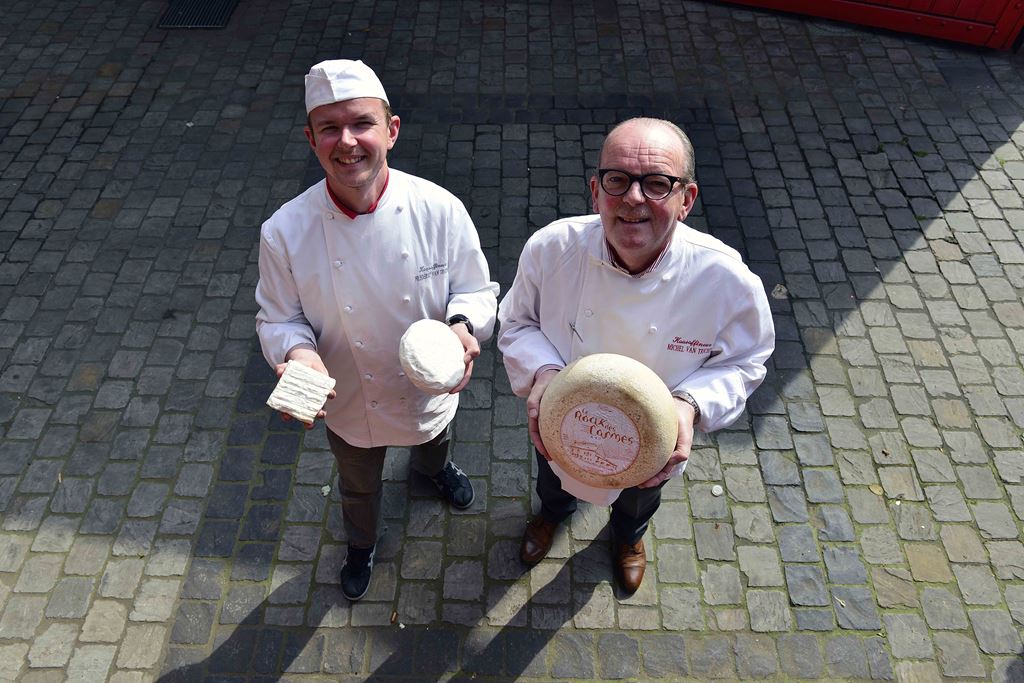 BERCHEM - A store in Berchem near Antwerp has been crowned Best European Specialty Cheese Provider, according to the Wall Street Journal. It has the stellar performance of cheese affineurs Michel and Frédéric Van Tricht to thank for that. Their cheeses are sourced from the farthest corners of Europe. They have mastered the art of cheese ripening to perfection. And both have a soft spot for... you guessed it, Belgian beer.

We meet at the store. There is a brisk trade in comté and gruyere. Dad Michel is singing the praises of the traditional herve cheese from Ferme du Vieux Moulin in Battice, Belgium. Son Frédéric is talking about ‘fermiers’, small-scale farmers who continue to use raw milk. There is no lack of specialty cheeses.

Take, for example, the Reblochon Fermier from the Haute-Savoie in the French Alps. “For three or four months in the year, the farmer moves his cattle to the Alpine meadows at 1,600m,” Frédéric relates.

“The animals feed on Alpine grasses and herbs, hence the superior quality of the milk.” This affineur selects top-of-the-range products only. And he has the art of cheese ripening down to perfection. 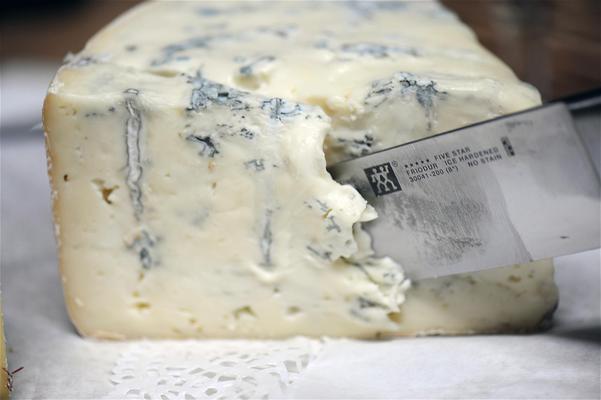 Almost all of the cheeses are reaching maturity in dedicated areas of the former bottling plant of the De Koninck brewery in Antwerp. The beer itself is now being bottled elsewhere. How symbolic can you get? The cheese is ripening at the brewers.

Frédéric: “We buy the cheeses when young and finish them off ourselves. We store them in a special way, at a certain temperature or humidity to promote the growth of particular types of mould. Or we turn the cheeses regularly during the ripening process.

Sometimes we rinse them in alcohol.” It is then up to the customer to decide which cheese to buy and at which particular stage of the ripening process. Van Tricht is a well-known name in the world of fine dining. This cheese affineur is a supplier to star-winning restaurants, such as 'Hof Van Cleve' in Kruishoutem or 'De Karmeliet' in Bruges. 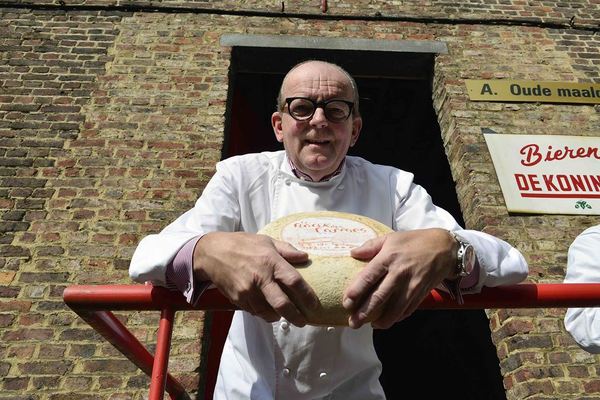 Michel Van Tricht is a great promoter of the cheese-beer marriage. “Admittedly, cheese and wine are a great combination, especially white wine,” Michel concedes. “But why not take a more exciting culinary detour? Go for cheese and beer! You will discover a whole new taste universe: bitter, sweet, fruity, herbal, with touches of chocolate, nut or flower aromas.

Abbey beer, amber beer, blond, brown, fruity or white.... Our country is surprisingly versatile in offering brews in almost all colours of the rainbow. Light or strong. You are guaranteed to find a cheese that complements your chosen beer.”

Why the beer-cheese combination? Cheese, because of its creamy fatty character, covers your taste buds in a thin layer. To free up those taste buds, you need a tangy and bitter drink.

Beer is ideal as it has a bitter taste and because it is consumed in mouthfuls. This allows the chemicals in the beer and cheese to react together, giving a unique taste on the palate. Cheese is a complement to beer, which comes in a range of flavours including tangy, sweet and bitter but not salty. Thus, beer and cheese make for a fascinating combination: no beer is the same and the same goes for cheese.

So, if you are trying out different cheeses with different beers, the range of surprising new taste combinations you can discover is endless.

Michel: “Don’t be limited by accepted guidelines and dare to experiment. Play with the different flavours.” Build on taste. The lighter the cheese, the lighter the beer. And a herby, piquant or strong cheese likes the company of a beer with a pronounced, sweet or complex taste and aroma. Set off on your journey of gastronomic discovery.

Combine an abbey beer with an abbey cheese, but have the courage to pair a gueuze with something else than the tried and trusted 'Brabant accompaniment' of 'plattekaas' (fresh cheese).

Personally, Michel prefers a freshly drawn pilsener beer with just the right amount of hops. “It livens up your palate. Switch to beer when the cheese course comes around. Your palate is refreshed and the greasy mouth feel disappears thanks to the fresh beer!” 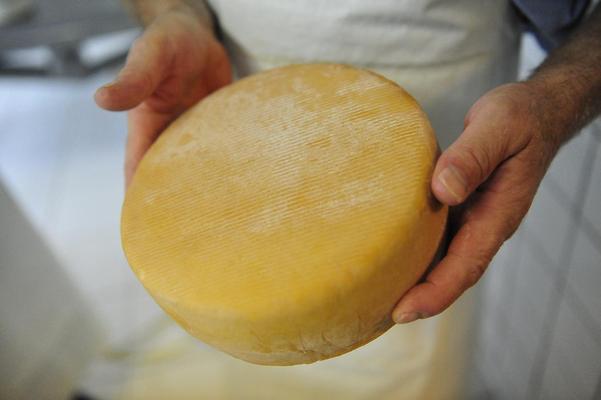 Guidelines To Pairing up Cheese with Beer...

You can try out an infinite number of combinations, but below are some rough guidelines to get you started. Low fermentation beers (pilsner) and white beers go well with hard cheeses as well as zesty ones. The best partner for fresh cheese (‘platte kaas’) and herbal cheeses is a spontaneous fermentation beer such as gueuze.

Cheeses of the mild and creamy type, such as abbey cheeses, make a good combination with Trappist and abbey beers.

Sweet and slightly tangy beers of the Rodenbach type bring out the taste of cheeses using mould, and blue cheeses. Ripe and refined cheeses (hard or soft) prefer the company of a high fermentation beer (amber beers and abbey beers).

“Just like beers, cheeses show a huge diversity. Even cheeses from the same region can have an entirely different aroma with a taste to match."

"It remains a question of tasting, choosing and balancing flavours against each other,” opines Frédéric Van Tricht. The marriage between cheese and beer is far more obvious than its pairing with wine thanks to the vast range of aromas and tastes. However, it is impossible to use one beer to match all types of cheese.

You have to serve a number of beers and then find the cheese to match. Frédéric: “The beer’s taste has to flow harmoniously into that of the cheese you have chosen to accompany it, followed by rinsing the mouth with beer to neutralise the cheese flavour. The beer envelops the cheese and so creates a harmonious taste experience.” 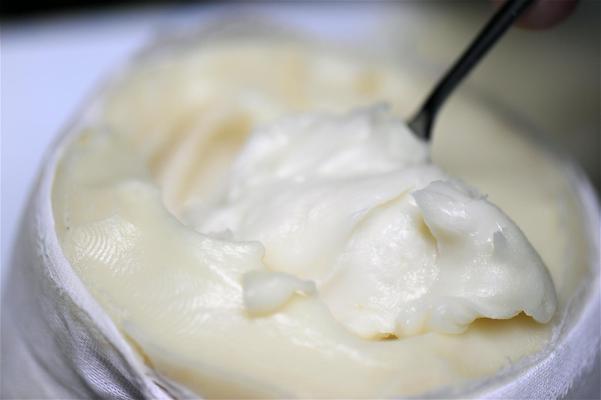 What does the Van Tricht family recommend to accompany your cheese dish? Always start with the beer and find a cheese to match it, not the other way around. Serve various beer styles and find the perfect cheese to go with it. Taste, discuss with your fellow guests and discover the perfect combination together.

Place the beers in the right order, from blond, light and neutral to dark, strong and more pronounced. Keep sour beers back until last and, if you wish, finish off with a fruit beer.

Make sure that there is an evolution in bitterness, from the least bitter to the bitterest beer. Use small tulip-shaped wine glasses for tasting. And make bread available to neutralise any possible lingering aftertastes.

Focus on the taste of the cheese. Avoid ‘signal breakers’ like nuts, grapes or salads as they will influence the taste. Provide high quality bread (a sturdy rye, nut or currant bread, for example).

Serve a minimum of one cheese of each type: semi-hard cheeses, hard cheeses, blue mould, white mould, red mould plus a goat’s or sheep cheese.

Some Matches Made In Heaven