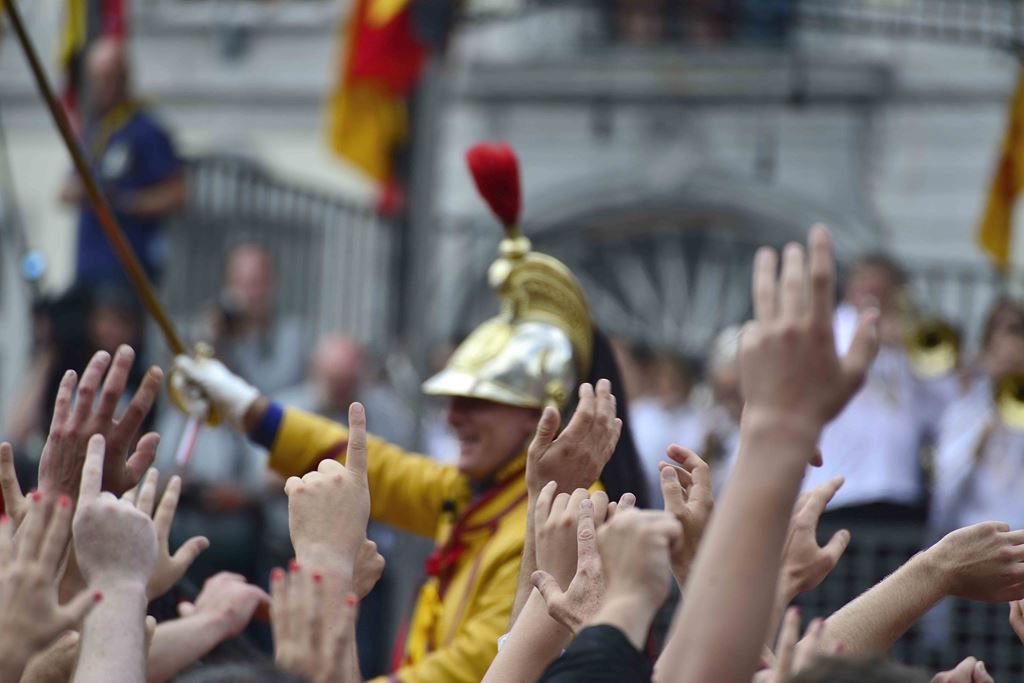 MONS - I had to shake my head a few times just to wake myself up. Yes, I was clutching dragons’ hair. But how did it get there? Surely I had not been doing battle with a dragon?

Time to rewind… Sunday morning in Mons; the entire city is buzzing. Fifteen hundred people take part in a procession that snakes through the crowded streets. Every club, trade and guild takes part in this ‘defilé’. Emblems, badges, relics and statues are proudly on show.

Undoubtedly the entire city of Mons has been looking forward to this event all year. People have wormed their way through to find a spot, some with just a partial view. All the terraces and balconies are full to bursting point. The crowds now give out a collective sigh of relief. The feast can begin... 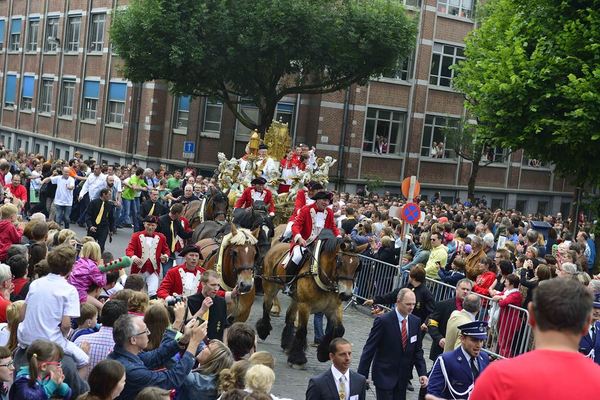 All of a sudden people cry out: ‘St. George has arrived!’ This patron saint of the city, riding his horse and proudly bearing his helmet, slowly trots at the head of an imposing parade. The crowd is now eagerly awaiting the arrival of the 'Car d’Or' (1780) bearing the relics of Saint Waltrude.

This tradition harks back to the 14th century when the plague was sweeping across the Low Countries. This holy woman was thought to have powers to ward off the plague and her remains were therefore carted around the city.

Many centuries on, the entire city still moves to the rhythm of this religious procession.

The cart is pulled by six shire horses. However, a great obstacle awaits; the alley leading to the Church of ‘Sainte-Waudru’ is very, very steep.

The cart that left from the church now has to return to the same place … or else. The crowd is gathering behind the cart. Those of a muscular disposition know what is expected of them. They give a big collective heave and push up the Car d’Or in one single movement. They know that whatever happens, they are not allowed to pause as, if the ascent is interrupted, one year of bad luck will await the city.

This year, there is no danger of that happening.

The cart is racing towards the church at the speed of light and it is all over within a few seconds.

I only just managed to catch a glimpse of a priest, a troupe of choirboys and the holy relic. They’re all gone in the blink of an eye. The spectators give out a collective sigh of relief. You never know.... 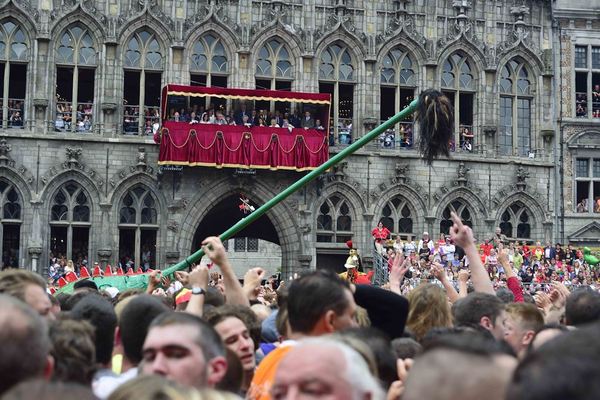 Pulling the tail off a dragon

A spectator tells me to hotfoot it to the main market square if I want to witness the dragon fight. And I follow his advice. Against the flow, I elbow my way to my destination. The Town Hall balcony is already occupied by local dignitaries peering into the arena where the spectacle is about to begin.

I have to fight my way through but manage to find a spot that will give me at least some of a view of what is about to happen. Suddenly, shots are fired. Saint George makes an appearance, trailing in his wake is a huge dragon with a tail several metres long.

When everyone’s attention is focused on the tail, it rises and turns around on its axis in the blink of an eye. Crowd surfers risk life and limb to try and bring down the tail end of the beast.

Whenever they manage to do this, a ball of dragon hair is spawned and the dragon hunters pluck hairs from the dragon’s tail. Whilst they are gloating over the catch they managed to steal from the monster, its tail is rising one again only to come down further on. The hair hunters jump up once again. No-one is spared. The crowd throws itself onto the monster, which goes with the flow, splits up and carries on regardless. Once the dragon has swung its tail in all directions, a truce is called.

The victorious knight Saint George, proudly strolls around, greets the public and finally leaves the square with the green monster trailing behind him. This is the sign for the crowd to dive into the sand to search for dragon hair.

The Car d’Or has been returned to the church and the dragon is safely back in its stable once again. So, time to kick off the party! The ‘Combat du Lumeçon’ takes place annually on the first Sunday after Pentecost. This unique and ancient ritual is part of UNESCO World Heritage. A piece of very lively history, which after so many centuries still captivates an entire city.