Orval and The Gaume - Blessed by an Angel 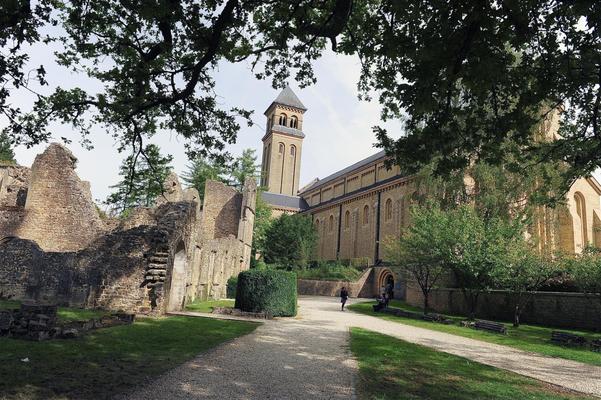 VILLERS-DEVANT-ORVAL - Orval abbey and its divine beer provide plenty of inspiration for a morning stroll. Walk with me to the Southern tip of Belgium and discover the various faces of the Gaume region. The L’Ange Gardien tavern is my ‘guardian angel’ on the approach to Orval abbey. Insiders – reluctantly - share the secret that this is the only place that serves the ‘blue’ (5.2°) as well as the lighter ‘green’ Orval (3.5°).

This would have been the ‘refectory beer’ destined to remain within the abbey walls. Such a ‘green’ beer would make a perfect pairing with an Orval cheese sandwich.

However, I also have great memories of its big brother. In a former life, after one or two adventurous treasure hunts in the middle of the night, we found lodgings in a hay barn at the local abbey.

The monk who had smuggled us in treated us to abbey bread, a chunk of Orval cheese and a hefty helping of Trappist beer. We never had a better night’s sleep.

Father Xavier, the abbey’s accountant, is giving me a brisk tour of the brewery. Whilst the bottles are rattling by at the speed of 19,000 an hour, on their way to be rinsed, filled and labelled, he confides the secret of the real Orval beer. “The entire brewing process takes nine weeks.

Orval is really only ready to drink when the wild yeast has done its job. Therefore, the bottles are laid down for five weeks to encourage the second fermentation in the bottle. Local beer lovers will then give it another half year before cracking open their ‘vieille Orval’.”

To really enjoy an Orval, it has to be at room temperature (12 to 14°C), says Brother Xavier with a smile. Orval is an amber coloured Trappist beer with a slightly bitter and rather dry character. The brew’s wild yeasts make for the typical tangy flavour.

The beer I am tasting at the moment harks back to the 1930s, yes indeed, to the previous century. At the time it was launched by German brew master Hans Pappenheimer – this is not a joke* – hence the Teutonic accents.

This beer, Trappist through and through, beautifully complements the local cuisine, a ‘Pâté Gaumais’ for example. Food lovers will appreciate it both before the meal, as an aperitif, and afterwards, as a digestif. Quality is paramount. In the lab, samples are examined under the microscope.

The brewer insists that his beer is properly served. Following a mystery shop, about 200 cafés are recognised each year as Orval Ambassadors. There you can be certain that the Trappist is poured slowly and into the right glass. According to the rulebook, the beer must be poured in one single movement in order not to disturb the deposits.

“An important element of the quality of our beer is the pure spring water used in the brewing process. By the way, this spring is associated with a fascinating legend. In the twelfth century, countess Mathilde was pondering her future as her husband, Godfried the Hunchback, had recently passed away.

An unguarded moment saw her drop her wedding ring into the source. Fervent prayers to the Holy Virgin ensued and, lo and behold, a trout jumped out of the water and returned the ring to her.

The image of the fish carrying the ring was to become the Orval insignia,” relates Father Xavier. In modern times, I am unable to pull off the same trick when exploring the old abbey ruins.

No fish are to be seen anywhere in the Mathilde source. I join the crowd of tourists hoping for a miracle. The overflow of the spring, which is covered in coins, bears witness to the visitors’ aspirations. 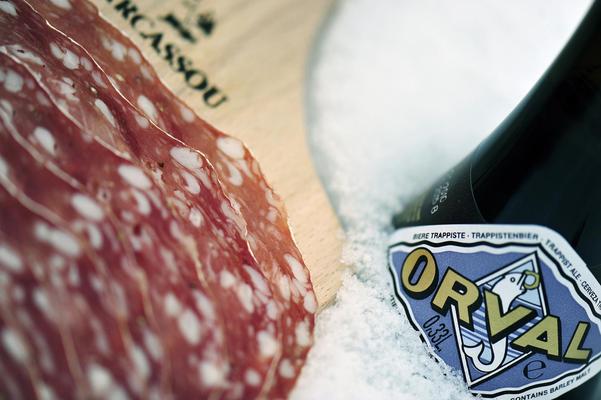 A Green and Holy Oasis

It’s time to take some fresh air. The silence is overwhelming. The monks could not have wished for a better place in which to meditate. Orval is an oasis of rest in a sea of green. The imposing abbey is surrounded by 3,000 hectares of woodland. From a previous walk, I remember my encounter with a litter of wild boar with their distinctive striped markings.

Now, I am following the unpredictable upstream course of the river Williers. You can hear a pin drop. The only sound is the babbling of the water in the background.

An hour’s walk through the forest, which is morphing into its vivid autumn colours, takes me to Chameleux. Findings from a distant past show that this region has not always been quite so isolated, as witnessed by the ruins of a Roman relay on the former military road between Reims and Trier.

This road was built to facilitate speedy troop movements. Relays were established at regular intervals so messengers could change their mounts. Each stop had its own forge and the coins discovered here attest to a lively trading past.

Having climbed a bit higher, I savour the views over Williers. This village grew around a fourth century fort, which was set up to protect its people from barbarians. It is here that the legendary horse 'Ros Beiaard' is reputed to have started its massive 1,000-metre jump across the Ruisseau de Chameleux valley.

And, if you find that story just a little hard to believe, there is also said to have been a subterranean corridor that swallowed a cow from time to time.

A last delightful view from the 358-metre summit of Mont Mollet and it is time to turn back. 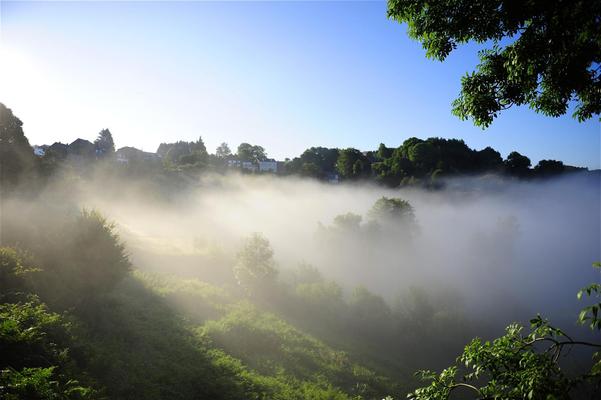 The Gaume... The Belgian Provence

After an enjoyably tasty visit to L’Ange Gardien, it’s time for a 'changement de décor'. A mere half hour’s drive takes me from the forests of the Ardennes to the plateaus of the Belgian Lorraine.

Torgny near Virton, Belgium’s southernmost village, benefits from its own mild microclimate, with the highest number of sunshine hours in the entire country. The hilly ridges of the Gaume are protecting Torgny from the chilly north-eastern winds.

The inhabitants of the Gaume are cheerful. Just like the Massilians, they wear their hearts on their sleeves. This is all to do with the sunshine and the abundance of light.

The Ardennes have a harsher climate, which explains the more inhibited character of the Ardennois. It takes a while to get to know them.

In Torgny, the golden sandstone cottages with their red roof tiles bring to mind Provence.

Traditionally the walls were plastered with a mixture of chalk and sand called chaume, which was coloured with ochre, beige and pastels to protect them from damp and frost. Nowadays, people don’t always bother with the plastering. A typical Torgny feature is the slightly protruding window and doorframes with a curved or straight lintel. I pass the “Grande fontaine” village laundry, where you used to catch up on the latest gossip whilst battering the sheets.

In local 'parlance' (speak), this place was called the “Place des Mauvaises Langues” (literally the place of bad tongues) or “Nid de Guêpes” (the wasps’ nest).

I pop into the 18th century hermit’s chapel, dedicated to Our Lady of Luxembourg and admire the painted wooden statues depicting various saints. The French Revolution, which marked the end of the old Orval abbey, was also responsible for chasing away the last hermit. In 1960, Sister Marie-Bernard took up the old hermit trail.

The landscape is dotted with crosses, or ‘calvariebergen’ (calvary mountains), usually made of limestone. Their origins hark back to prehistoric times when monuments were erected to repel evil spirits. Christianity then built on these ancient symbols to establish its own traditions.

The Raymond Mayné nature reserve can be found just above Torgny. The dry, parched, chalky grassy landscape (the truche) is host to various species of native orchid; unfortunately, I am too late to admire them in bloom as their flowering period is from April to September. The presence of crickets, praying mantises and grass snakes testifies to the mild climate.

To complete the picture, this area is also home to wine production. Torgny’s three vineyards account for a total annual yield of about 5,000 litres.

Torgny and Orval have at least one thing in common: the silence. I can hear the buzzard’s cry high above my head. My eyes are saturated by a panorama that matches the best the country has to offer. The river Chiers is pursuing its leisurely course down the bottom of the valley. And the sun is shimmering above the French horizon. 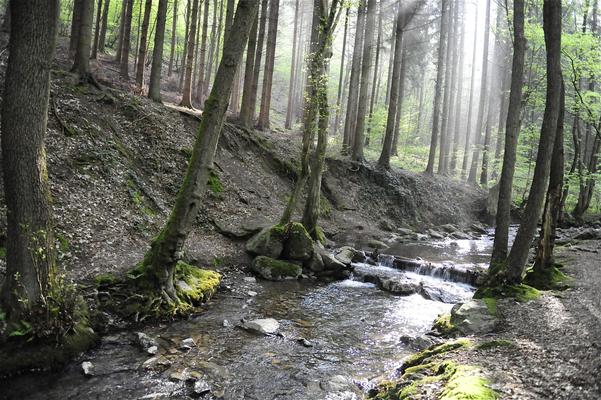 Take care not to... confuse a Trappist with an Abbey Beer

The Belgian abbeys that produce Trappist are: Achel, Orval, Scourmont (Chimay), Rochefort, Westmalle and Westvleteren. The Orval monks patented the name ‘Trappist beer’ to avoid commercial exploitation and the Trappist label was launched in 1997.

This qualification ensures that the product originates from a Trappist abbey and meets the requirements of quality and tradition originally laid down by that order. A real Trappist beer is brewed within the abbey walls. This is far removed from the so-called ‘abbey beers’ which are marketed by large breweries.

The tradition of Trappist beer harks back many centuries. The Trappist order was founded in 1098, and ever since then the monks have been applying themselves to manual labour, including the production of food (bread, cheese, beers, liqueurs...).

Most abbeys sell part of their produce, allowing them to be self-sufficient and to make a contribution to the community.

Trappist beers are heavy, high fermentation beers, which can vary greatly in terms of aroma, colour, taste and alcohol content. Their main characteristics are:

Opening hours for the ruins, museum and shop:

Brewery tours take place every afternoon in July and August. In September, they are available on Sunday afternoons only.