The Centenary Edition of the Ronde van Vlaanderen 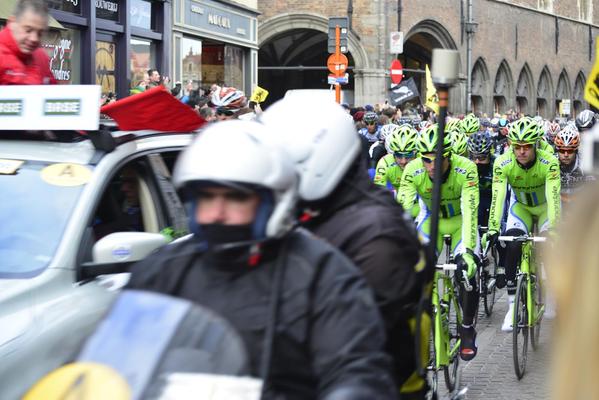 BRUGES - We can never have enough of it – the fight on two wheels with the cobblestones and inclines of the Flemish Ardennes; showered with hailstones, in the pouring rain or the biting cold. On a steep mountain climb, fired on by supporters who are fired up themselves by one or more helpings of the strong(er) stuff.

When one of the favourites suffers a fall and one of the remaining contenders, who had to bow out last year, feels he is now in with a chance, our enthusiasm is boundless.

Easter Sunday, 09.30 am, Bruges market. Helicopters are hovering over the Belfort. One by one, the champions take their turn behind the microphone on the stage.

Hero adoration is in full swing. I can hear a cacophony of languages, from the juicy Bruges dialect to Japanese. Then, the kick-off is here. The race is under way.

An army of motorbikes, auxiliary cars and 207 cyclists are getting a move on. First past the ‘lakenhal’, the old linen exchange, then across the Rozenhoedkaai bridge and suddenly, they are out of sight. Within the hour, fate strikes for ‘Tommeke’ Boonen.

He is getting too close to the wheels of a competitor, has to avoid a traffic cone and then crashes down to earth. No victory this year, and perhaps a dark cloud over most of his spring season, for which he trained so hard.

A champion’s life can be tough. When Boonen won this race last year, exuberant euphoria ensued the country.

However, health and injury issues during the winter, and being forced to abandon the Milan - San Remo race earlier this year, made it unlikely that a similar feat would be on the cards. Our national champion had simply not covered enough kilometres to stand any chance. 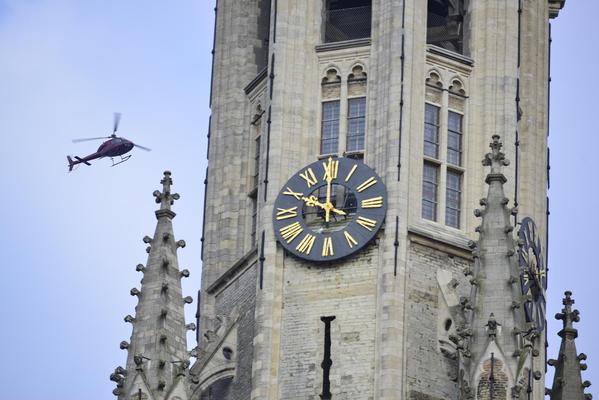 Back to the Market and back in time. I enter the Historium, a new tourist attraction housed in the former Waterhalle. The elevator takes me to the 15th century. I am equipped with the audio guide and have my headphones on.

My guide is called Jacob. He is an apprentice to the painter Jan Van Eyck and helps him paint the ‘Madonna met kanunnik Joris Van der Paele’. He is looking for Anna, a model with whom he has fallen head over heels.

A screen lets us experience Bruges harbour in days gone by. Merchants from all over Europe are docking their boats. I can hear the waves reverberating against the quays. I take a quick peep into Van Eyck’s bustling workshop.

Then, I am taking a stroll through the maze of alleys in medieval Bruges. Bells are ringing, dogs are barking, tradesmen tout their wares and carts are creaking, all of them competing to be heard.

On my way, I pass the public baths, brightly lit up and smelling of soap. When Jacob arrives at the house of the lady who makes rosaries, or paternosters, I can see snow fluttering down. Yes, in 1435 it could be cold as well. The story of Jacob and Anna is a movie with special effects that you can physically feel. The tour takes 35 minutes.

A guided tour lets you discover these locations in modern Bruges. Today, I will take a walk along the Rozenhoedkaai, den Dyver, the Gruuthuus, the begijnhof and the site of the Oud Sint-Jan hospital. I am far from alone.

Hundreds of tourists came here to see the Tour depart. Now they join the carriage parade, floating past on the reien canals or strolling across the cobblestones, cameras at the ready. I can find no trace of the red and green parrot from the movie. 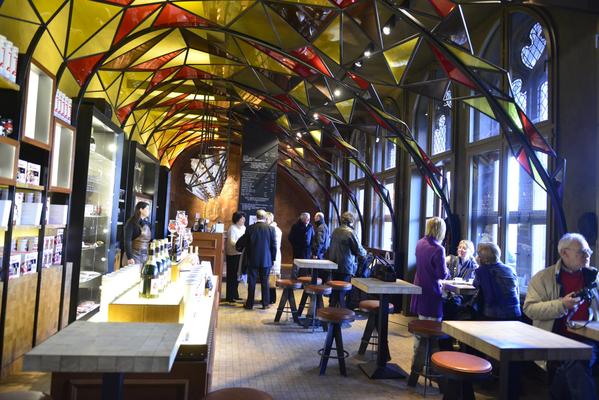 One hour later and I find myself in Oudenaarde. I have made some enquiries and find the Kwaremont, one of the ‘mountains’ of the Tour on which the riders exhaust their calves. The Flemish fair, or ‘kermis’, is in full swing. Sausages and hot dogs from the grill, beer flowing freely…

The large VIP tents are shaking with the decibels they put out. ‘Mountains’ in the flat Flemish countryside, we are not used to them.

I enjoy the view across the fields and see a hare make its escape through the stubble. In the distance appears the skyline of Oudenaarde, the finishing point of the race for some years now. Old and new are melting seamlessly.

A Roman, just escaped from one of Caesar’s legions, is studying his iPad to see how his heroes are doing in this modern-day chariot race.

Nerves are running high. Instead of trumpets to start the battle, the claxon of the broom wagon pierces your ears. Out of the way everyone, behind the crush barriers! The leading group flashes past.

They’re gone again before your know it. Not long after, the ribbon of riders snakes up the mountain, for the first of three times today. 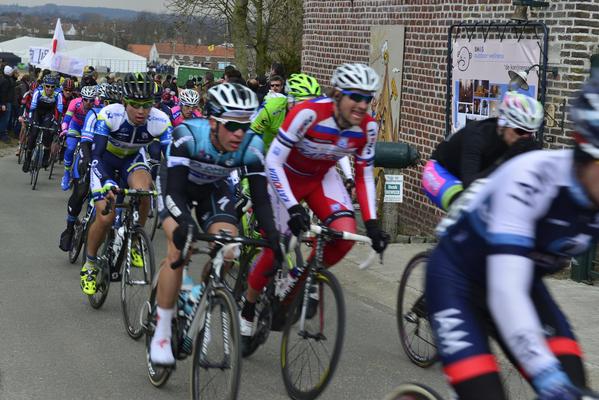 Who is it Going to be?

The newspapers have been rife with speculation for days. Who is going to be this year’s winner of the best of Flanders? In the meantime, we have learnt that Tom Boonen has had to abandon his race due to a fall.

Those in the know put their money on Cancellara, or on the newcomer Sagan, who has been surprising everyone this spring.

“Give Cancellara a 10-metre lead and you have lost him,” my son Max, aged 20, tells me. I am relying on his knowledge. Both easily and knowledgeably, he is pointing out the major contenders and dissecting all the possible race scenarios.

In the meantime, we have arrived at the little square just above the Oude Kwaremont. You could walk over people’s heads. No elbow room. On two giant screens, we follow the race's progress.

Whenever we hear the helicopter approaching, we know that they are on their way. We have to rush to see anything at all with the masses round us.

When the riders come around for the second time, I can only catch a glimpse in the safety mirror on the corner. For the third circuit, we are choosing a lower position. I am in the field and Max and his sister Lio, 15, have now climbed the trees that are overhanging the road.

There is a long stretch of cobbles. Max’s informed opinion is that the race can be decided here, during the climb. Der Fabian, as Cancellara is known, is out for revenge.

Last year, a thoughtlessly discarded drinking flask, at a water stop, landed him in hospital. But it is not only this notorious ‘bidon’ that is a thorn in the side of the Swiss champion – Peter Sagan falls into this category as well.

Sagan floored all his opponents in Gent-Wevelgem and narrowly lost the sprint in the Milan – San Remo, perhaps through an overdose of confidence.

Could this be the Achilles heel for the Slovak champion again? 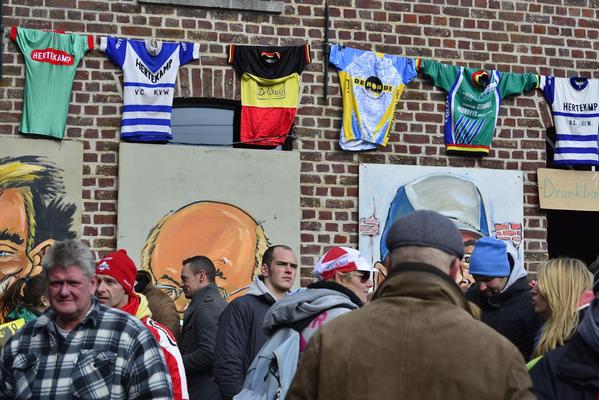 Today, the two best classic riders of their generation, Tom Boonen and Fabian Cancellara, should have fought it out between them. However, with Tom out of the race, all our sympathies go to the Swiss rider. Only Peter Sagan and Jürgen Roelandt are able to keep up.

After the 'Koppenberg' defeated half the peloton and RadioShack was in charge of the parcours (the racecourse’s profile) thanks to a reinvigorated Stijn Devolder.

The peloton is waiting… Until there is no time left. Can the Swiss overtake the Slovak sprinter Sagan? After a second attempt on the Paterberg, the answer is yes. The bird has flown. One of the fastest cyclists in history goes for the break.

In an instant, cycling is reduced to a competition where the winner is he who can pedal the fastest. There is no stopping them now. In the blink of an eye, 10 metres turn into 20 seconds, 30, 40…

Fabian Cancellara is the winner with a lead of one-and-a-half minutes. In the sprint, Peter Sagan defeats Jürgen Roelandt to take second place.

The Centenary running of the Ronde van Vlaanderen has finished. In the bars and cafés, tall stories are being told, bobbing on a sea of beer. Crush barriers disappear. The cobblestones of Kwaremont will soon be shining brightly and quietly once again. Until another peloton comes thundering past.