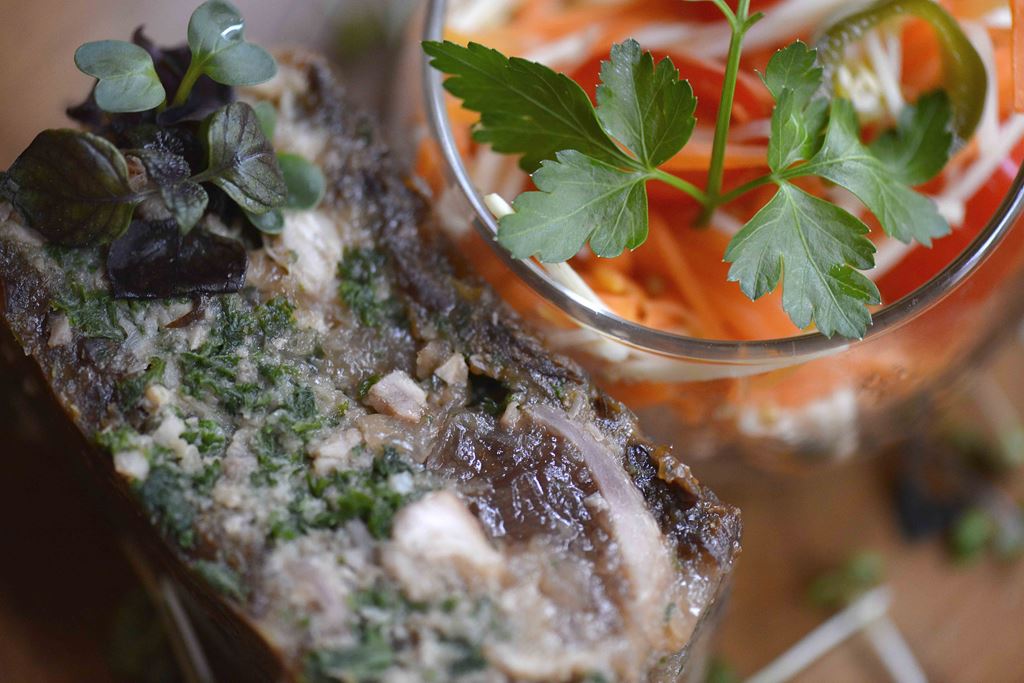 Flemish cuisine would not complete without rabbit and prunes. We breathe in the sweet aroma of prunes that have been simmering for a long time in a sauce made with a dark abbey beer or a dark Trappist.

To prepare a preskop or brawn, the meat is boiled and finely minced before being compressed. This dish can be eaten hot or cold.

The fresh-tasting, sweet and sour Liefmans Kriek Brut enhances the flavours of the tarragon and wine vinegar used in the dressing and the garnish and brings out the sweetness of the prunes.

Place the carrots, onions, celery and garlic in a casserole with the bay leaves and thyme sprigs and add four litres of water. Bring to the boil and leave on a low heat for 45 minutes, adding a little pepper and salt.

Place the rabbit in the casserole and continue to simmer. The rabbit is ready when the meat comes off the bone.

Add the Liefmans Kriek Brut and briefly bring to the boil. Season with pepper and salt.

Then add the gelatine leaves and cool down until lukewarm. Add the shredded rabbit, the prunes and the parsley and pour the mixture into a mould lined with cling film. Weigh down the mould to allow excess stock to drain away, creating a firm terrine.

Mix the ingredients for the dressing in a blender. Season with pepper and salt.

Using a vegetable peeler, turn the vegetables into beautifully fine strings. Boil the water with the vinegar, sugar and herbs for five minutes, then add the vegetables and remove from the heat. Allow to rest for at least 24 hours.

Assemble the dish and garnish.

Liefmans Kriek Brut brewed at brewery Liefmans is a welcome guest on any table. This fresh and fruity beer yields surprising aromas of morello cherries.

Fruitiness is the leitmotiv, but the Liefmans is also freshly sour beer and very quaffable. It is an excellent aperitif and pairs up nicely with this "Preskop". Thai cuisine is zesty and piquant but delicate and mild at the same time, proof of the art of the...
Read More Chocolate mousse with a Liefmans sabayon

We Belgians like to think of ourselves as real gourmets. It will come as no surprise that we are ...
Read More
ONTVANG HET LAATSTE BIERNIEUWS