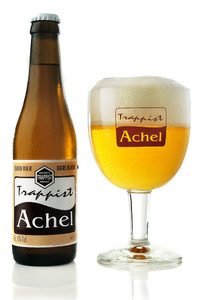 When the Trappist abbey of Achel started to withdraw from its agricultural activities, developing its brewery was seen as one way of increasing its sources of income. The monks quickly decided to bottle and sell their own beers, just as their Trappist brethren were doing.

Brother Antoine, who had previously been a brewer at the Trappist Abbey of Rochefort, moved to Achel to help develop the twin stars in the new brewery's firmament – the Achel 8 Blond and Achel 8 Bruin. This Achelse tripel-and-dubbel pairing represent the bigger, stronger brothers of the Achel family. And unlike the Achel Blond 5, which can only be tasted freshly poured within the abbey, these were beers destined for the outside world.

The Blond tripel was first launched in 2001, but it had a somewhat wobbly start. Originally it was an unfiltered beer, with yeast retained in the bottle. But this was not a hit, and the Blond evolved into a beer produced using in-bottle re-fermentation. Third time lucky, and this tripel was finally able to proudly join the elite Trappist fleet, under a silver bottle cap banner.

Just like its chestnut brother, the ‘8 Brune’, this is a good ‘starter Trappist’, one that appeals to a wide public. It is a beer completely in keeping with the sober tulip glass it is commonly poured into – and with the unfussy label that adorns its bottle. You get a clear no-nonsense taste of the basic ingredients of hop and malt, while its crowning glory is a robustly solid collar of froth.

The Achel 8 Blond is a beer of high fermentation that re-ferments in the bottle. In common with the Achel 8 Bruin, the main fermentation is done with a yeast supplied by the Van Steenberghe brewery. A dried yeast is then used for the in-bottle re-fermentation.

Under a splendid, lasting collar of crackling white froth, we see a wonderfully clear golden-blond tripel.

Naturally this is a beer best poured into its very own Achel chalice. The simplest, and most basic of tulip-shaped glasses, it is a perfect alternative for the classic, sober Achel chalice. Both Achel glasses can be purchased from quality drinks stores and beer shops. They are also easy to track down online.

This is beer with an honest, sweet, malty palate, somewhat reminiscent of bread, which is complemented by the fruity-sweet touches of young pear and banana. Low on body, It is a tender thirst quencher, with just a wisp of bitter in the finish, one that leaves the palate with a decided gentleness.

This beautiful tripel is a perfect companion for a 'croque-monsieur', or a 'cordon bleu' made with cheddar cheese and, perhaps, a simple – and not overpowering – slice of cured ham.

Can be kept for at least two years. After that period, the taste may evolve negatively. In particular the hoppy character of this beer will diminish over time. In any case this beer should be stored vertically in a cool, dry and dark space.

Achel 8 Blond is available in bottles from the abbey and its tavern, in specialist drinks stores and beer cafés, and a number of supermarkets and online beer stores. It is not as easy to get hold of as some Trappists – a Chimay or Westmalle, for example. This should not come as a surprise, once you take into account its annual volume, which is even lower than Westvleteren’s.

Achel 8 Bruin
Achel 8 Bruin first saw light one year after the Achel 8 Blond. And unlike its somewhat troubled brother tripel, this dubbel was well received from the start. It especially hit the spot just across the border, in the Netherlands ...
Facebook
Twitter
Google
Email
Pinterest
GET LATEST BEER NEWS