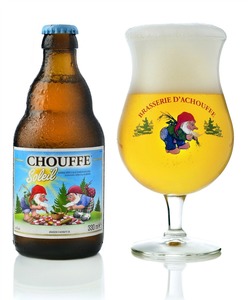 The label of the Chouffe Soleil tells you straight away what this beer is about. The brewery’s gnome mascots, known from the blonde La Chouffe beers and the dark Mc Chouffe brews, are preparing for a scrumptious picnic, bathed in the mild spring sunshine.

During the reign of winter we enjoy the dark, seasonal beer N’Ice Chouffe, but when spring arrives, Chouffe Soleil conjures sunshine in our glasses.

This new, unfiltered, blonde seasonal beer re-ferments in the bottle and is surprisingly refreshing thanks to its aromas of fruits and herbs and its zesty citrus flavour. It is a thirst-quencher with plenty of character.

Chouffe Soleil is brewed only between April and October. In fact, Chouffe Soleil has picked up the baton from Chouffe Bière du Soleil (4.5% ABV), which has vanished from the market.

That was a light, well-hopped amber beer that tasted full in the mouth and was brewed using malted barley, wheat and rye. However, this light but fully rounded beer, was ahead of its time and was soon withdrawn. Times have now changed.

Chouffe Soleil is an unfiltered, top-fermented beer that re-ferments both in the barrel and in the bottle.

Its main fermentation and storage are followed by re-fermentation through the addition of yeast and sugar prior to bottling.

Chouffe Soleil is brewed with water, yeast, Styrian Golding hops added during the boiling process, and Amarillo hops used for the dry-hopping.

Pale barley malt is also used in combination with wheat and rye malts.

Unfiltered, Chouffe Soleil is a sparkling beer, pale yellow in colour, with a slightly cloudy appearance that is topped by a cloud of pinkish froth.

6 – 10°C / 42.8 ° F – 50°F. Pour out with a steady hand, without keeping an eye on the clock, and you will achieve a beautifully frothy head. Use a dry and clean 33cl Achouffe glass for the best results. Towards the end of the pouring process, add the yeast to the glass.

The La Chouffe tulip-shaped glass (25cl or 33cl) is the drinking vessel recommended to bring out the best of the Chouffe Soleil. A 12cl tasting glass is also available. The Chouffe glass can be purchased from the brewery shop, online and from specialist beer outlets.

This sunny beer gives you an instant lift into spring. Its perfumed aromas conjure a cornucopia of flowers, citrus fruits and peppery spices.

It strikes a beautiful balance, combining the benefits of chamomile and elderflower with a hint of vanilla, paired with fruity hints of tangerine and lemon.

This freshness is enhanced by zesty hints of pepper and saffron. These scents continue to come to the fore in a non-bitter taste where exotic aromas of fruit and wood claim centre stage.

We finish on a dry, zesty note enhanced by a generous dose of citrus. All in all, this beer pours the best of the sun into your glass!

On the cheese front we can recommend an ash-covered goat’s cheese such as a Saint-Maure de Durbuy or a soft, red-veined cheese.

We can also recommend this spring beer in combination with desserts made with chocolate muffin, avocado, orange or tangerine.

Chouffe Soleil will keep for 12 months in the bottle and for 6 months on tap. Storing for up to a year after bottling will not affect the taste or the colour.

It is best stored in a dark, cool environment. Turn stored barrels upside down to encourage the yeast to blend. Bottles should be stored vertically.

Chouffe Soleil is available in 33cl bottles and also on tap (20 l). As the Brasserie d’Achouffe forms part of Duvel Moortgat this beer is easy to get hold of in Belgium.

It is stocked by supermarkets as well as specialist beer stores.

Houblon Chouffe
The Houblon Chouffe is a crossover beer – a Belgian interpretation of the India Pale Ale (IPA), a beer style originating in England. Extra hops were added to these ales, to make sure the beer survived the long sea voyage to India ...

La Chouffe
La Chouffe is Brasserie d’Achouffe's star brew. This strong blond ‘gnome beer’, first brewed in 1982, today accounts for 80 per cent of the brewery’s output. Not only did the brewers make history with this, their first Ardennes ...
Facebook
Twitter
Google
Email
Pinterest
GET LATEST BEER NEWS