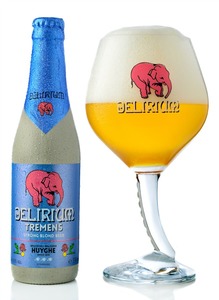 Geraardsbergsesteenweg 14B
B-9090
Melle
Belgium

The Delirium Tremens was born in 1988 at the request of an Italian client. This beer is an outsider. Its white bottle is reminiscent of Cologne pottery ware.

On the label you will see pink elephants, crocodiles and dragons depicting the various stages of inebriation you might expect to go through after a few glasses. The name was invented by a tax inspector, of all people, as he became aware of slowly-approaching intoxication. Delirium Tremens hits the spot as far as many beer lovers are concerned. Its production alone represents almost a third of the brewery’s total volume.

Delirium Tremens is a heavy blond beer of the tripel type and it re-ferments in the bottle. Interestingly, three different types of yeast are used in its production.

Since its launch, the Delirium family has grown, and now includes the dark Delirium Nocturnum, the seasonal Delirium Christmas, the Delirium Red fruit beer and Deliria, aimed at a female clientele.

The beer gained international fame thanks to the popular Delirium specialty beer cafés. The first one was set up in Brussels and you can now find them all over the world, as far away as Sao Paolo in Brazil.

The beer is a pale blond in the glass with a slight cloudy haze produced by the re-fermentation.

It will continue to bubble in the glass and, if served correctly in the proper Delirium vessel, will develop a beautifully delicate head of froth.

Like most Belgian beers Delirium Tremens should ideally be drunk from its own, elegant degustation glass on a tall stem. The pink elephants and dancing letters of the beer’s bottle lend a touch of gaiety to the branded glass too.

Taste this tripel and you’ll be surprised by malty aromas and fruity touches of orange zest, green apples and apricots with a hint of banana.

As you drink a glow of alcohol warms your tongue and palate. Delirium Tremens tastes full in the mouth with plenty of body and a long finish of dry bitters.

This versatile tripel is great to pair up with a cheese board, especially with stronger cheeses, such as as the blue veined Belgian cheese "Achelse Blauwe" or "Grevenbroecker".

The official Huyghe website offers several recipes which either use, or are paired with their beers, including Delirium Tremens.

This is not a beer that was brewed to be laid down and kept. It should be enjoyed while it is young.

The beer will keep in the bottle for 36 months and, on tap, for 12 months. Always store the bottles vertically in a cool, dark and dry environment.

You will find this beer everywhere in Belgium and far beyond. After all, Brouwerij Huyghe exports Delirium Tremens to all corners of the earth. You should have no problems whatsoever in getting hold of this beer.