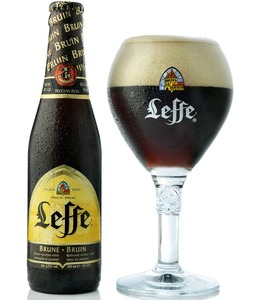 This dark Leffe has its roots in the Middle Ages. The Premonstratensian monks (an order founded in France in the 12th century) of the Abbey of Leffe in Dinant, urged the population to drink beer instead of contaminated water.

After all, to make beer you boil the water, sterilising it in the process. The monks produced a brown beer for the numerous pilgrims who visited their abbey and continued to do so for centuries.

Leffe Brune is a dark abbey beer of the dubbel type. The roasted malt used is the base note of the flavour, responsible for the slightly sweet taste of caramel. The finish is zesty and dry.

The dubbel – literally ‘double’ in English - refers to the quantity of malt used. Dubbels tend to be sweet at the start with touches of dried fruits, giving way to a dry and slightly bitter finish.

The dubbel was born in abbey breweries but the name is now used as generic term for a strong brown beer.

The beer takes on a dark brown colour in the glass, covered by a robust head of froth with the colour of café crème.

The Leffe beers are served in an elegantly engraved chalice on a tall stem. The glass’ bowl allows the aromas to come to the fore perfactly. The letter ‘L’, etched at the bottom of the glass, ensures a continuous production of bubbles that means the head remains intact for longer.

The roasted malt lends the beer a slightly bitter taste with touches of candi sugar, caramel, coffee and chocolate.

This full-mouthed and fruity beer finishes on a zesty and dry note.

Leffe Brune will keep in the bottle for two years and can be stored in the barrel for 12 months.

Store in a cool and dark place at a temperature of between 10°C and 15°C.

The Leffe beer range is brewed, distributed and exported by AB Inbev, the world's largest brewing company; you will find it no surprise then that Leffe Brune is readily available in most countries.