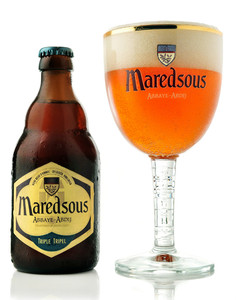 As far as the monks of Maredsous are concerned, the Maredsous Tripel is a party beer, their ‘nec plus ultra’. This tripel is a tipple that is imbibed on special occasions, standing out thanks to both its intense colour and taste. The in-bottle re-fermentation is largely responsible for the latter, but this high fermentation beer owes its bright amber colour to the use of special caramel malts, without the addition of any coloured sugars.

The complex bouquet immediately grabs you, thanks to its fruity aromas, with touches of banana and zesty orange, alcohol, touches of raisins and other dried fruit. All of this is enriched with a hint of caramel from the caramel malt, which gives a taste not unlike that of sweet syrup.

The fruity esters of banana and orange are typical of the yeast used. The Maredsous Tripel could be said to melt in the mouth, but it yields a slight bitterness in the background. In the finish, the alcohol present in the beer will give a pleasantly warm feeling. A complex, rich degustation beer with a fully-rounded taste that loves to linger.

Maredsous Tripel is amber-coloured with a rich white collar, showing plenty of tiny bubbles. Pour slowly and steadily into a clean and dry Maredsous chalice. The yeast can be consumed separately if desired but is not poured into the glass.

All Maredsous beers have their own specially designed chalice-shaped glass, typical for all abbey and Trappist beers.

Maredsous Tripel is malty with a hint of caramel. Its sour, sweet and bitter tastes are blended beautifully. Clearly high in alcohol, slightly fruity, full in the mouth, and subtly bitter.

This tripel also loves a good dessert. For example, it is a perfect fit with a tarte tatin (an upside-down apple pie), and will match the sourness of the apples with the caramel contributed by the sugar. Other successful combinations include desserts with cinnamon or banana, or any soft cheese with a mild, non-overpowering taste.

The beer can be stored in the bottle for 36 months, and for nine months in the barrel. Up to three years after bottling, the taste and colour will remain unchanged

It goes without saying that the Maredsous beers can be tasted and purchased during a brewery visit. The Maredsous Tripel 10° is available in 33cl and 75cl bottles and on tap (20l and 50l).

The beer will be easy to get hold of in the more specialised Belgian cafés or supermarkets. Thanks to Duvel Moortgat’s export activities, it is readily available far beyond Belgium’s borders.

Maredsous Blond
This golden-hued abbey beer could be considered as one of the most traditional of Belgian beers. It has a pedigree that stretches back to before the French Revolution. During that time, many Belgian abbeys ceased to exist, and th ...

Maredsous Bruin
Belgium is justly proud of its ancient monastic tradition, one that goes back centuries. The French Revolution (1789-1799) wiped many abbey communities off the map. A number of these, however, were re-established in the 19th cent ...
Facebook
Twitter
Google
Email
Pinterest
GET LATEST BEER NEWS