Antwerp: A Market for Everyone 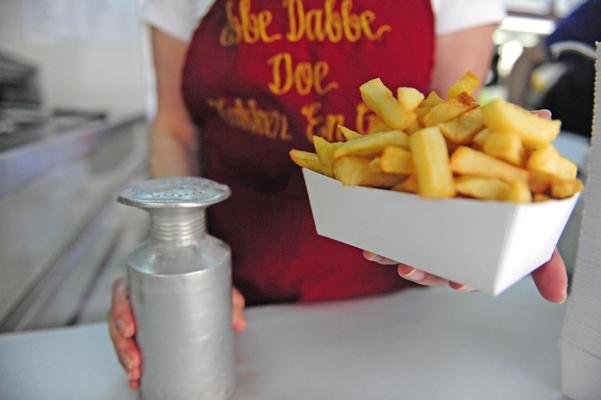 In the heart of Antwerp, street names testify to a rich history of markets in the city. However, if you visit the ‘Schoenmarkt’ or ‘Eiermarkt’, don’t expect a sea of stalls selling shoes or eggs.

The place to be nowadays is the 'Vogelmarkt!. Make an appointment on Sunday morning at the Oude Vaartplaats, or on Saturdays for those in the know.

The ancient name of the 'Groenplaats' is 'Groenkerkhof'. The square used to be surrounded by markets and a handful of flower stalls in the shadow of the cathedral remind us of the flower sellers who used to sell here. Nearby you would find interesting markets like the 'Schoenmarkt', 'Oude Koornmarkt', 'Grote Markt', 'Handschoenmarkt', 'Lijnwaadmarkt', 'Melkmarkt' en 'Eiermarkt'.

These sold, and were named for, shoes, grain, gloves, linen, milk and eggs; the 'Grote Markt' was the main general market.

Nowadays, none of these lively markets remain except for a few stalls selling flowers, nuts and dried fruits on the 'Groenplaats'. Market stalls disappeared from the other squares a long time ago.

Long gone are the days when the 'Grote Markt' saw a lively daily trade in food and household goods. During the twentieth century, the local city centre markets gradually disappeared. Nowadays, market life centres around the 'Oude Vaartplaats'.

As a child, holding my Dad’s hand, my ears were tuned to the call of ‘nie warm nie wille!’ the signal that paper cones filled with burning hot ‘smoutebollen’ and covered in a thick layer of icing sugar were up for grabs. After the ‘smosfest’ I use to lick my fingers greedily and wipe them on anything that came to hand, preferably my own shirtsleeves.

I was entranced by the great bunches of balloons – especially the black ones – and the stalls at the market’s entrance where you could buy tin bears which beat their drums when you wound up their keys.

There were always toy cars, which kept going until the lever reset itself and a helicopter that was forever doomed to hover in circles.

Of course, there were real puppies and kittens too, giving rise to the never-ending question: ‘may I have one?’ which always received a resolute ‘njet’, cruelly putting paid to any illusions.

Nowadays, the ‘Vogeltjesmarkt’ has grown into an iconic tourist destination with more than a hint of nostalgia. The market has become famous thanks to the exuberant cries of the stallholders, the 'Emperor of the Vogelmarkt', the cough sweets from Zwarte Jef, the strongman feats of wrestler-acrobat Poseke Soep and the stallholders’ songs.

The Antwerp comedian and singer Jaak De Vogt (1911-1977) had a unique talent for describing the throngs that use to descend on the market. 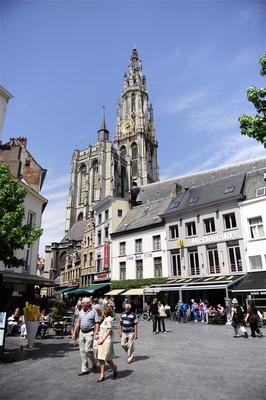 Why the name ‘Vogelmarkt’? It means bird market and according to the well-known city guide, the late Georges Van Cauwenbergh, as far back as the sixteenth century the market sold ducks, geese, snipes, partridges, herons, capons and song birds or small birds for the table.

So you went to the bird market just as you would visit the Vleeshuis for your meat and get your fish at the fish market near the 'Steen'. The market also sold game such as hare and rabbit.

Nowadays, the stallholders touting their wares are keep the colourful character of the market alive. These natural born sellers draw the crowds to their stalls and advertise their wares using a rich language heavily laced with humour.

The year 1951 saw the election of the first ‘Emperor of the Vogelmarkt’. This is a contest between stallholders which runs over two Sundays in front of a jury, who award their scores only after careful deliberation.

The stall has to look attractive, the stallholder must have a ready sales patter; able to grab an audience and keep them listening, never be lost for words, deal with hecklers and have a sense of humour. 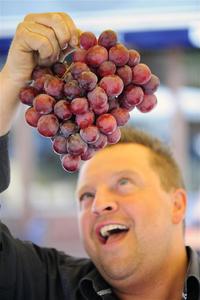 On Saturdays, the culinary delicacies in Oude Vaartplaats take centre stage. Greek stallholders are advertising their feta, moussaka and olives. Panagora Tsagaris surprises his customers with a tastily decorated feta tower and a wide range of Italian, Spanish and Greek cheeses. At 'Morocco Nuts' I encounter a sea of nuts, dried fruits and olives as well as peppers, aubergines, courgettes, tomatoes and fresh mint.

'Les Petits Bonheurs' tickles the taste buds with freshly baked bread, home-made quiche, cakes and pastries. In between the stalls, oysters are served and bottles of cava or champagne are cracked open.

The Saturday market would not be the same without 'De Polle'. “It all started in 1979 with a smallholding in Westmalle where we grew organic vegetables”, he explains. “At the time we also had some chickens, sheep plus Marie, our first goat, who soon got company. Our home-made goat’s cheeses sold like hot cakes. We then switched to cheese making with about thirty goats.

The cheeses were an immediate success at the Saturday market and with the cheese and health food shops.'De Polle' swapped his Westmalle smallholding for a larger farm in Lichtaart and the cheese maker-market vendor now has 230 milk goats. In summer they graze outdoors and winter sees them stabled. “We milk our animals twice a day,” Polle explains. The milk - both raw and pasteurised - is used for various types of cheeses.

Polle’s neighbor "Pastaman', Stijn Jasperse from Kapellen, can look back on a 16-year career at the Saturday market selling home-made pasta. The idea came from his sister’s Italian past. Pasta filled with hazelnut, walnut, sun dried tomatoes, fungi…. .Stijn loves to prepare all of these.

Some years ago, Wes Meurrens decided to start up a waffle stall. Armed with his Nan’s recipe he launched his baking career and can still be found at the Saturday market. His waffles with fragrant speculaas and peperkoek spices are unique. Buy some of Stijn’s freshly baked little jewels and you’re likely to find your way back to his stall the following week. 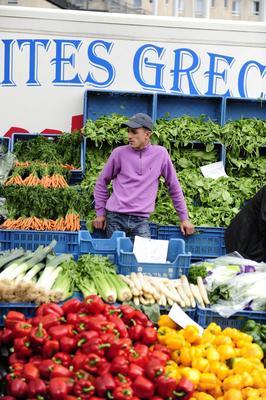 Average mortals go to the city for their markets, but food trade professionals make their way before the crack of dawn to the 'Vroegmarkt' on the Kiel for fresh fish, vegetables, fruit, fish, cheese, etc.

The fish traders who used to liven up the Riemstraat have now decamped to the 'Vroegmarkt'. Now you know where most of the delicacies in the shops and restaurants come from. Just so you know, the 'Vroegmarkt' is only open to buyers from the food trade.

Food On The Go

Arguments about the best way to fry are fought out at the counter; pita shops have their dedicated fans as well as avid haters. Hamburgers, ‘karakollen’ (sea snails in bouillon), waffles, pancakes and ice cream – we love them all. Crispy, well fried, tender and creamy? Who am I to judge?

One thing is certain, Antwerp has a wide range of yummy options to satisfy your appetite, whether you’re seriously hungry or just have a case of the munchies.

'Mama’s Garden' is a regular haunt in ‘Pita Street’, offering a great choice of vegetarian snacks. ‘Ideal after a night out’, is a typical customer comment. There’s not much to say about the service.

Empty plates are replaced with full ones swiftly and quietly and staff only speak ‘if absolutely necessary’. The loud music may make it difficult to have a conversation so eat and leave. 'Mama’s Garden' can be found at Oude Koornmarkt 41-43.

'Frituur Number One', (Hoogstraat 1) - just off 'Grote Markt', is legendary. In 2006 the building burned, but don’t be sad, the chippy has risen from the ashes. The formula is well-known: ‘one with…..’.

There aren't many surprises on this menu. The great advantage of this outfit is that it is always open, 365 days-a-year, as soon as the fat is hot every night owl’s hunger can be stilled.

There’s a handful of friets staff serving: "Het is ne grote of ne kleine" (a small or a big one). Don’t ask to have your sauce in a separate pot, it’s either on the fries or it isn’t, and make a space for the next customer as soon as you can.

Fritkot Max (Groenplaats 12) - is where to go for superb fries from a paper cone and the Frituurmeuseum is upstairs. 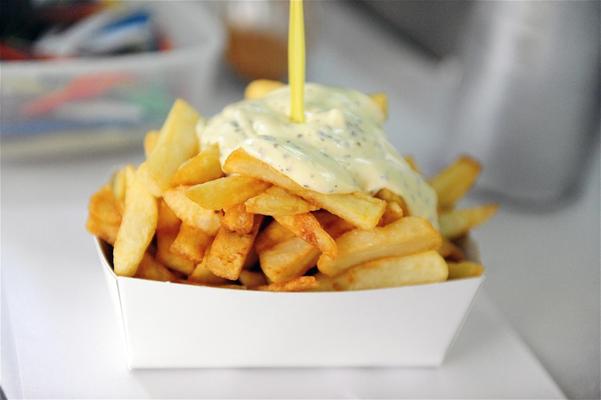 Désiré de Lille (Schrijnwerkersstraat 14-18) is an Antwerp landmark with its roots in northern France and always puts in an appearance at the annual Sinksenfoor, the city’s great carnival. However, these days you can gorge yourself all the year around on beignets, smoutebollen, ice cream, lacquemant and other waffles at their gastronomic palace in Schrijnwerkersstraat. Over a century ago, Désiré Smidts started out as an apprentice at Patisserie Lacquemant in Lille.

He put a dough ball in the waffle iron and the flat Lacquemant was born. To liven things up, a dark candy syrup was added. The syrupy, galette-style waffle is now a firm fairground favourite.

Désiré Smidts was extremely proud of his newly invented waffles, so much so that he carried on baking them at home during both world wars and also sold them cold to cafés.

Today, Grandson Marc Stoffels jealously guards the recipe. The heavy waffle irons are turned regularly as the pancake dough is poured onto the sizzling plates. I never knew that one waffle could support so much fruit and whipped cream. 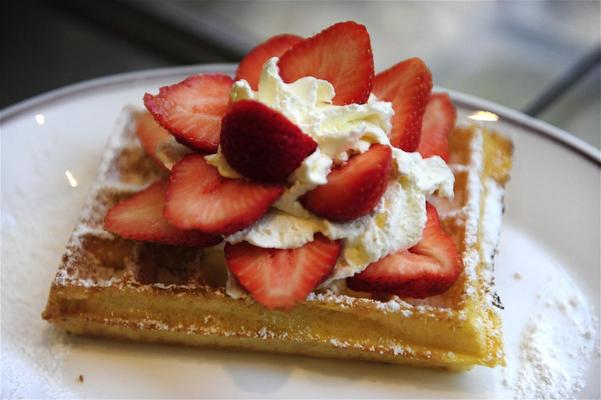 In early June, the annual Sinksenfoor takes over the cobbled areas at Vlaamse and Waalse kaai. The biggest annual fair in the city lasts five to six weeks. Around 150 fairground attractions vie for the attention, and wallet, of the visitor. The giant Ferris wheel lights up the skyline of ‘’t stad’. Neon lights go on and off.

Bursts of laughter compete with spine-chilling screams. Some riders on the Crazy Caterpillar look a bit green when they get out. There’s music everywhere, howling sirens, hits, German schlagers on the organ at the merry-go-round.

“Roulez, roulez, jouez…!” is the typical cry of the fairground stalls. Once again, you can win fabulous prizes in the land of cuddly toys. Knock over the balls, shoot, experience centrifugal forces in the Gravitron, admire yourself sporting an outsize head or a shrunken body in the Palace of Mirrors, then get lost in the labyrinth or disappear on the Ghost Ride.

Title fights at the wrestling stall are now consigned to the past, but we’re still tempted by the Chamber of Horrors and the lady with her crystal ball still promises a bright future. In the meantime, you can pick up a tasty snack anywhere. Fries, pitas, kebabs, hamburgers, smoutebollen that stick to your fingers, waffles shimmering with syrup or covered in a carpet of whipped cream.

If you are taking children, set out the rules beforehand as there is nothing so frustrating as the sense that you haven’t been able to do everything or the chance to taste it all’. 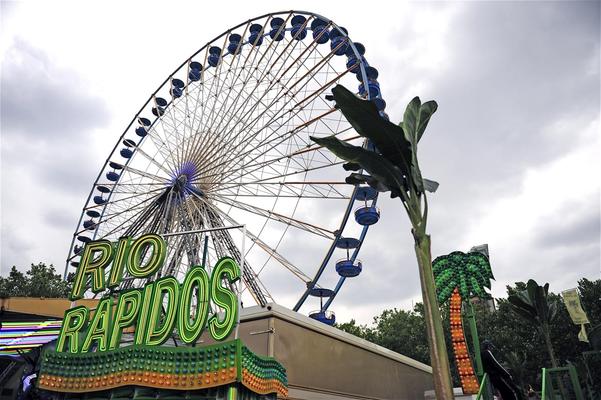 Bakkerij Goossens (1884) is a landmark with queues that always reach outside the door. Is this due to the small size of the shop, or to the quality of its sturdy ‘roggeverdommeke’ currant bread and its delicious coffee cakes? We opt for the latter. Location: Korte Gasthuisstraat 31, tel. +32 (0) 3 226 07 91

Burie makes chocolate to melt your heart. Diamonds in dark or milk chocolate? Big slabs to share, or an edible cathedral? These chocolatiers can do it all. Location: Korte Gasthuisstraat 3, tel. +32 (0) 3 232 36 88, www.chocolatier-burie.be

From Hamburger to Karakol

Can we ever give a definitive judgment? Each frituur claims to serve the best hamburger. Some of us have switched allegiance to the well-known chains. Some of us hate the karakol with a vengeance whereas aficionados can never get enough.

Make up your own mind, both delicacies can be found in abundance on the streets of ‘cake city’, in the markets and the fairgrounds.