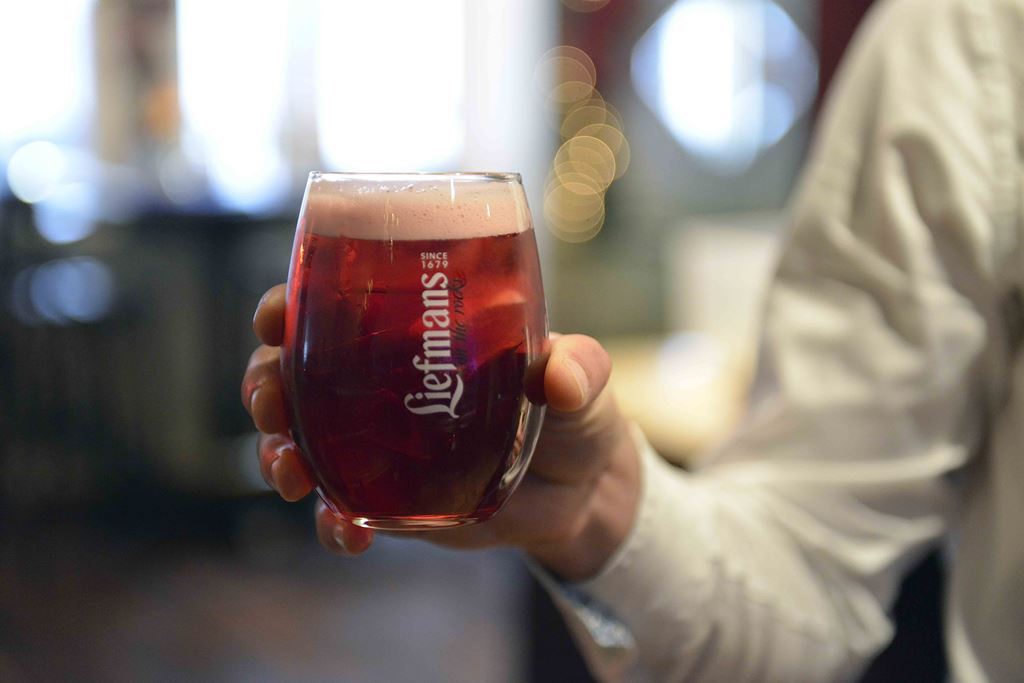 OUDENAARDE - Not many breweries can claim a history that goes all the way back to 1679. Liefmans, known for its traditional Oudenaarde dark beers, can with some justification be called a beer monument.

The Liefmans brewery tours have been re-vamped. You will follow the trail of the brewing process as it has been carried out throughout history, from the brewing hall, the cooling down, the main fermentation to the open basins.

You will see the maturation and souring of the beer, the fermentation of the cherries steeped in the ‘kriekentank’ for the Liefmans Fruitesse and Kriek Brut (formerly Cuvée Brut) and the laying down of the bottled Liefmans Goudenband in the cellars.

Your visit will conclude with a tasting in the brewery café.

Guided tours take approximately two hours. The areas that form part of the tour have been spruced up but the general tour programme has largely remained the same.

Tours are held from Monday to Saturday at 10:00, 14:00 and 17:00; visits can be arranged for groups of between 15 and 35 people. The brewery also offers a multi-function hall where events that include catering can be held. 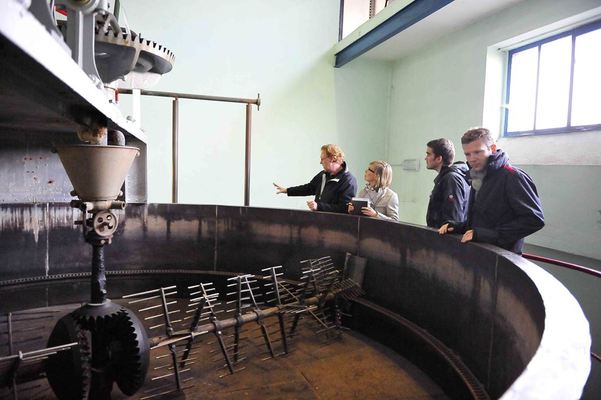 Brewmasters Rosa Merckx (former) and Marc Coesens (current) were responsible for fine-tuning the taste of the lactic-acidic Liefmans beers, which are now fuller and rounder. These days Duvel Moortgat supplies the wort that is pumped into open cooling basins made from copper.

The house yeast is then added to the wort. At the fermentation stage the beer will ingest the lactic acid bacteria that are present in the environment.

Once the beer has finished fermenting it will spend months maturing and souring in sealed tanks.

Many tasting sessions result in the perfect blend for Liefmans Oudbruin as well as the Goudenband beer, which is ideal to store, and the ideal Liefmans Fruitesse and Kriek Brut, both of which contain krieken cherries matured in the sour beer.

The wall next to the preserved mashing basins provides a clear diagram of the entire production process.

In the next hall you can view the large boiling kettles, square-shaped, in which the wort and the hops were combined and brought to the boil. Part of the beer’s clearing process used to take part in the cooling basins. Many impurities present in the wort were filtered out during the cooling stage by pumping the wort across over a mesh filter.

This is where the yeast was mixed in with the partly clarified wort.

Dead yeast cells and remaining impurities were allowed to sink to the bottom, a procedure that used to take a number of hours.

At the start of fermentation, the already fermenting beer was pumped across to the yeast basin.

In earlier days, the beer was cooled down initially in the ‘koelschip’ basin (from 100°C to 60°C), followed by a further cool-down using copper Baudelot, eventually going down to a temperature of 23°C; the wort was pumped across the pipes with cold water.

Nowadays, a centrifuge is used to achieve the same result. 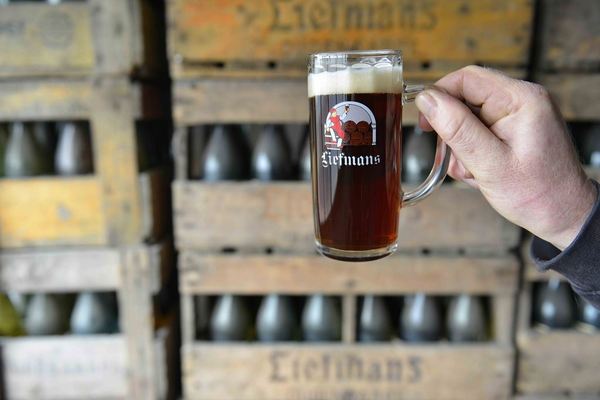 Finally, in the yeast room, we swap the past for the present.This is where the wort spends one week in large, shallow, copper yeast basins.

As part of the fermentation process the lactic acid bacteria that are present in the environment will latch on to the yeast cells, souring the beer as it matures.

“Liefmans beers can only be made at Liefmans. The air around the brewery is saturated with bacteria and wild yeasts".

This is the firm opinion of Rosa Merckx and who am I to disagree with Belgian beer icon.

During our visit we gain an insight into the brewing process and the technique of cutting (blending), characteristic of these blended beers.

We also get the opportunity to admire a wide range of brewing equipment, from filters to vintage bottling machinery, as well as ancient beer crates, lab equipment and historic beer advertising signs.

An audio-visual montage on the topic of malt makes it seem that arms emerge from the walls; hands appear that grip jute bags full of malt, ready to fill up the mashing basin. 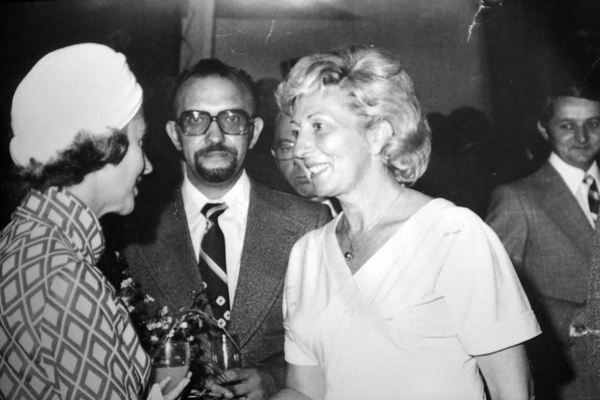 We take time out to admire a wall displaying the highlights of this brewery’s history, showing Rosa Merckx greeting cycling god Eddy Merckx, her meeting with the late Queen Fabiola, brewer Elfried appraising that year’s harvest of krieken cherries, Marc Coesens taking a break in the company of Rosa …

Every hall is steeped in a different atmosphere and from time to time I am surprised and delighted by a clever pun.

In the stair hall the Liefmans bottle lamps appear to fall from the sky like bombs.

We are walking through a hall with built-in tanks where the cherries are maturing, steeped in beer.

At this point our guide Hector explains that the freshly picked Gorsem krieken cherries from Gingelom near Sint-Truiden are stripped of their stems and leaves – but not their stones – before being washed and added to the beer.

Once added they will spend between six months and a year in the beer.

We are now on our way to the ‘caveau’s’, or cellars, where bottles of Liefmans Goudenband of previous vintages are laid down.

“This beer stores well, provided it has been brewed and bottled correctly and that the bottle is sealed perfectly,” finds Marc Coesens. “Here in the cellars there is a consistent temperature and humidity; furthermore, it is always dark. Ideal.”

So what will keep better, a small or a large bottle? “The larger, the better,” is Marc’s response.

“The proportion of oxygen in the bottle decreases with the size of the bottle.”

After our interesting and thoroughly enjoyable visit we only have one thing left to desire: a Liefmans beer tasting.

All this beer talk makes you thirsty. So, what better way to finish this brewery visit than to taste the beers in the cosy brewery café close to the source? Fortunately we have brought a designated driver so we can taste all four of the Liefmans brews... 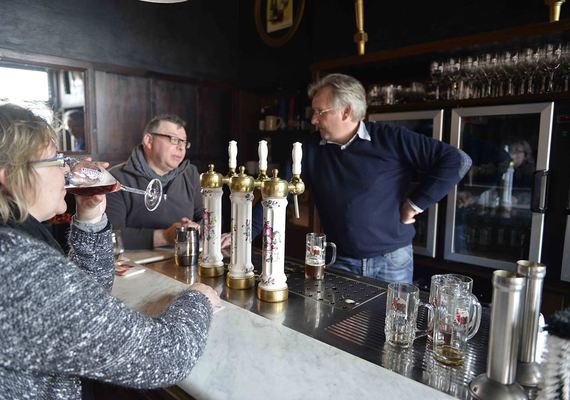 For further information on catering possibilities at Liefmans: natacha@coeurcatering.be