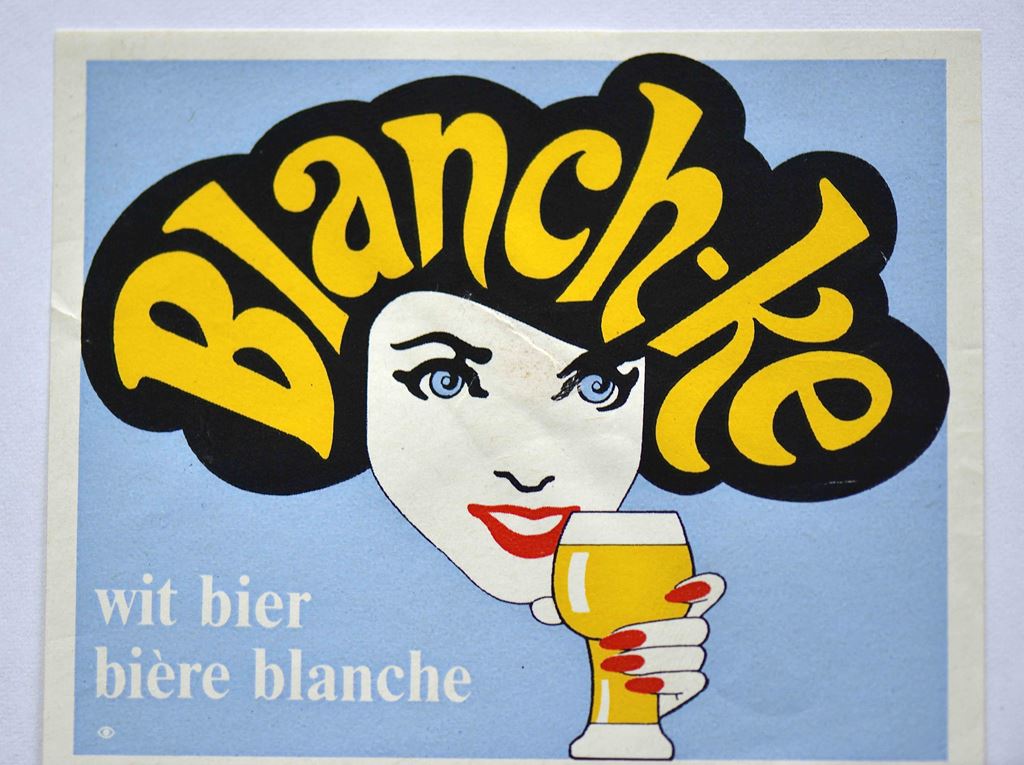 How can brewers market their beer? With an exciting campaign using poster advertising in the street, on the small screen, even on giant billboards in Times Square in the heart of New York, provided there is a generous advertising budget.

The feet of most Belgian brewers, however, are kept firmly planted on the ground. Only the larger players have marketing departments.

And they must be careful with brand images that, in many cases, have been established for many years and carefully nurtured ever since.

Many family-owned breweries, especially the 22 members of the Belgian Family Brewers, like to celebrate and honour established traditions.

It takes a lot of skill to find the right balance. How do you rejuvenate a classic beer without denying its roots? Liefmans continues to offer its Cuvée Brut and Goudenband in their beautiful silky wrapping, but has also launched the trendy Fruitesse, served on ice in cocktail glasses.

Talk to The Locals 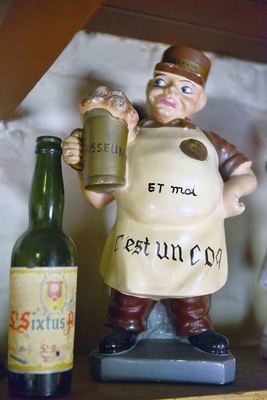 Anything that comes from our local area is familiar and so we are more likely to empathise with it. If you want to use local roots in your marketing, dialect names are the way to go. Den Tseut, made by the eponymous Belgian microbrewery, refers to the word for a female pig in the dialect of Oosteeklo, a village that happens to be a centre of pig rearing.

Den Toeteler is a white beer based on elderflower, or toeteler in the local dialect.

Regional language is also strongly present in the world of Belgian beer from the Brussels region. You should know that the Brussels dialect is a really rather juicy mixture of Flemish and French.

Some adverts produced by Belle-Vue, Lindemans or Cantillon sound quite exotic even to Belgian ears. Cantillon’s Zwanze Day is now well known internationally.

But 'zwanzen' really means ‘chatting’ – or, on a less positive note, it could mean ‘talking rubbish’. In other words, don’t take yourself too seriously.

These roots also show in a strong use of local symbols by brewers. Brabant, the home of Palm Belgian Craft Brewers, is also where the Brabant heavy horse comes from. The brewery backs the preservation of this traditional breed, setting up its own stud farm. 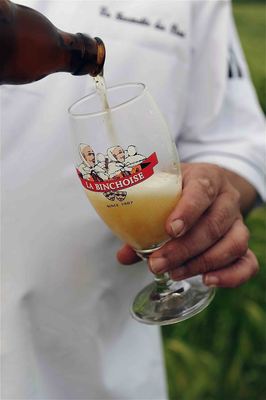 Folklore is also a fertile source of inspiration for the brewers. Large popular fairs - such as the Ducasses of Ath or Bergen (Mons), where it is called the Doudou – are accompanied by rivers of beer. The annual carnival, held in many Belgian towns and villages every year, is THE occasion to be let off the leash for a few days.

The carnaval staged by the village of Binche is now recognised as Masterpiece of the Oral and Intangible Heritage of Humanity by UNESCO.

Feasting goes on for three days and, on the final day, around 1,000 performers known as Gilles parade through the town.

Their feet clad in clogs, wearing a suit adorned with badges and insignia, and topped by a voluminous collar and a large white hat sometimes made out of feathers, these characters make an impressive sight. You are only allowed to become a Gille if you are native to Binche.

If you want to take part in the parade, you need to join one of several local associations. One of the rituals of the celebration is a visit to your local bar - all this parading makes you thirsty. To refuel, look no further than the La Binchoise brewery. Their blonde, La Binchoise, has acquired the status of carnaval beer. Unsurprisingly, it was brewed by a true-born Binchois, who takes his part as a Gille during the parade.

Brasserie des Légendes – what’s in a name? – has also taken up the folklore baton. This brewery produces the Quintine witches’ beer from its site in the witches’ village of Ellezelles.

Here, local witches were once burnt at the stake and a witches’ festival is held every year.

The ‘giant city’ of Ath – giants are the stars of their Ducasse – is the Belgian home of Goliath. Gouyasse, as the biblical giant is called in Belgium, is celebrated in the name of a popular beer produced by Brasserie des Légendes in the city. 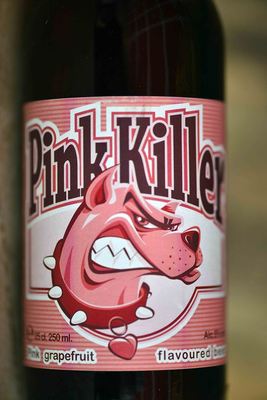 Happiness is contagious. Have a good glass of beer and you’re on the highway to joy, or so the advertising tells us. There are nothing but happy, smiley people in the local café, pint in hand.

Advertisers can try to capture these moments by staging them to perfection or just by trusting to luck, and the chance to get a shot of a beer drinker’s lips crowned by a faint moustache of froth. Either way, humour will always have a place in beer marketing.

The inhabitants of Mechelen are nicknamed maneblussers (moon extinguishers). One fine night, when the moon lit up the sky, one Mechelaar climbed a ladder, bucket of water in hand, to extinguish the fire. The Anker brewery was inspired by this local legend to create its Maneblusser beer.

The one and only steam brewery in Belgium, Brasserie à Vapeur in Pipaix, uses authentic steam machinery dating back to the 19th century.

The Pink Killer, made by Brasserie de Silly, is symbolised by an aggressive pink dog baring its teeth. A striking emblem, but should you really be afraid of a pink dog?

Brasserie d’Achouffe has created an entire world populated by gnomes. The cute La Chouffe gnomes have been adorning these beers’ labels ever since.

Visit the brewery and two life-sized wooden gnomes will point out the way. Plenty of visitors make their way home proudly sporting a gnome hat.

These hats often pop up at beer festivals, where you will also see the multi-coloured fool’s cap associated with De Brugse Zot brewed by De Halve Maan, and the pink elephant headgear of the Huyghe brewery’s Delirium Tremens. 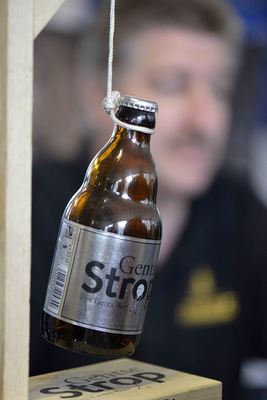 Good stories work wonders. After all, that’s why you go to the pub. At the bar, each tall story outgrows the previous one and entire worlds are re-invented. Myth or reality, what does it matter? Caulier brews the full-moon beer, Paix-Dieu Pleine Lune, named after the former Cistercian abbey with brewery attached.

This beer tells of a life lived by the rhythm of prayer and work on the land, in tune with the natural cycles.

The Paix Dieu Pleine Lune is said to be the first beer in the world brewed under a full moon. Its magic is reinforced by the beer’s unique, slightly crenellated, moon-shaped glass.

Grimbergen beers hark back to the turbulent history of the abbey that originally produced them.

It was burnt to the ground several times but always rose from the ashes. There’s enough material there to write a thriller about the Phoenix.

The Roman brewery produces Gentse Strop, named after the noose that was put around the necks of rebellious citizens who opposed the reign of the Emperor Charles V.

Rebellion has also served as the inspiration for the Brigand tripel made by Van Honsebrouck. Its name refers to the rebellious peasants of Ingelmunster who, in 1798, revolted against the sans culottes (French revolutionary soldiers) in nearby Hulste. 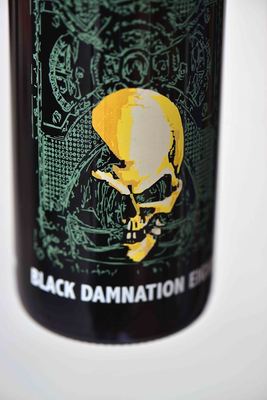 The new generation of microbreweries is especially adept at carving out a niche, making beers that fall outside the general pattern of taste and beer style. International influences often play a role; examples include the IPA beers (India Pale Ale) that are very popular in the USA.

This idiosyncratic approach shows up in witty name-giving and also gives oomph to the lively labels. These beers with attitude are quick to establish a life all of their own, both in the virtual, and real world.

The Zennebrouwers from Brussels pour their hoppy Zinnebir and Tarras Boulba into bottles that are a pastiche of the old Soviet style.

Oerbier (meaning original), Arabier and Dulle Teve (meaning Mad Bitch, a name that the American Government didn’t like) are not your run-of-the-mill beer names. De Dolle Brouwers brewer, Kris Herteleer, is responsible for the label designs of his quirky beers.

At Alvinne’s, it is not only the beers that fire the imagination. Our senses are stimulated by names such as Undressed Monbazillac Barrel Aged, and Naked Ladies.

Struise Brouwers find their inspiration in contemporary graphic art, street art and even tattoos for their Black Albert and Black Damnation beers.

De Pannepot provides a welcome counterpoint to all this visual violence. Their labels are an ode to the life of a fisherman before the war. 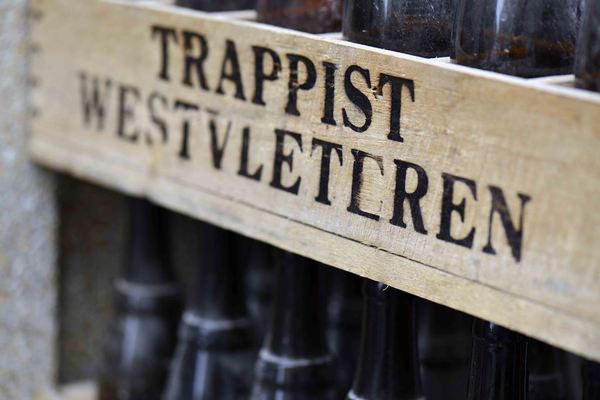 The Abbey of Sint-Sixtus in Westvleteren is happy to distance itself from all this razzamatazz. The bottles containing this Trappist beer that is praised all over the world are as naked as they have ever been.

If you are lucky enough to track it down, you take it away in a wooden rather than a plastic crate.

When you are a legend you can afford this sober approach. Everyone will know that the beer in question is a Westvleteren.

It is only the crown that tells you the strength of the beer in your glass. And why not - a good product will sell itself.

The Trappist beers in general are dedicated to tradition, with a well-known symbolism that won’t be altered in any way. Even if the monks themselves no longer take their place at the brewing kettle, they will carefully consider the brand image.

Why would you print ‘réserve’ or ‘grand cru’ on the label of a run-of-the-mill tripel? After all, it is beer you are selling – not air. Abbey beers, brewed outside the abbey walls but linked to religious houses, will also consult at length with the abbeys involved – if they are still around.