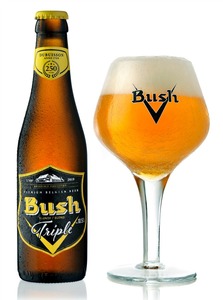 To mark the 75 year anniversary of the Bush beer brand, Dubuisson introduced the Bush Blonde Triple (Scaldis Triple) in 2008. This re-fermented Bush Blonde is available in large bottles (75 cl) that are rather gorgeously decorated, and nicely topped off with a champagne cork.

A triple like this is a heavy, high-fermentation beer, that has undergone re-fermenting in the bottle. Both malty tastes and hop bitters are well developed, but still light and balanced. Most noticeable here is the relatively high alcohol level, and the greater level of carbonation.

The in-bottle re-fermentation allows the Bush Blonde Triple to retain, and enhance, the characteristics of a strong blonde beer – a splendid collar of froth, fine pearlisation, a natural cloudiness, with a rounded taste and tender character.

The Bush Blonde Triple is a high fermentation beer that re-ferments in the bottle.

Water drawn from the brewery's well, candi sugar, barley malt, hops and the brewery’s own yeast.

The Bush Blonde Triple owes its bright blonde colour to the traditional malt varieties and the Saaz hops used during brewing. The refermentation does brings a natural cloudiness to its golden tints.

Bush Blonde Triple is served in the hand-blown, artisanally produced Bush chalice with the typical crackled (or 'craquelé') finish.

Bush Blonde Triple is exceptionally suitable for culinary use. Its low bitterness makes it a perfect ingredient for cooking juices, sauces or marinades, for both meat and fish.

Bush Blonde Triple is a great pairing with egg dishes, luxury vegetables, crustaceans, shellfish, fish accompanied by a sauce, chicken dishes, pizza or pasta with pesto. Recommended with creamy or hard cheeses or to use in a cheese fondue instead of white wine.

The Bush Blonde Triple is only available in bottles (33cl and 75 cl).

Bush de Nuits
The Bush de Nuits (Scaldis Prestige de Nuits) is a variant of the Bush range that was introduced in 2008. Like the Bush Prestige, it spends a long time – six to nine months – maturing in oak barrels, before hitting the bottle. Bu ...