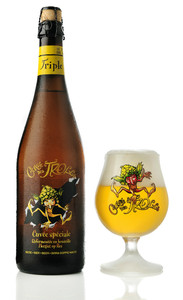 This unfiltered blonde beer is warmly cloudy by nature. It has a full-mouthed mildness married to a fresh taste, with fruity, citrus-perfumed aromas, owing to the use of dried orange peel. As a triple, the Cuvée des Trolls Triple is classed as a heavy, top-fermented beer, that has been re-fermented in the bottle.

That extra ferment helps bring an edge to its subtly bitter and fruity flavourings, as well as adding a little more punch to its carbonation.

The Cuvée des Trolls Triple is an unfiltered, top-fermented beer that re-ferments in the bottle.

Coloured between blonde and amber. Slightly cloudy veil, and a firm froth.

The addition of dried orange peel at the boiling stage produces a pleasantly fruity initial aroma. On the taste, this manages to achieve a pleasing union to the underlying roundess and delicate flavour of Cuvée des Trolls Triple. The re-fermentation in the bottle helps to reinforce those tender and fruity tones.

The Cuvée des Trolls Triple comes only in a large champagne-style bottle (75 cl).

Bush de Noël Premium
This beer is based on the Bush de Noël, a warming Christmas beer introduced by Dubuisson in 1991, which was intended to lighten up the long, dark nights of winter. Such Christmas beers tend to be malty, top-fermented beers with a ...
Facebook
Twitter
Google
Email
Pinterest
GET LATEST BEER NEWS