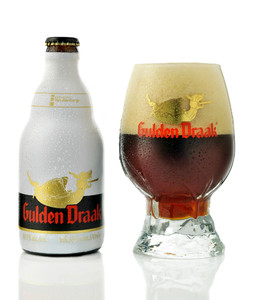 The beer first saw the day of light as a one-off brew commissioned by the mayor of Evergem. It was added to the brewery's regular range when Italian guests of the brewery tried it and liked it so much they insisted on its continued production.

One thing is sure with Gulden Draak, it stands out in a crowd with its white, opaque bottle. Legend has it that the Golden Dragon was the figurehead for the longship used by Norse king, Sigrid Magnusson, on his crusade in 1111.

It is said that this carved statue then made the long journey from Constantinople (Istanbul) to finally settle in Bruges.

When Ghent defeated Bruges in battle in 1382, the carved dragon was confiscated as part of the victors war booty.

In contrast, Gulden Draak beer has plenty of legs in the glass. It is a dark tripel. Wine yeast is used to start the re-fermentation and this is why the term barley wine is sometimes used. The Gulden Draak is also available as a quadrupel, the Gulden Draak 9000.

Gulden Draak has a beautiful dark copper colour. When served correctly in a clean and dry glass the beer gives off regular pearly bubbles below its impressive, long-lasting, creamy caramel-coloured head.

Gulden Draak is served in a unique and specially designed glass, which represents a dragon's egg perched on a rock. Also remarkable is the striking opaque white bottle showing the iconic dragon in full flame.

This beer is an excellent thirst-quencher as well as a full-mouthed and balanced degustation beer. It has fruity (apple and cherry) and zesty aromas.

Gulden Draak can be served as an aperitif or a digestive. It makes a great alternative for whisky in Irish Coffee.

It suits all kinds of stews, especially the renowned dish 'stoverij' (Flemish stew), can be added to red meat sauces such as a bordelaise, and provides a perfect companion for blue-veined Belgian cheeses such as Pas de Bleu from Ghent, Achelse Blauwe (Grevenbroecker) or a (French) Roquefort.

Dessert-wise a great tip is to pair this beer up with dark Belgian chocolate, delicious.

The label says that the beer will keep for 24 months in the bottle. On tap, it will keep for 12 months. The re-fermentation process means that the longer you store the bottled beer, the more the taste evolves.

However, this also doesn't mean you have to keep it for a decade, it's not a gueuze.

Keep your beer in a dry, cool and dark environment for optimal storage (small ones upright, big ones laid down).

This is Brouwerij Van Steenberge's flagship beer and as such you will have no problems getting hold of it. Specialised beer cafés, shops and even supermarkets in Belgium serve or stock this beer.

Due to the extensive export activities of the brewery this beer is also widely available outside of Belgium.

Piraat
Piraat beer was developed and launched in 1982 by Brouwerij Van Steenberghe in Ertvelde, situated near the city of Ghent. This strong amber beer was actually created at the request of the brewery's Italian importer. Interestingly ...
Facebook
Twitter
Google
Email
Pinterest
GET LATEST BEER NEWS