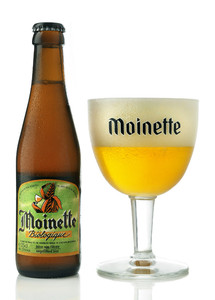 In 1955 Sylva Rosier, the grandfather of current Dupont chief Olivier Dedeycker, launched a stronger version of the Saison Dupont and christened it Moinette. It is an artisan beer, brewed using the same ingredients as the well-known farm beer.

However, owing to its higher strength the beer is brewed with a higher proportion of some raw ingredients, and it ferments in a slightly different way, leading to the formation of different esters.

The end result is a beer that is gentler and also fruitier than the original saison beer.

Moinette is a degustation beer that is eminently suited for laying down.

In 1990, Dupont started brewing organic beers in response to a request from the Malterie de Beloeil, a local malting works. So was born Moinette Bio, to be closely followed by its Saison Dupont Bio cousin.

Brewed with organic ingredients only, Moinette Bio also uses different hop varieties to those used in the classic Moinette.

It requires a great deal of discipline to brew organic beers, but this does not faze a brewery such as Dupont, with its deep roots in brewing tradition. Organic beers now account for around 30% of Dupont’s total production.

A top-fermented beer which re-ferments in the bottle.

This unfiltered beer, with its coppery-blonde colour, fizzes slightly below its frothy head.

Moinette Bio is served in a tulip-shaped glass on a tall stem.

This is a fruity beer with delicate aromas of malt and hops complemented with citrusy impressions.

A subtle, well-hopped and very quaffable beer that owes its complex character to the long, in-bottle refermentation.

This beer makes a great starter to any meal. Alternatively, it teams up very well with meat dishes, loin of pork with Moinette cheese for example.

Or enjoy a glass with just the farm-made Moinette cheese, produced by adding beer to the curds.

Bottled, this beer will keep for 36 months. On tap, it can be stored for 12 months.

Don't store this one any longer than advised; this beer leaves the brewery when it is aged to perfection and ready to be enjoyed.

Moinette Bio is available in 33cl and 75cl bottles and on tap in 20 litre kegs.

The brewery cherishes their small operation which focuses on both tradition and quality and will never compromise these to meet (growing) demand. With that in mind, and although volumes of Moinette Bio are exported, as with all the Brasserie Dupont brews, you won't find it just anywhere.

You will be able to get hold of it in specialised beer café's and beer shops in Belgium and abroad.

Saison Dupont
Saison Dupont is the ultimate reference beer for saisons from Hainaut. Thirty years ago, this farm beer from the western region appeared to be on the way out as sales and popularity declined. Today the saison has made an amazing ...
Facebook
Twitter
Google
Email
Pinterest
GET LATEST BEER NEWS