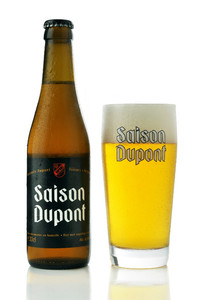 Saison Dupont is the ultimate reference beer for saisons from Hainaut. Thirty years ago, this farm beer from the western region appeared to be on the way out as sales and popularity declined.

Today the saison has made an amazing come-back. Around 20 Belgian saisons are on the market, and this traditional beer style has inspired brewers far and wide to make beers in its image.

Farm beers of this type – light, rather dry but fruity – were traditionally brewed during the winter, ready to quench the thirst of the seasonal field workers during the summer to follow.

Times have changed and saison is now brewed all year around. The main fermentation period is followed by a long, warm maturation stage during which hops are added.

The beer is re-fermented in the bottle, thus increasing its carbon dioxide content, giving it its characteristic zesty and refreshing taste.

Saison Dupont was first brewed in 1844. This copper-blond beer yields amazingly delicate aromas paired with a pronounced hop-bitterness. The house yeast and the local hard water, drawn from a well, play an important role in the creation of this beer.

An in-bottle refermentation makes a major contribution to the development of this complex and highly aromatic beer.

This unfiltered saison remains true to the original tradition of farm beers; its cloudy appearance testament to this authentic production process.

However, this new version is quite a bit stronger and is far more full-bodied than traditional saisons, which were quite similar to the old low-alcohol table beers at around 2-3% ABV.

Saison Dupont is a top-fermented beer that re-ferments in the bottle.

This is an unfiltered beer, coppery-blond in colour with slight pearlisation and a delicate veil underneath a chunky head of froth.

Saison Dupont is served in its traditional, plain, tall branded glass that narrows towards the top, allowing the aromas to come to the fore.

This refreshing thirst-quencher kicks off in quite a tart way with fruity aromas of citrus (lime, lemon, orange), freshly mown grass and hay, characteristic of this type of farm beers.

This slightly sour and rather dry beer displays a pronounced hop bitterness that comes to the fore in the lingering aftertaste.

Saison Dupont makes a great pairing with the cheese of the same name. It also goes very well with the Vieux Moinette. A traditional saison of this type generally teams up well with mature cheeses, whether soft or hard.

This honest ‘working man’s beer’ will also complement a fish soup like a bouillabaisse or traditional brasserie meals, steak and frites for example.

A bottled Saison Dupont will keep for 36 months. On tap, the storage period is 12 months.

The beer is available in bottles of 33cl and 75cl and on tap in 20 litre kegs.

Brasserie Dupont is a microbrewery and safeguarding the quality of what they do produce is a priority. Their Saison Dupont is a hit with farmhouse ale lovers all around the world and the brewery does its best to cater to their international fans' needs by exporting a substantial percentage of production.

You won't find the beer just anywhere but will be able to pick it up in Belgium and abroad too, via specialised beer shops and distributors.

Moinette Bio
In 1955 Sylva Rosier, the grandfather of current Dupont chief Olivier Dedeycker, launched a stronger version of the Saison Dupont and christened it Moinette. It is an artisan beer, brewed using the same ingredients as the well-kno ...
Facebook
Twitter
Google
Email
Pinterest
GET LATEST BEER NEWS