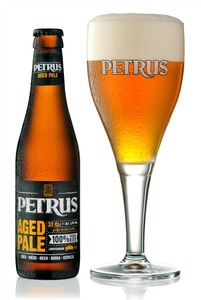 Petrus Aged Pale is the odd one out amongst foeder beers, which traditionally tend to take on a reddish or dark-brown colour in the glass. This beer, brewed using only pale malt, is generally considered one of the best wood-matured pale ales.

It is thanks to the efforts of the late British beer guru Michael Jackson that the beer that flows into your glass is still entirely pure and uncut. Jackson also named it, and was so keen on it that he sold it himself to American beer clubs.

The Petrus Aged Pale has become a reference beer for the sour ale style. It also serves as a mother beer for fresh, freshly sour and sweet and sour blended beers.

Since the 1970s the De Brabandere brewery has been specialising in foeder beers, and has gradually built its range.

Petrus Aged Pale takes on a clear, pale colour in the glass under a head of white froth.

The Petrus beers are served in an elegant, tulip-shaped, branded glass on a tall stem, which allows the aromas to develop beautifully.

Petrus Aged Pale is very astringent and vinous. It is dry with the freshness of sour apples, a real brut de brut.

There are also sherry and fruit flavours. The classic sourness of the beer style comes through in the finish.

Petrus Aged Pale is a great pairing with shellfish and crustaceans, including the grey North Sea prawn, used in a tomaat-garnaal (tomatoes filled with prawns) or in prawn croquettes.

This bone-dry beer stands up well to a mousse of smoked trout with peppery anchovies. It is also recommended with a Belgian soft goat's or sheep’s milk cheese.

The brewery recommends keeping this beer for up to 24 months in the bottle and for up to 8 months on tap (in kegs).

The beer has already been (barrel) aged to perfection so there is no need or benefit to storing it any longer than the brewer advises.

Available in 33cl and 75cl bottles and on tap (30l). Brouwerij De Brabandere is a household name when it comes to Belgian beer so you can discover and taste the Petrus range of beers without too much effort when in Belgium.

De Brabandere export their beers all over the world so you should have no trouble finding Petrus Aged Pale or indeed any of the Petrus beer range.

Kwaremont
The Oude Kwaremont is a cobbled road that ascends steeply for a distance of 2.2 km up the Kluisberg hill in Kluisbergen, East Flanders. Nicknamed the ‘calf biter’, it forms part of the route of the legendary Tour of Flanders cycl ...
Facebook
Twitter
Google
Email
Pinterest
GET LATEST BEER NEWS