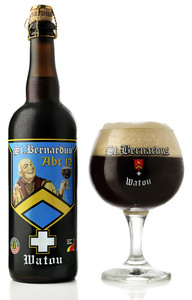 The St. Bernardus Abt 12 is the flagship brew from the range of abbey beers put out by this Watou brewery. This beer is a something of a runaway success, and accounts for more than half of the total brewery output.

The St. Bernardus brews are distinctive, nonetheless. The brewers here make full use of the slightly salty, but soft, water originating from the local well. Westvleteren's brewery, by contrast, simply uses water supplied by the local town.

The Abt 12 is a classic Belgian dark quadrupel, with an alcohol content of over 10% ABV. It has been brewed here since 1946, on the basis of the original recipe compiled by the Westvleteren monks.

A less well-known fact: the laughing monk on the label has been known to give a saucy wink. But when can you catch it? Well, it's reckoned that the winking monk can be spotted on every 1000th bottle that rolls of the production line in the bottling plant.

A deep-golden brown colour with a frothy collar of café crème.

The St. Bernardus Abt 12 has a somewhat surprising aroma of honey and frangipane. The roast malts allow touches of caramel and chocolate to come to the fore. This is a balanced beer, with plenty of body, where the hops make themselves felt, without taking over the show. This beer also gives that characteristic, slightly salty impression, owing to the well-water used in its brewing.

In the kitchen, this beer forms a perfect combination with classic stews, such as a rabbit and prune casserole. Blue cheeses of the Roquefort type also make for an ideal pairing, and don’t overlook chocolate for an unexpected but very successful combination. For example, a sip with a ‘chocolat-moelleux’, with those red fruits at its centre, provides a perfect contrast to the richness of the chocolate and the refreshing taste of the fruit.

Can be stored in the bottle for 60 months. On tap, the recommended storage time is 12 months. Some beer-lovers like to store this beer for longer but, as always, doing so is really down to your own personal preference.

St. Bernardus Abt 12 is available bottled (33cl, 75cl, magnum, methusalem) and on tap (20L). This brewery’s beers find their way around the world thanks to its strong export activities. The Abt 12 is a popular beer in Belgium, so won’t be hard to find in plenty of beer-oriented cafés. It is also widely distributed in supermarkets and local stores.

St. Bernardus Tripel
Between 1946 and 1992 the Sint-Sixtus Westvleteren abbey beers were brewed by the Sint Bernardus brewery. When the monks of Westvleteren decided to start brewing their beers within the abbey walls again, Sint Bernardus were concer ...
Facebook
Twitter
Google
Email
Pinterest
GET LATEST BEER NEWS