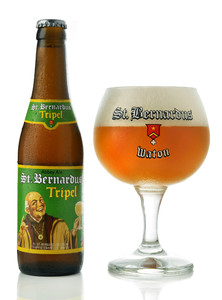 Between 1946 and 1992 the Sint-Sixtus Westvleteren abbey beers were brewed by the Sint Bernardus brewery. When the monks of Westvleteren decided to start brewing their beers within the abbey walls again, Sint Bernardus were concerned about falling sales.

This gave rise to the idea of producing a blond tripel to join the ranks of the dark Pater 6, Prior 8 and Abt 12. The St Bernardus Tripel, introduced in 1992, is a classic Belgian tripel.

Perhaps surprisingly, its taste profile shows strong similarities with that of the St Bernardus Prior, which is brewed with largely the same ingredients. Why don’t you carry out your own taste test?

Pour one of each into a dark glass at the same time and compare the two.

The main characteristics of the St Bernardus Prior 8 are touches of roast malt and, in the finish, impressions of banana. The St Bernardus Tripel is slightly maltier.

Thanks to their in-bottle re-fermentation the St Bernardus beers develop a natural, silky-soft froth that clings to the glass and preserves the aromas beautifully.

Since 2010 the beers have been brewed using hops that St Bernardus grow themselves, right next to the brewery. This tripel has become very popular in its own region, the Westhoek.

You will find it on tap in most local cafes, including those on the schreve as the border with France is called.

The original house yeast from the Westvleteren Sint-Sixtus abbey is still used for the main fermentation with a different yeast added before re-fermentation.

This beer is copper-blond to slightly amber in colour with delicate pearlisation underneath a sturdy head of froth that preserves the aromas very well.

St Bernardus Tripel should be poured into the traditional St Bernardus goblet that was developed especially for abbey beers.

St Bernardus Tripel is rich with fruity aromas, before delivering a successful balance between hops, malt and yeast and a subtle bitterness that is also noticeable in the finish.

The St Bernardus abbey beers have a slightly salt touch that comes from the water used in brewing.

St Bernardus Tripel makes an excellent culinary pairing with white fish as the beer highlights the fish’s underlying flavours. It is also recommended with meat dishes: a leg of lamb roasted in honey for example.

This tripel also stands up well to spicy eastern dishes, the zestiness of the beer balances out the piquancy of the dish.

Can be stored for 60 months in the bottle. Will keep on tap for 12 months. Don't keep the beer longer than advised by the brewery; it is a tripel and not crafted for ageing.

The St.Bernardus Tripel is available in both bottles (33cl,75cl) and in kegs (20l) and is widely available across Belgium. Certainly throughout the Westhoek area you will find quite a few cafés serving this beer on tap.

The Sint Bernardus brewery also exports a good volume, so you will find this beer outside of Belgium. However, due to the increased popularity of their beers in recent years there can sometimes be a shortage of supply which can limit availability.

St. Bernardus Abt 12
The St. Bernardus Abt 12 is the flagship brew from the range of abbey beers put out by this Watou brewery. This beer is a something of a runaway success, and accounts for more than half of the total brewery output. It's by no me ...
Facebook
Twitter
Google
Email
Pinterest
GET LATEST BEER NEWS