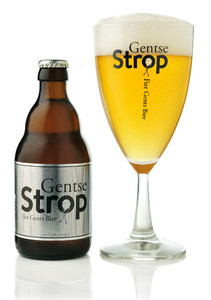 The Gentse Strop, introduced in 2011, is one of Brouwerij Roman's most popular beers, and a reminder of the historic ties between the cities of Oudenaarde and Ghent. Just what are these ties? Well, Emperor Charles V's home town was Ghent, while his daughter, Margaret of Parma (born out of wedlock), was born in Oudenaarde.

In 1545, just a few years after this defining event, and with Charles' punishment of Ghent still a fresh memory, Oudenaarde welcomed the founding of Brouwerij Roman. Centuries later the brewery is still going strong and is a member of the Belgian Family Brewers, a select marque, which stands for tradition, quality and authenticity.

With Gentse Strop, Roman has aimed to create a beer to match the rebellious character of this historic medieval city, and its feisty inhabitants of course... The city of Ghent was declared "the world's third-most authentic city" by Natural Geographic Traveler magazine, back in November 2008. And since 2011, it has also had this most authentic of Belgian blonde brews proudly bearing its name.

Brewed with wholly natural ingredients: water drawn from the brewery's well, plus malt, hops, sugar, and a strain of one of the brewery's own house yeasts.

This Belgian strong blonde is a clear, golden-blonde colour and, when poured and served correctly, is crowned by a firm white head.

It also possesses a finely wrought, and ever-so delicate, pearlisation.

In common with most Belgian beers, Gentse Strop is served in its own elegant, branded, tulip-shaped glass, with a long stem, developed and designed by the brewery itself.

The use of high-quality aroma hops results in delicate fruity aromas with a subtle hop bitterness.

This carries on into the beer's taste and its smooth, dry finish: remarkably zesty touches are provided with a dash of mild pepper and coriander.

This beer stands up well to robust flavours. Think of a creamy risotto with dried lime and smoked game, its taste enhanced by cool, fresh herbs.

But just as beauty is in the eye of the beholder, feel free to experiment with this beer in the kitchen, either as an added ingredient or as the perfect pairing to one of your favourite dishes.

Gentse Strop will keep for 24 months in the bottle, if stored correctly in a cool, dry and dark environment. This is a beer that will not improve when stored longer, however.

Gentse Strop is widely available in Belgium through the usual channels of beer-shops, supermarkets and specialised beer cafés. Certainly, in and around Ghent, it's not difficult to find this beer.

The Roman brewery also exports their beers abroad, so even outside Belgium you should be able to lay your hands on some Gentse Strop.

Ename Pater
The name of the officially recognised Ename abbey beers comes from the former Benedictine Abbey of Ename, close to the Roman Brewery near Oudenaarde. Ename abbey was demolished in 1797 during the days of the French revolution, a ...