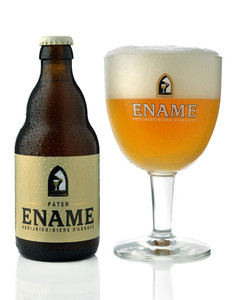 The name of the officially recognised Ename abbey beers comes from the former Benedictine Abbey of Ename, close to the Roman Brewery near Oudenaarde.

Ename abbey was demolished in 1797 during the days of the French revolution, a time when many Belgian abbeys were closed or even razed to the ground. Later excavations at Ename brought to light a small harbour town dating back to the early Middle Ages.

The foundations of the abbey and the remains of that town are now an archaeological park.

This newcomer, Ename Pater, is the odd one out amongst the Ename abbey range, with a notably lower alcohol content than its brother beers. This is a very definite choice by the Roman brewery, who want to take advantage of the growing demand for lighter but characterful beers.

Pater undergoes less filtering than the other Ename abbey beers, and is cloudy in the glass. Its well-balanced taste is characterised by a subtle zestiness and a hoppy, dry finish that is due to dry hopping at the end of the boiling process.

Ename Pater is a top-fermented beer that is unfiltered and re-ferments in the bottle.

This is a cloudy blond beer that will produce a stable head of froth when poured correctly into a clean, hand-washed glass.

All of the Ename beers are served in a classic chalice, designed especially for this brand. It is a characteristic design for Belgian abbey beers.

Ename Pater has a beautiful blond-cloudy colour and a remarkably fresh aroma. It has a balanced taste, characterised by a subtle zestiness and a hoppy, dry finish.

The use of dry hopping yields a delicious aroma and a superb taste that makes you thirsty for more.

This beer is rather more suitable as a quaffable, thirst-quenching table companion than as an ingredient for culinary use.

Thanks to its subtle zestiness and dry finish, Ename Pater makes a great match with refined fish preparations and roast meats. In other words, it is ideally suited to a summery BBQ.

Bottles can be stored for up to 24 months. The characteristics of this Belgian beer, including its relatively low alcohol content compared to the norm in Belgium, mean it should be drunk and enjoyed fresh.

There is no point in storing it for a long time.

Ename Pater is available in 33cl bottles. It was launched relatively recently. Nevertheless, it is easy to get hold of through the usual channels, specialised beer stores and selected supermarkets.

The Roman brewery is an active and successful exporter, so you will be able to track down this beer in many countries outside of Belgium.

Ename Blond
1990 was an important year for Brouwerij Roman, as they launched a triumphant trio of abbey beers: Ename Blond, Dubbel and Tripel. The launch coincided with an open air spectacle held amongst the abbey ruins. The, ...

Rebelse Strop
When, in the 16th century, the proud citizens of Ghent refused to bow their heads to the mighty Emperor Charles V, he decided to punish them for their stubbornness. He made them parade with a noose around their necks, hence the c ...
Facebook
Twitter
Google
Email
Pinterest
GET LATEST BEER NEWS