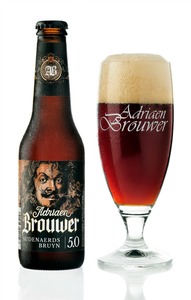 In 2003 the Roman brewery – in business since 1545 and a proud member of the Belgian Family Brewers association – relaunched its popular 'Roman Oudenaards bruin' as 'Adriaen Brouwer'. The new name refers to the famous 17th-century painter from Oudenaarde. Adriaen Brouwer was well-known for his sensual works, and also for a love of life that allegedly saw him spending much of his time in ale houses.

This regional speciality beer is different from other brown beers to be found in and around Oudenaarde. For instance, the malt used when crafting Adriaen Brouwer is oasted for a slightly longer period – and at a higher temperature – giving this beer its darker, distinctive colour.

It is brewed using the hard spring-water of the Flemish Ardennes, the geographical region where the brewery is located. In addition, the Roman brewing process introduces a pure yeast, whereas other breweries in the area rely on the spontaneous fermentation caused by wild yeasts.

Another difference is that the brewer doesn't blend young beer with an older brew. Such practices are common for the sour beer-style known as 'oud bruin' or 'old brown'. The resulting Oudenaards bruin is a top-fermented beer with a pleasant taste, that only verges on the sour.

Adriaen Brouwer is a top-fermented beer.

Adriaen Brouwer is exclusively brewed at Brouwerij Roman with water drawn from the brewery's own well, plus malt, hops, sugar and the Roman house yeast.

This beer is a warm red-brown in colour, topped with a pale beige head of froth.

Adriaen Brouwer is served in its own elegant, long-stemmed, tulip-shaped glass. The glass is somewhat different to the one used for the sturdier Adriaen Brouwer Dark Gold.

The aromas of roast and burnt malt are very noticeable, as are the impressions of hops and caramel.

The initial taste is as soft as butter, followed by a bitter aroma with hints of fruit and a touch of sourness, all ending with a slightly bitter finish.

Adriaen Brouwer will complement sausages with puréed apple and raisins on the side. It also goes very well with a steak-and-fries combo.

Always remember, though, that with beer pairing much comes down to individual taste and preferences, when searching for that perfect match. In the end, there's a beer out there to match any dish, so never fear to indulge in the odd experiment!

Adriaen Brouwer keeps for around 10 months in the bottle, and up to 7 months on tap. Taking into account its lower alcohol content, and its general character, there's no point in keeping this beer for any longer than the brewer advises.

For optimal keeping, try and store your bottles upright in a cool, dark and dry place.

The classic Adriaen Brouwer is available in 25cl bottles (and on tap in 20-litre kegs) in many speciality beer cafés and shops, especially in Flanders, but also across much of Belgium.

Those beer-lovers outside of Belgium (and not planning an immediate visit) should have no trouble finding this local speciality from Oudenaarde, which is widely exported by the Roman brewery.

Adriaen Brouwer Oaked
Adriaen Brouwer pays homage to the 17th century artist and painter, born and bred in Oudenaarde, who immortalised the five senses. The artist gained a reputation as a ‘bon vivant’ and his numerous scenes of life at the inn tell...

Ename Blond
1990 was an important year for Brouwerij Roman, as they launched a triumphant trio of abbey beers: Ename Blond, Dubbel and Tripel. The launch coincided with an open air spectacle held amongst the abbey ruins. The Ename...

Ename Pater
The name of the officially recognised Ename abbey beers comes from the former Benedictine Abbey of Ename, close to the Roman Brewery near Oudenaarde. Ename abbey was demolished in 1797 during the days of the French...

Ename Dubbel
History and beer often go hand in hand when it comes to Belgian beer. That's undoubtedly the case with the Ename Dubbel, a dark abbey beer that shares an interesting back-story with the rest of the Ename family, the Tripel, Cuvée...
Facebook
Twitter
Google
Email
Pinterest
GET LATEST BEER NEWS