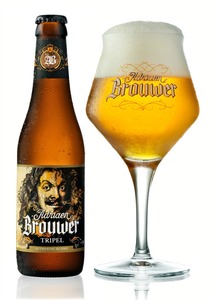 Adriaen Brouwer Tripel is the odd one out in the eponymous range offered by the Roman brewery. It was named after the 17th-century artist from Oudenaarde.

To paint his scenes from daily life, he frequented quite a few inns.

His self-portrait on the label gazes at you intensely. Both the classic Adriaen Brouwer and the wood-matured Adriaen Brouwer Oaked are slightly sour ‘Oudenaards Bruin’ beers (brown beers from Oudenaarde) brewed with the mineral-rich spring water procured from the Flemish Ardennes.

The 100% organic Adriaen Brouwer Tripel is a strong blonde Belgian tripel. The malt and hop used in brewing are completely organic.

Adriaen Brouwer Tripel falls into the category of zestier Belgian tripels that are very popular in Belgium and far beyond its borders.

Over the years the Roman brewery has gained plenty of experience in brewing strong blonde degustation beers such as these; they also brew the Ename Tripel abbey beer and the Gentse Strop city beer.

The term ‘tripel’ is used to denote a higher dosage of ingredients.

A tripel is a strong beer, usually blonde in colour, with a predominant taste of malt and/or hop bitters.

This tripel takes on a lovely coppery-blonde colour when poured and shows mild pearlisation underneath a robust and creamy collar of froth.

Adriaen Brouwer Tripel is served in an elegant, contemporary chalice on a tall stem that retains the aromas to the full.

Full in the mouth with quite a powerful taste, spicy accents (coriander, bitter orange peel), mildly phenolic, a subtle finish with some added hop bitterness.

Goes well with whiting with puree of water cress and creamy fennel, with a fish stew (cod and mussels) au gratin or with a turkey gyros with rice and vegetables.

This beer will store in the bottle for 24 months. Inherent to the beer style this is one was brewed to drink fresh and not to store.

Available in 33cl and 75cl bottles. As with the Classic Adriaen Brouwer this one will be relatively easy to find in and around Belgium via the usual channels.

Gentse Strop
The Gentse Strop, introduced in 2011, is one of Brouwerij Roman's most popular beers, and a reminder of the historic ties between the cities of Oudenaarde and Ghent. Just what are these ties? Well, Emperor Charles V's home town ...