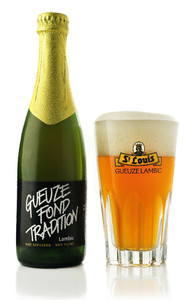 This gueuze is a completely different beer compared to the St. Louis Premium Gueuze. This beer was created as the result of a challenge.

During a brewery visit by Professor Gilbert Baetslé with a group of Hogeschool students from Ghent, Jef Van den Steen made a comment to Luc Van Honsebrouck to the extent that his Gueuze Saint Louis would go up various notches in the estimation of beer lovers if he could manage to produce an unfiltered Gueuze Saint Louis with in-bottle re-fermentation.

Luc Van Honsebrouck (never averse to a stunt) took up the challenge and even promised Jef he would be the godfather of the new beer.

And, as usual, Luc was true to his word: in ’97, five years after taking up the challenge, the Gueuze Saint Louis Fond Tradition was introduced to the market.

This took place at the family castle in the presence of, amongst others, the well-known beer hunter Michael Jackson.

The Fond Tradition is brewed on a very small scale and is not heavily promoted. The brewery has no wish to enter into competition with the small breweries in the Pajottenland region as they have a lot of respect for them.

This is a delicious thirst quencher and is also highly valued by connaisseurs. After all, a traditional gueuze produced in West Flanders is unique.

To produce this gueuze, artisanally brewed lambiek is matured in oak barrels, which gives the spontaneous fermentation. The beer will then undergo a second fermentation in the bottle.

The “Gueuze Fond Tradition” is neither filtered nor sweetened, in contrast to the St. Louis Premium Gueuze.

The Fond Tradition is created through mixing old and young gueuze. The lambiek used for this gueuze is traditionally brewed using barley malt, unmalted wheat and a large quantity of (older) hops.

This is a golden blond beer, obviously slightly less clear than the Premium Gueuze. Gives a beautiful snow-white frothy collar.

In common with the Kriek Lambic from St. Louis this beer is served in a glass that is different from the “Premium” range drinking vessel. The glass is very similar to that used for the Bacchus beers.

A modest nose with lots of fruit and a dominant aroma of young sour apples. Bone dry aftertaste which makes you want to have another sip straight away.

This beer was not designed for gastronomy when it was developed in the 1990s by Luc Van Honsebrouck. Nevertheless, it is a refreshing degustation beer aimed at genuine gueuze lovers.

Gueuze is well-known to be the ideal aperitif to stimulate the appetite and this Fond Tradition is no different. Owing to its acidity, this beer makes the perfect companion for desserts comprising fresh fruits such as mango or strawberries.

Also, it is the perfect beer to have with a choice of asparagus dishes.

The brewery only introduces this beer to the market when it is perfectly matured and ready to drink. Therefore, further storage is not necessary.

However, it is well known that a (good) gueuze can be stored for up to 20 years. Up to the beer lover to put this to the test.

Castle Brewery Van Honsebrouck is only brewing this beer on a very small scale. Only a few dozen hectolitres are bottled every year. The Fond Tradition represents only a small percentage of the lambiek beers that leave the brewery every year.

Thanks to the brewery’s successful export activities this beer can also be found outside Belgium.

Barista
Kasteel Barista Chocolate Quad is the successor to Kasteel Winter, a seasonal beer that has been discontinued. Barista is a dark degustation beer that can be enjoyed all year long - on an outdoor terrace or in front of an open fir ...
Facebook
Twitter
Google
Email
Pinterest
GET LATEST BEER NEWS